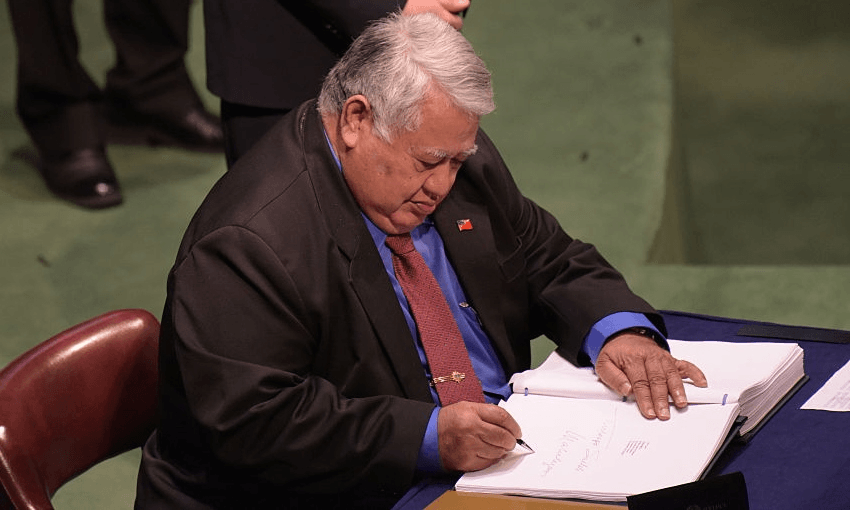 The Bulletin: Sāmoan politics plunged back into crisis

Good morning and welcome to The Bulletin. In today’s edition: Sāmoan politics plunged back into crisis, Act proposes way to get to a four year term, and top martial artist dies after alleged unprovoked assault.

I’d like to say that what you’re reading is the most up to date information on a constitutional crisis taking place in one of our important neighbouring countries. But such is the fluidity of events in Sāmoa right now, it’s really hard to know how if that’s true. Over the course of a wild weekend, events around the swearing in of the next parliament changed dramatically every few hours or so, leaving little clarity about what happens next, and who has the right to wield power.

So, what’s going on? The simplest way of putting it is that there has been a struggle over who has the right to decide whether or not parliament convenes today. The Head of State, Tuimalealiifano Vaaletoa Sualauvi, and the speaker of parliament say they have the right to suspend parliament. The Supreme Court disagrees. The lead, as it were, has changed hands several times over the weekend. At stake is basically the formation of the next government, because based on the current election results, the opposition FAST party will have a slight lead over the incumbent HRPP, who have governed for many decades. Sina Retzlaff of the Samoa Global News has a piece that captures some of the chaos.

FAST leader Fiame Naomi Mata’afa has gone so far as to call it a “bloodless coup”. Newshub’s Laura Tupou reported last night that the PM-in-waiting suspects that this is being done to protect the 23 year reign of PM Tuila’epa Sailele Malielegaoi. And there have been some seriously worrying developments on that front – in the last week, RNZ Pacific has reported that media were blocked by police from covering proceedings, and that PM Tuila’epa has claimed to have been “appointed by God”, and thus by implication above the law. He has also refused to be sworn in if parliament does convene tomorrow. As said up top, it isn’t remotely clear what happens next, but Radio NZ’s news bulletins this morning included a line about how supporters of both major parties intend to march on parliament today.

An interesting idea about how parliament works that is worth debating: The Act party has proposed that a move to four year terms should be accompanied by reform of the select committee process, so that the opposition has majorities on committees. Party leader David Seymour outlined the idea on Newshub Nation. Electoral law expert Andrew Geddis has some thoughts on both points, and gets into some of the more technical details of the Act proposal.

I’m not that keen on the first part of it, but as a conversation starter, I’ll set out two examples why the second part could work: Firstly, the Epidemic Response Committee chaired by then-leader of National Simon Bridges provided valuable and constructive scrutiny of the government during the emergency phase. And secondly, committees controlled by the Labour majority have occasionally been guilty of taking the piss this term, and wasting everyone’s time in the process. Your thoughts are welcome – thebulletin@thespinoff.co.nz.

A top martial artist has died in hospital, a week after an alleged unprovoked assault in Auckland. The NZ Herald reports four men have been arrested and charged in relation to the death of Fau Vake, 25, and further charges are likely to be laid against them. Vake was allegedly hit in the head from behind, and the story is likely to lead to debate about whether new laws against such actions are necessary, or whether they can be properly prosecuted under existing legislation. Vake was a father, and a popular member of the City Kickboxing gym, where his loss is being deeply mourned.

Some criticism has been coming in on the government’s plans for an “immigration reset”, announced last week. Farmers Weekly reports farming representatives have described the plans as “bewildering” and “disappointing”, with the sector facing a severe labour shortage. And on the level of the people affected, I’d highly recommend this opinion piece by Stuff’s Dileepa Fonseka, who writes about how migrant workers have already been put through the wringer, and many now fear that their lives are going to get much more difficult.

Rates of interest in getting the Covid vaccine among Pasifika people have gone up sharply in recent weeks. Radio NZ reports this is being attributed to the support of church leaders in the rollout programme, particularly in convincing those who are hesitant that it is safe. In terms of the nationwide figures, the NZ Herald reports more than three quarters of the country say they’re happy to be vaccinated, and just over 500k doses of the vaccine have now been administered.

More problems are expected this week in the Waikato DHB system, after last week’s major ransom attack on the computer network. Radio NZ reports there is still effectively no computer system to work with, and as a result only a small fraction of elective surgeries can be carried out. In a related piece, cyber security expert Laura Bell writes about what the Waikato DHB attack can teach us all about online protection.

Sheep stereotypes may need to be retired, because New Zealand’s total flock continues to shrink, reports Farmers Weekly. There’s a range of causes, including drought, forestry encroaching into the sort of high country land sheep normally get run on, and low wool prices. This in turn could force changes to the lamb slaughter schedule, because of lower numbers.

Right now on The Spinoff: Auckland Pride director Max Tweedie look at what what was in Thursday’s budget for Aotearoa rainbow communities. Vanessa Cole of Auckland Action Against Poverty criticises the thinking behind the proposed social insurance scheme. Michael Andrew and Leonie Hayden report on a rare strike taking place among H&M workers. Peter McKenzie writes about the decline of cinemas, and warns about what will be lost when they’re gone. Alex Casey looks back on the time Hollywood star Kate Winslet went on a shopping spree in Masterton. David Klein goes back into the Nga Taonga archives to see if an old Aunt Daisy recipe for blancmange still holds up. And we’re lucky enough to present an excellent but sadly disqualified entry into the 48 Hour Film Festival – a Christchurch musical called Trolley King.

For a feature today, a look at the controversial recent career of a scientist who has been latched onto by opponents to the government’s Covid strategy. Stuff’s Charlie Mitchell has gone down the rabbit hole on Dr Simon Thornley, of the Plan B group, who has been ostracised by many of his peers over the last year. It’s a great piece that explores the concept of contrarianism in academia, and the nature of consensus and debate between scientists. Here’s an excerpt:

Science is not inherently neutral; the way it is presented and communicated is shaped by the scientist and their values. Being aware of, and acknowledging, those values is important, [Dr Shaun] Hendy says.

“No doubt they [Plan B] feel very strongly about the position they’re presenting, but whether they fully understand the trade-offs, and the role of their values in the choices they’ve made in the way they present the science … I struggle a bit with that.”

The calculus in deciding whether to respond to Thornley and Plan B became easier as the pandemic progressed. The post-lockdown media blackout had sidelined Thornley, essentially de-platforming his ideas.

In sport, please allow me to draw your attention to the sporting perfection on display in Wellington on Saturday night. The Wellington Phoenix kept their A-League playoff hopes alive with a 3-0 demolition of Western United, in what was their first true home game for well over a year. I went along to embed myself with the Yellow Fever supporters group – here’s my report on a remarkable, rich and compelling evening. My thanks as well to John, Dale, and everyone else who was so welcoming on the day. As for those playoff chances, the Phoenix have to fly back to Australia for a midweek fixture, then are playing in Auckland this Sunday – both are probably must-wins.