I first heard about it from Jacinda Ardern. “This will not be a blancmange campaign,” she said in her first press conference as Labour leader. I didn’t know what that meant, but it did make me wary of blancmange.

Fast forward a couple of years and some of the comms staff decided to dig through the archives for culinary inspiration, and Aunt Daisy seemed the obvious go-to. The legendary broadcaster’s radio show on the ZB network provided tips, advice and recipes to the nation for decades. These tips and recipes endorsed many products and brands in an advertorial style, and Te Ara notes that “it was not unknown for a new product she had mentioned in the morning to be sold out the same afternoon”. An enormously popular broadcaster, “her fame [was] limited only by the restricted transmission range of the station”, says Te Ara.

I found her rapid pace and “can do” attitude were indeed irresistible and I enjoyed following along to an archival recording from Wednesday 15 February, 1950. The blancmange recipe she provided seemed achievable, though it came with a hearty endorsement for Brown & Polson’s Cornflour – a product I’ve not come across in New Zealand. 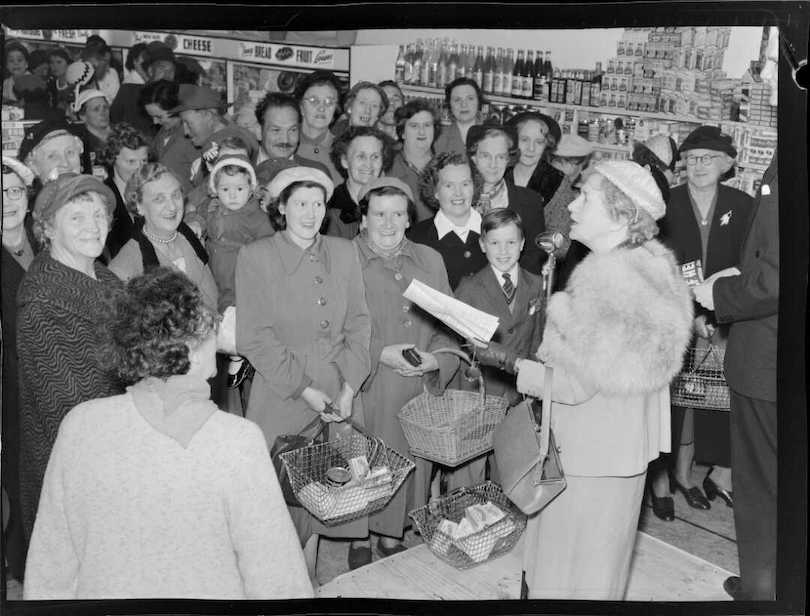 My culinary recreation 70 years later was like travelling to a foreign country, and many things that would’ve seemed obvious to Daisy’s daily listeners were new to me. At the time of broadcast, the country was still under wartime rations, so I was unsure how to interpret directions to use “as much butter as you can spare”. The dessert can chill in the fridge “if you have one” and NZ History does note that “in 1959 only 54% of New Zealand dwellings had […] a refrigerator”. I also had to look up how much a pint was (568ml).

Overall, I did feel like I was flying blind: not having had blancmange before, I wasn’t sure what I was aiming for. Pictures from recipes made by modern chefs show photos of perfectly white, firm puddings holding their shape after popping out of the mould.

Nevertheless, they’re very easy to assemble and their few ingredients are staples of many homes. I successfully heated the milk, and adding some warmed milk to form a cornflour paste was an inspired move – no lumps! Combining all the ingredients (including some lemon rind) and boiling for three minutes, it was exciting to see that things were thickening – I was on my way, perhaps, to a solid, milky dessert.

I made a half-sized version that filled just the bottom third of my bundt cake pan and I did wonder about getting it out. I was also unsure about how long to cool the blancmange, as Aunt Daisy didn’t provide many details – perhaps contemporary listeners just knew. I left mine in the fridge for a few hours.

While it was chilling, my housemates asked, “Can’t you make something… tastier?” My meal plan had been met with a mixture of confusion and caution. It was new territory for all of us, blancmange seeming to belong to a previous generation – which was reinforced by a quick poll in the office.

Saturday night. A special dessert for my sceptical housemates. I flipped it onto a plate and heard a splat. “That sounds promising,” my partner said. It didn’t live up to the promise as I unveiled this sad circle: The blancmange tasted like not-sour lemon yoghurt. It was very sweet, much more so than I would’ve expected with so little sugar – a few mouthfuls were enough. No one else was very keen and I was glad I had used a reduced recipe. Overall, this was a reasonably tasty, easy-to-make dessert, and with a bit more practice it could be something really special. However, I don’t think I’ll be having a second attempt – now I know what Jacinda means.

Want to have a go at cooking by ear? Listen to episodes of Aunt Daisy’s show here, and if you cook one of her recipes, let us know how it turned out! Below is the blancmange recipe that defeated David.

Heat the milk in a pan – once lukewarm, mix a small amount with the cornflour in a small bowl to form a paste. Bring the milk to the boil and add the cornflour paste and all other ingredients. Lightly boil for three minutes. Pour into a wet bundt pan, or mould of your choice.

Optional flavours (such as a lemon rind or vanilla pod) can be added to the boil.

This piece was originally published by Ngā Taonga Sound & Vision