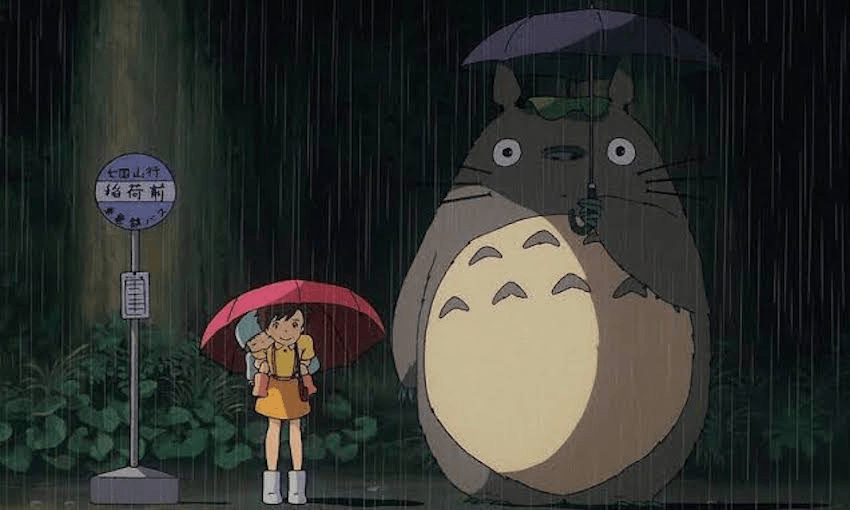 One of the most famous images from My Neighbour Totoro, which comes to Netflix today.

What Studio Ghibli did for me and my mother

One of the most famous images from My Neighbour Totoro, which comes to Netflix today.

Sam Brooks makes the case for raising your kids on the exquisite Japanese anime films, which have just landed on Netflix.

A girl waits at a bus stop in the rain, barely fitting herself and her little sister under an umbrella. Next to her sits a large creature halfway between a bear and beachball. He has a leaf on his head that is meant to protect him from the rain, but barely covers it. More and more rain falls on his leaf, prompting him to jump in the air and cause a torrent of rain to fall from the sky. He smiles, dumbly. A catbus (literally a cat that is a bus) screeches to a stop near them. The bearball gets on the catbus, still smiling dumbly.

That’s probably the most famous scene in Studio Ghibli’s beloved animated film My Neighbour Totoro, and is an ideal showcase for both film and studio. It demonstrates the way that in Studio Ghibli films, reality and fantasy exist in conversation with each other – almost as if one isn’t possible without the other. It also captures Ghibli’s unique, off-the-wall sensibility – one that can resonate with nearly anybody, from any culture and of any age.

Studio Ghibli is probably the closest that anime (a specifically Japanese form of animation) has ever gotten to both mainstream success and critical acclaim. Co-founded in 1985 by directors Hayao Miyazaki (My Neighbour Totoro, Spirited Away, most of the studio’s popular output), Isao Takahata (Grave of the Fireflies, Only Yesterday) and producer Toshio Suzuki (all of Ghibli’s output), the studio went on to strike genuine box office gold across the world, win a few Oscars, and a carve out a permanent place in fans’ hearts. While Ghibli had a dedicated fan base, it was the global success of 2001’s Spirited Away that propelled it to another stratosphere. The film remains the only hand-drawn and non-English language animated film to win the Academy Award for Best Animated Film.

So it’s little surprise that people went a bit nuts when Netflix announced that they’re bringing 21 Studio Ghibli films  to the platform over the next three months, with the first seven arriving today. Those 21 films represent almost the studio’s entire catalogue; presumably due to rights issues, Grave of the Fireflies, by far the bleakest mainstream animated film ever to exist, is not part of the deal. The films haven’t been inaccessible exactly, but outside of DVDs and the occasional film society screening, they haven’t really been widely accessible either, especially if you’ve been looking for the more obscure ones (ie, pretty much everything beyond Spirited Away and My Neighbour Totoro).

There are two fairly obvious reasons why Studio Ghibli’s films are so beloved. The first is that they’re instantly recognisable. Even though the films cover the entire colour palette – compare the candy-corn pops of colour in Howl’s Moving Castle to the softer pastels of Only Yesterday – there is a care and a rhythm to the animation that makes these films look unlike anything else. Notably, Hayao Miyazaki personally coloured nearly 90,000 of the 144,000 frames that make up Princess Mononoke, an environmentalist plea that was decades ahead of its time. These are films that have been given love in the making, and it’s returned tenfold by their audiences.

The other thing that makes Studio Ghibli films so special is the way that fantasy and reality are approached with equal gentleness and care. A child’s parents being turned into pigs has as much emotional heft as children coming to terms with a terminally ill mother. Talking creatures aren’t fussed over as they are in most kids films; they’re simply a part of the world. Wonder exists in the same world as nostalgia – they’re things to be embraced, not things to make an event of. Fantasy isn’t an escape – it’s part of what makes a full life, a full world.

What makes these films special to me, and millions of others, is their complete lack of condescension. As a child, I was forbidden to watch Disney films by my mother. Her reasoning, I think, was half that she didn’t want to be stuck watching the same sentimental, mind-melting films over and over again, and half that she didn’t want me to be indoctrinated with Disney’s questionable messages. And fair enough. I didn’t see Aladdin until I was 18 and I sorely wish I could scrub the tuneless meander that is “A Whole New World” from my memory.

But a child is still, you know, a child. And while I do remember going to The Piano when I should’ve been, I don’t know, finger-painting or frolicking among the flowers, there were also times when my mother was forced to acknowledge that I was a child who liked bright colours and fantasy creatures. So Studio Ghibli became a kind of bridge between us.

We watched Princess Mononoke and delighted when we recognised Gillian Anderson’s voice. We watched Kiki’s Delivery Service, and both cried at the ending – not quite happy, but full of hope and promise. We watched My Neighbour Totoro, arguably the most pleasant way to spend 88 minutes ever invented, and she cackled when the catbus came onscreen, quite rightly.

I love all those films, but the one that sticks with me most is possibly Ghibli’s least-heralded: 1991’s Only Yesterday (which, to my delight, is among the first batch dropping on Netflix today). It eschews the fantasy of most of the 20 other films to tell a very simple story. Taeko, a 27-year-old woman, travels to the country and reminisces about the hardships of her youth. It’s the kind of thing that people don’t think animated films can be about. There’s no hijinks, no hack pop culture references, and no pandering. Beautifully and with an incredible eye for detail, it tells the story of a woman figuring out what she wants in life.

It is a startling realistic story, and one that I can’t imagine any child could reasonably be expected to enjoy. But when I watched it on a shitty, probably dodgy VHS with my mother – who I’m sure at that time had lot more understanding of a 27-year-old woman than I did – I could feel another bridge being created between us. On some level, I understood her more, and she understood that this medium that she’d written off as being for children could do something more. It’s one of the most deeply profound experiences I’ve ever had while watching a movie. I cherish it.

I think that’s what Studio Ghibli does best, ultimately. It builds bridges. Between reality and fantasy. Between parents and children. And finally, somewhere in the brains of the people who watch them, it builds bridges of understanding. Empathy, compassion, all that jazz. They’re built into the DNA of Ghibli’s work, and that’s something to admire and love before you realise you’re watching a film featuring a demented cat-bus hybrid.

And thank god, Elsa’s nowhere to be seen.

You will eventually be able to watch nearly all of Studio Ghibli’s films on Netflix. Seven films arrive on the service today, seven on March 1 and seven on April 1.