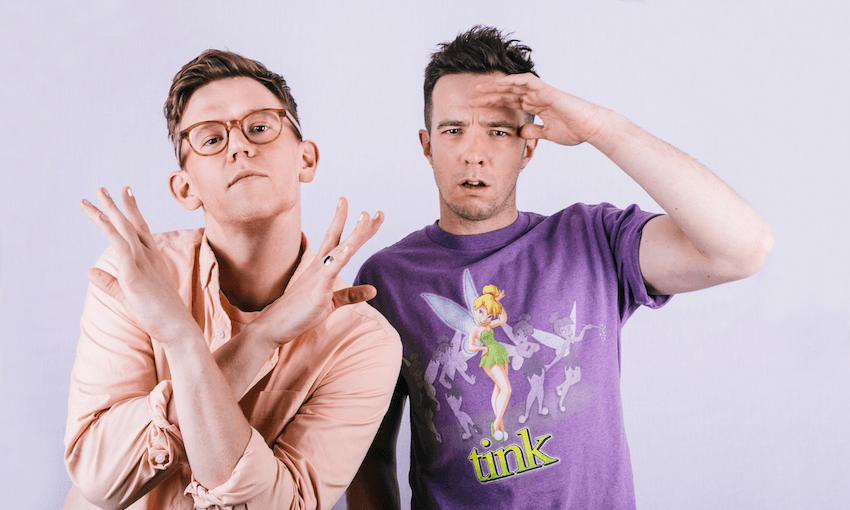 ‘We have a gay agenda we’ll never drop’: Chris Parker and Eli Matthewson on The Male Gayz

Chris Parker and Eli Matthewson’s hit podcast The Male Gayz is now a thing you can look at with your eyeballs, thanks to TVNZ on Demand.

Chris Parker and Eli Matthewson are two of the country’s most prolific and well-known young comedians. They’re both writers for Jono and Ben and Funny Girls, as well as occasional performers on both shows, while collecting plaudits and awards aplenty – Matthewson was nominated for the prestigious Fred Award in last year’s Comedy Festival for his show The Year of Magical F*cking  and Parker won that same award this year for his hit show Camp Binch.

Alongside all of this, they’ve got a hit podcast. Earlier this year, The Male Gayz received funding for a TVNZ web series which loosely follows the structure of the podcast. I sat down with the pair to talk about the show, what makes it different from the podcast and how they’re engaging their audience without pandering to them.

Sam Brooks: So what is the difference between the show and the podcast?

Eli Matthewson: I’d say at least half of each episode is us chatting in the studio.

So how did you plan out each episode?

Eli: Every one of the six episodes has a different theme and an arc which is maybe progressing – we end the season with an episode about the future. We made a list of themes, people we wanted to talk to, things we wanted to do and then collated those together.

Chris: I think a big challenge for us trying to work out what we wanted to do. Everyone wants to make a web series and apply for funding, and then when they give you the money you’re ike, “Now we actually seriously need to think about what we want to make. It’s a lot of our storytelling – our podcast – and our relationship, but filmed.

Eli: And even then the themes could very easily have gotten preachy or teachy, but we wanted to avoid that. The themes of each episode are just loosely the conversations we have, among other things, and we’ve got important and awesome people in like Louisa Wall, Mika Haka, Aych McArdle, who are all activists, but we didn’t necessarily delve into that super deep.

I think the show is more about positive role modelling by us having fun and talking about whatever. And we’ve had a really strong response to that – when we get messages from people, they’re not necessarily like, “Wow, you showed me how to live my life!” They just like hearing stories from people who are like them.

Eli: Every three months he’s like, “Yeah, where are the episodes?”

Chris: That stuff feels awesome. We just get to make what we wanted to make, and it felt really liberating to put your foot right down on the accelerator, cause often we drive our gay agenda cautiously through the fields of Jono and Ben and Funny Girls.

We got one sketch in on Funny Girls and we were so stoked. It was still fitting in with the kaupapa of Funny Girls which is channeling and showcasing women, but we also have a gay agenda which we’ll never drop.

So you guys both represents the same backgrounds as gay men. You’re both from Christchurch, you’re both white and performers and you both came out around the same time in life. So how do you acknowledge that specific kinda thing in the show? Is that important to acknowledge?

Chris: Totally that is something we were hyper aware of and that’s the whole point of having guests. We kinda can’t–

Chris: Our experiences are not everyone’s experience and in fact it’s often only part of the experience, so that’s the power of having guests in.

(to Eli) How else do you think we navigated that?

Eli: We just made sure we had lots of people with different identities. I think the fact that we had such similar upbringings is a benefit to our show because it means we are so reactionary to each other’s stories and we identify with each other so strongly.

Which is a really fun part of the show and the podcast, it’s really nice. In so many of these shows it’s two people from different backgrounds coming together. That you guys come from the same background, there’s an implicit and unspoken understanding there.  It’s quite a special relationship.

Chris: And so often you are the voice of difference in the room, right? Like when I did a line up show with myself, James Malcolm and Rhys Nicholson, and Rhys walked out and went, “Fuuuck, all the gay jokes have been mined”.

I’m like that’s so true, it’s so sad that we’re at the point where we’re just so used to being the only one on the bill.

The first two episodes of The Male Gayz are out now on TVNZ on Demand.