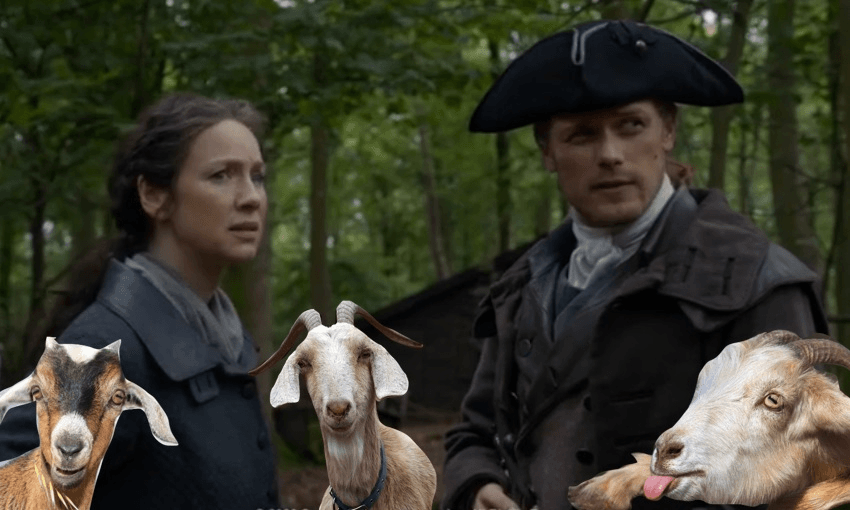 Something smelt strange in Outlander this week, and for once, it wasn’t Claire’s mouldy bread. Tara Ward recaps episode three of season five of Outlander.

Outlander would be nothing without goats. Without the goat in season one, Claire wouldn’t have been noticed by the Redcoat, taken to see Black Jack, and forced to marry Jamie. Without the goat lady in season three, Clarie wouldn’t have jumped off the ship and might have been separated from Jamie forever. Most importantly, without this week’s herd of feral goats shacked up in a tiny cabin in the North Carolina mountains, we would have missed Claire delivering the finest line my sweet ears have ever heard.

“That smell?” Claire declared as she walked through a putrid cloud of colonial stench, “It isn’t goat.”

It isn’t goat, Your Honour. IT ISN’T GOAT. Put it on a t-shirt, paint it on the Idiot Hut, tattoo it across Lord John’s furrowed brow, because the goats were the MVPs in an episode filled with crazy times. Crazy flowed like the pus from Mr Beardsley’s septic legs, like Claire saying “pig skin is a good substitute for human skin”, and Jamie claiming it was so cold he couldn’t find Little Colonel Fraser when he went to pee. And the mould! There was more mould than you could shake a crusty loaf of bread at, and yet, not a skerrick of penicillin to be seen. Just goats, just taking over the world, one Outlander episode at a time.

Family fun time at the Ridge was over, as Claire and Jamie hit the road to build a militia so big and testosteroney that it would put the shits right up the Regulators. Their plans were derailed when a thief in their camp was revealed to be the twin of Josiah Beardsley, he of the inflamed tonsils from episode one. The Beardsley brothers were bonded to a local man who mistreated them, which made Jamie mad. Nobody hurts the men he wants to send into battle. Nobody puts the Beardsleys in the corner on his watch.

Tell that to the goats. The goats roamed through the Beardsley cabin like they owned the place. At night, they probably ate at the table with tiny goat cutlery and and drank from tiny goat goblets and slept in tiny goat beds. While Fanny Beardsley tortured her sick husband upstairs, those goats carried on like it was Love Island and they were goaty bombshells, ready to shoot their shot and see if any other goats were their type on paper.

While most of us have the good sense to turn from disaster, the Frasers always run straight into the storm with arms wide open. Claire and Jamie were met at the Beardsleys by a horrific stench, a furious wife, and an old man rotting to death. Mr Beardsley was in a right state, having been immobilised by a stroke and now being slowly tortured by his fifth wife Fanny, who liked to burn his feet in revenge for the abuse he dished out to all his wives.

Look, if you think I’m talking about goats because nothing much happened in this episode, then you’re wrong. Stay with me, my little Outlander cherubs. Stick to me like you are mould and I am a chunk of crusty bread and together we are trapped under a bell jar of destiny. If you listen closely to the winds, you will hear the impatient cries of Outlander fans, screaming “BUT, FANNY” and “THE BEARDSLEY TWINS” and “WHAT ABOUT JAMIE GOING INTO THAT HOUSE WITH THE TERRIFYING GOATS?!?” Indeed. It all happened, and just like the lovely timelapse of bread going mouldy, I will never forget.

Fanny disappeared into the night, just like Claire’s dreams of inventing penicillin 157 years early. She left Claire holding both the baby and the goats, and Jamie holding the indenture papers. What to do about the evil Mr Beardsley? He blinked twice to tell Jamie to kill him, and the sound of the bullet sent millions of birds into to the sky and into our nightmares. Fly free, little birds, because as Fanny said, “you need more than love to survive in this world”. You also need goats, a lot of mould, and a time-travelling doctor with a hot potato husband to help you sort your filing system.

New episodes of Outlander arrive every Monday on Lightbox.