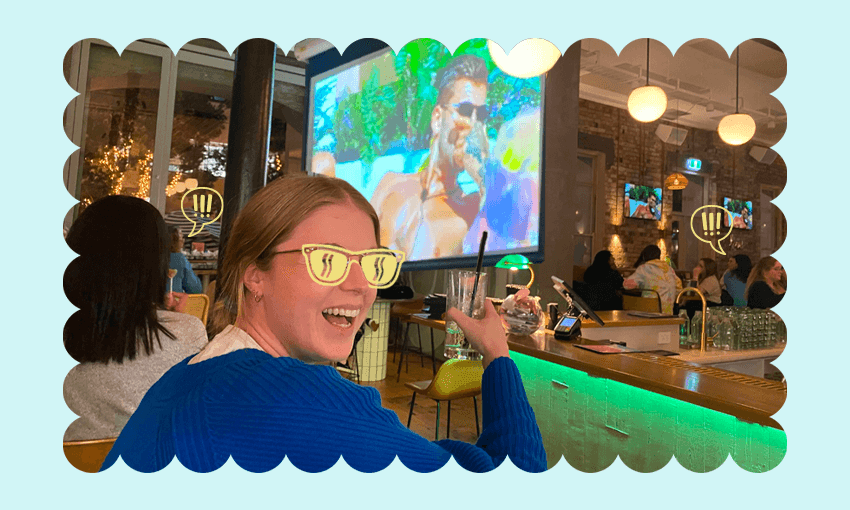 What’s it like to have all your wildest dreams come true? Alex Casey heads to a Britomart pub to find out.

They say be careful what you wish for, but nothing could have prepared me for this. It was just over a month ago that The Spinoff published my impassioned plea to watch Love Island at the pub. Last night I was just a girl, sitting in a Britomart tavern, staring down multiple screens emblazoned with Love Island’s glittering heart in sand, wondering what kind of monster she had created.

Luckily, if this season of Love Island has taught me anything, it’s how to turn any tricky situation into something joyful. If you accidentally lick a forbidden tit in Casa Amor, confess to it in such an absurd way that it becomes the defining moment of your existence. If someone hands you a screaming baby, simply chuck some lipstick and lashes on it and make it say “Heeeey boys”.

And if you campaign online for Love Island to be screened in pubs, you best turn up expecting not to be able to hear a damn thing over a crowd that is, to use a phrase, “absolutely buzzing”.

The event itself had it all – heart-shaped lollipops, “LOVE” spelled out in rose gold helium balloons, “Ti Amo” and “It is what it is”-themed cocktails and even a spot prize where people would “get a text” if they won a big thing of fake tan. Upon arrival, a YouTube video of the Love Island theme tune glowed from every single screen, and the pizzas and nachos were rolling out of the kitchen smoother than a freshly shaved bum cheek. All this before the episode had even started.

Thankfully two of the most memorable moments of this, the season’s penultimate episode, were subtitled anyway, so it didn’t matter that the buzzing crowd of honeybunz drowned out Dami’s mumbles completely. Paige’s mum whispering that she was “not buying” Adam Collard’s schtick elicited a huge gasp from the room. When Davide spoke with his mother and sister in Italian about Ekin-Su, reminding them both that “lei è un’attrice” (“she’s an actress”), the whole room of Davide die-hards cracked up knowingly.

There were other great moments where the whole pub reacted en masse to a simple detail. When Luca’s father walked out wearing plastic fish shoes, there was an actual scream. When Ekin-Su’s brother swaggered out, there was a shared sharp intake of breath at the surprise hotness. And when Luca decided to pack a sad for the seven millionth time about the voting, the whole room rolled their eyes at once. “Ugh, here we fucking go,” groaned a woman nearby, taking a swig of beer.

Look, I really don’t want to write a monocle-polishing thinkpiece about reclaiming space here, but there was something delightful about seeing a pub full of 98%* women publicly delighting in a private guilty pleasure. Halfway through the episode, two bombshell lads in their 20s walked in, both sporting slicked back hair, crisp hoodies under blazers, ready for a Big Tuesday. They immediately looked stunned by the screens and inquired at the bar about what tf was going on.

“That’s buzzy” blazer number one said. “We’re going to have to sit here and watch Love Island?!” blazer number two laughed. The bombshells left the villa as quickly as they arrived.

As the episode came to an end, another large group of men burst through the door. More bombshells. And just like Adam Collard himself, one of them had already been on our screens before. It was Steve from The Bachelorette, with a bunch of friends who all burst out laughing when I asked him where I recognised him from. Given that he was from the reality romance world, surely he would have wanted to watch Love Island at the pub?