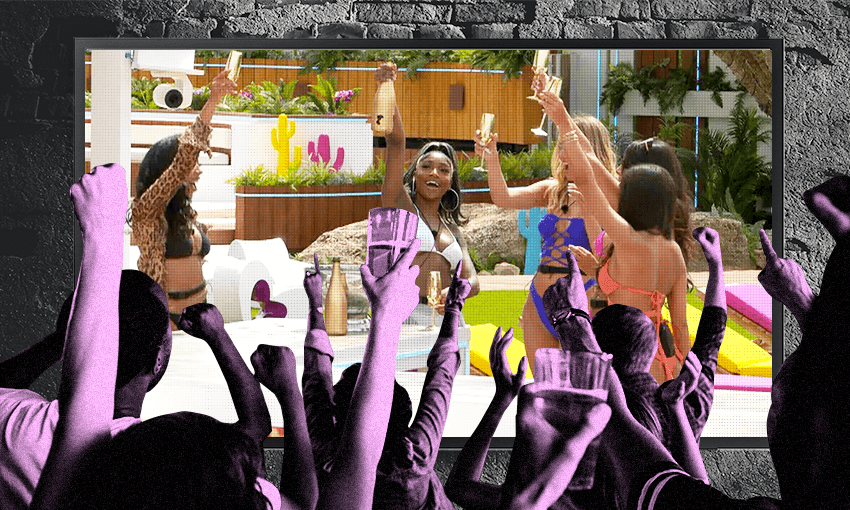 Please give us this one fun thing in a cruel, cruel world, begs Alex Casey.

Recently on Love Island, enraged Italian Stallion Davide told Ekin-Su what he really thought of her after she admitted to kissing Scottish Jay on the terrace. “You are a lierrrr!” he bellowed. “Actress!” he (accurately) observed. “Go the fuck out!” There was no question that this was the first instant classique moment of the series so far, and I couldn’t help but pine for how much better it would have been to experience with a huge group of enthusiastic Love Island fans, cheering and whooping and maybe even eating wedges with sour cream and cheese.

What I’m saying is, I want to watch Love Island at the pub in the same way that heaps of people get to watch sports at the pub. In a world where the monoculture is in smithereens and everything feels bad all the time, reality television reflects our values (for better or worse), allows us a sweet escape from our daily lives, and unites us all in a way that few things other than sport and being mad about the price of cheese can. Allow me to count just a few more of the parallels:

But where sport gets people shouting from the rooftops, reality television remains relegated behind closed doors, labelled a “guilty pleasure” and kept to private group chats and underground podcast universes. Nobody paints their face for the recoupling ceremony then spills out onto the footpath belting “LOVE ISLAND BAYYY-BEE”. Nobody books a table at the local brew bar for Casa Amor. Nobody starts some kind of caveman chant when a couple visits the hideaway. But… what if we did?

As a hobgoblin of the so-called media, I have attended my share of publicity events where reality television is played in big, weird, rowdy spaces. These have included a draughty indoor go-kart track decked out with OMGNess balloon installations (The Apprentice Aotearoa S1), a Grey Lynn mansion littered with rose petals and cupcakes (The Bachelor NZ S1) and a chilly Coronation Hall where Hollie Smith sung a song and they gave away a diamond ring (Married at First Sight NZ S1). Each and every time has felt electric, and not just because of the presence of Norrie Montgomery.

Because although these public viewings can be a bit noisy and harder to focus on the subtle whispers and asides on screen, what they provide is an unbeatable and essential shared experience. The laughter, the shock, the outrage. The live reactions and conversations with like-minded folks about how complicated reality television is, how bad it can make you feel about your appearance and how unrealistic so much of it is. Anyone who has watched Love Island with more than two people in a room knows what a godsend this is.

And don’t you think for a second that there isn’t enough enthusiasm to make this a profitable enterprise. People would happily don cut-out body-con dresses in droves to watch Love Island at the pub. People would spend upwards of $18 on a Cosmopolitan to watch Love Island at the pub. Love Island drops throughout the week, so you could still have sporty spice weekends. Think of the promotional opportunities! On the door you could get people to chuck their numbers in a hat and then throughout the night they could randomly yell “I GOT A TEXT” for free drinks, chippies etc!

I asked the Love Island overlords at Neon if this is allowed, and the idea was quickly mugged off: “We don’t hold the commercial transmission rights for Love Island, and screening in pubs or in public would fall into the commercial space,” a spokesperson said. One thing is for sure, though – Love Island at the pub is what the people want. Comedian Courtney Dawson posted an Instagram story last month, demanding that hip Auckland sports bar Schapiro’s airs the reality juggernaut. In a flash poll conducted in a private group for reality superfans, 63% said yes, they would go to the pub for Love Island and 21% said maybe. If that’s not a landslide, then Luca is not a fishmonger.

It’s not like we are asking for an endless supply of Quay sunglasses and a Pretty Little Thing collaboration or anything. All we want is Davide’s big handsome face – inexplicably wearing two pairs of glasses – projected onto a crappy fake brick wall. All we want is neon lights shaped like palm trees behind the bar. All we want is to rub shoulders with crack-up clientele who know exactly what it means to put in the hard graft, to give someone a cheeky manicure and to have a type on paper.

We are out there, and Love Island at the pub is what it would take to turn our heads.