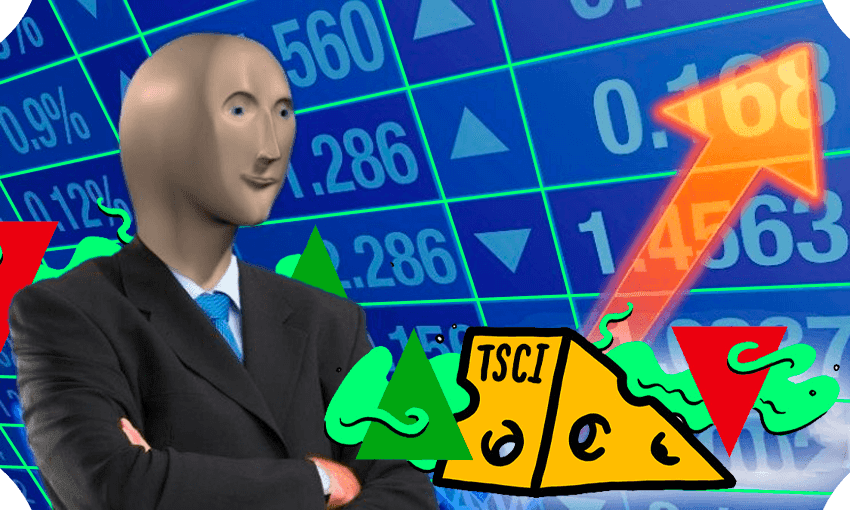 The price of cheese has come to represent the cost-of-living crisis. So we’re tracking it.

A block of cheese used to be pulled out in journalism only when discussing the weight of things, or more specifically, the weight of newborn babies. Cheese was just cheese, a staple item on every non-vegan’s shopping list and something you vaguely thought about but never discussed.

Two years ago, then National leader Judith Collins was roundly criticised for guessing that a 1kg block of cheese costs “$4 or $5”. It doesn’t. Even in 2020 it didn’t, though even I, a relatively young person, remember when it did.  In 2020, cheese topped out at around $17 per kilo. Hahahaha.

Now, the price of cheese is the canary in the coal mine of the cost-of-living crisis. As the cost of cheese rises, so does everything else. Here at The Spinoff, we pride ourselves on reporting “news you can use”, which is why we are launching the Spinoff Cheese Index (TSCI).

From today, the homepage of your friendly local website will feature a cheese tracker*, showing the price of various cheeses at any given moment. The tracker will be updated hourly, and the graph below will track price trends from June 1 (when the tracker began) until the day we deem The Spinoff Cheese Index no longer necessary.

The government this week announced moves to break up the supermarket duopoly that has had a hand in rising food prices, though changes aren’t expected to be implemented until later this year. Meanwhile, the price of a 1kg block of tasty cheese has hovered around the $20 mark for weeks now. Will it continue to rise? Will it fall? Is this all a futile game in the already futile game of life? Keep an eye on The Spinoff Cheese Index to find out.

*The Spinoff Cheese Index (TSCI) tracks the price of specific 1kg blocks of cheese at The Spinoff’s local supermarket. Prices are kindly provided by grocer.nz and we can’t guarantee their accuracy, nor the likelihood of this whole ridiculous experiment continuing to work in the future.