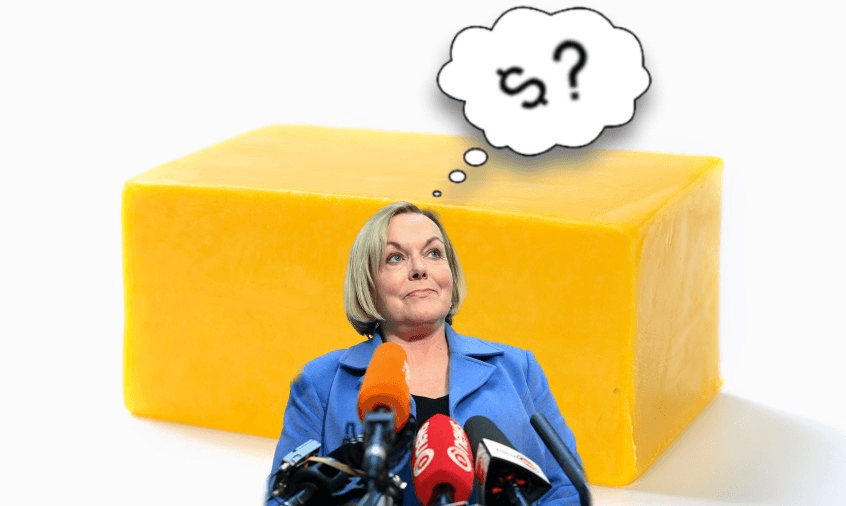 Emily Writes: If you don’t know the price of cheese, you’re not fit to run the country

The leader of the National Party, Judith Collins, doesn’t know how much cheese costs.

Yesterday, the nation stopped when one of the hosts of The Project, Josh Thomson, asked Judith Collins how much a 1kg block of cheese cost.

Tasty cheese? Where does she live? France?!

It made me wonder about whether our cheese-buying habits were an indicator of class. I mean, aside from having a home you own or rent. (The 2018 Census results showed there are 318,891 damp homes. Compared with homes that were owned or held in a family trust by the household, the homes of renters were about seven times more likely to be always damp.)

And like, aside from having a house at all (at least 16,000 households are waiting on emergency public housing, according to the latest figures). And aside from, like, being able to eat anything (research from 2017 found that just over 3% of New Zealand children under 15 years lived in households experiencing severe food insecurity, and almost 11% lived in households experiencing either severe or moderate food insecurity).

Oh and also, aside from education access and equality (Unicef ranks New Zealand 33 out of 38 for inequality in the classroom). And also, like, other than the severe wealth inequality in New Zealand that sees two white men owning the same amount as the poorest 30% of the adult population, according to Oxfam.

And access to healthcare is probably another indicator, given Māori have demonstrably poorer health outcomes than other New Zealanders and are more likely to suffer heart disease, diabetes, and lung cancer. Like other than that, cheese is totally the indicator, right?

There’s a cheese hierarchy in every household. In ours it goes a bit like this (from bottom to top):

Blue cheese is very fancy because some people won’t eat it so it might go to waste if you put it out as guest cheese. When we have blue cheese we’re being very fancy.

That Judith Collins doesn’t have to ever consider what cheese is fancy or not, and possibly even throws out cheese when it hasn’t been eaten, in my opinion, speaks to whether she can properly lead the country. I propose that every politician should have to do a weekly shop with one average New Zealand family at Pak ‘n Save. They will learn how to choose canned foods that last longer than fresh veg. They’ll learn you should always try to buy canned veges without salt if you can’t afford fresh veges that week because you’ll get more nutrients.

They’ll learn to shop at Reduced to Clear for cheap meals past their best-before. They’ll learn dried beans are cheaper and you only have to soak them overnight. They’ll learn to predict when $1 week will be so you can save up for that and go with less before it, and that during Meat Week, you need to find more money to freeze meat for the weeks when it’ll be more expensive.

They’ll learn to love mince and that split peas and lentils fill you up for cheap. They’ll learn you can freeze almost anything, even milk, and that milk powder and water is cheaper when the cost of milk is too much. And they’ll learn that if you can do all these things you’re lucky compared to those who can’t even afford what you can.

They’ll learn that for many families in New Zealand, you don’t get cheese at all. And for a treat, you might get colby. And it doesn’t cost $4 or $5 – it costs something else in your trolley that you have to remove.

They might learn that when you have a bit extra, you give it to those who can’t afford lentils, let alone cheese, because in June 2020 compared with May 2020, fruit and vegetable prices rose 3.9% (up 0.8% after seasonal adjustment), and meat, poultry, and fish prices rose 0.9%. Food prices increased by 4.1% in the year ended June 2020.

Does it matter that our possible next future prime minister doesn’t need to ever consider the price of cheese? Maybe it does, if that’s just one step in understanding what life is like for so many of the people she wants to lead. Judith Collins is, and has always been, a have. Maybe she should spend some time with the have-nots to work out what the real world is like. And she should bring some of her cheese.