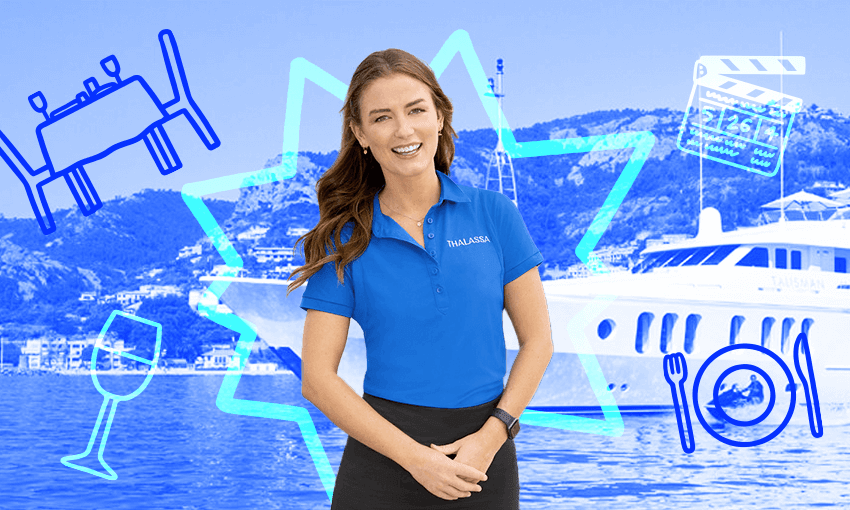 Below Deck fan favourite Aesha Scott tells Alex Casey about the scene that still gives her shivers, and stepping up to perform ‘literally the most stressful job ever’ in new series Below Deck Down Under.

There’s a moment in Below Deck Mediterranean season four that made New Zealander Aesha Scott realise the true power of a silly reality show set on a luxury yacht at sea. During a drunken night out on land with the crew, her love interest at the time, Jack, makes a joke about her expression. “Why is your face, looks like you’ve just been raped,” he slurs. “Don’t make jokes about that,” Aesha says firmly, pushing his arms off her. “I have actually been before, so it’s not funny.”

It’s a breathtaking exchange that, to his credit, leads to a lot of emotional reflection from Jack, who candidly tells the camera in his interview the next day about how much he regrets his joke. “To go through that shit and then I’m like a fucking dickhead making a joke about it,” he says, eyes red and nose raw from crying all morning. “I can’t think about anything else.”

That episode of Below Deck Mediterranean first aired in 2020, but Scott says its impact still gives her “shivers”. To this day, she gets messages from survivors all over the world, applauding her for speaking up. “They say watching me saying that was the first time they’ve been able to tell their partner or their family about it,” she says over Zoom. “I never knew that I would be able to have that much power to let other women not feel ashamed about it.”

It’s hardly the kind of outcome you would expect from a reality series that follows drunk goons on a luxury super yacht, but anyone who knows the franchise knows that Below Deck is full of surprises. The series is the perfect amalgamation of what makes so many other reality shows great – the pressure-cooker kitchen of Masterchef, the romantic trysts of Love Island, the nouveau riche of The Real Housewives and the workplace dramas of Undercover Boss.

All set in the middle of the sea, all at the total mercy of mother nature.

“I’ve worked in yachting for almost eight years now, and before I even knew that this show was a thing, I always said ‘we need to record this, because this is all insane’,” Scott laughs. None of the drama on the show is manufactured, she says. “Every single boat you work on, no matter what, there is this much drama. That’s just what happens when the pressure is so high and there is so much sleep deprivation, throw that together with 16 or 17-hour days and things just blow up.”

Despite working in tiny cramped crew quarters, Scott says the cameras barely register when the crew is in the throes of a charter. “They are honestly like ninjas,” she says, explaining that crew are instructed to act as if the cameras aren’t there, which means they can’t slow down or change anything to accommodate them. “They are literally jumping up over things, walking backwards, all this stuff to capture you while staying out of your way – it’s really impressive.”

The only time the cameras do start to grate is when situations in the interior – her domain as chief steward – get stressful. “I’ll be trying to problem-solve a specific thing and they’re just right there in your face,” she says. From managing her team to juggling guest demands and liaising with the perpetually-fiery chef, Scott says her role is “literally the most stressful job ever.” Her secret? “Keep moving your limbs, just do one thing at a time,” she laughs. “If I stuff up badly at least it will make good TV, right?”

And Scott definitely makes good TV. After two seasons of Below Deck Mediterranean as a second stew and now stepping up to the chief stew role for Below Deck Down Under, the Tauranga local has become a beloved character for her terrific people skills and complete lack of filter when it comes to sharing outrageous stories from her personal life. Whether it is describing her first interaction with poo, or the assertion that she would “rather watch Gilmore Girls than suck a dick”, she has fast become a fan favourite since first appearing on the show in 2020.

She admits her style of humour is unusual, especially for a New Zealander. “It’s interesting, Kiwis are actually way more conservative than you realise they are,” she says. “There are so many parts of human life that everyone does, but for some reason we all think it’s so taboo to talk about.” Although she is the darling of shocking moment YouTube compilations, she’s not in it for shock value. “I wouldn’t throw out a super outrageous comment unless I knew it was going to be taken well,” she laughs. “I think you’ve really got to know how to read your audience.”

On that note, our 15 minutes are up and there’s only time for one more question. I take a punt and read the room – does she still stand by her comments about Gilmore Girls? “Well, now that I’ve got my boyfriend’s penis, not so much,” she laughs.

“But afterwards I would still like to watch Gilmore Girls.”

Jump on board for weekly Below Deck Down Under recaps – follow The Real Pod on Apple Podcasts, Spotify or your favourite podcast provider.