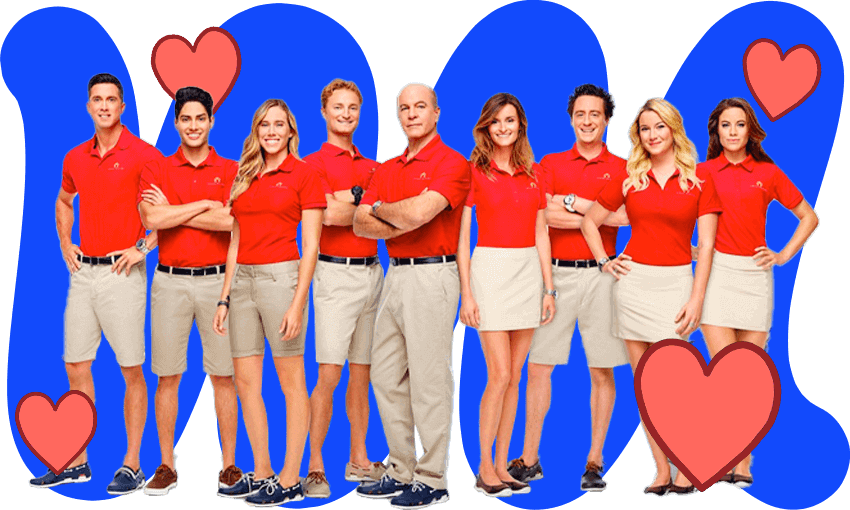 Below Deck: Mediterranean is the best reality show on the seven seas

While we wait for the local reality machine to kick in into gear in 2022, Alex Casey makes an impassioned plea that you all watch Below Deck: Mediterranean.

After watching Below Deck: Mediterranean in its entirety, I became a different person. I walked around the house demanding in a shonky South African accent that the chief stew (my partner) commences dinner service (kibbles) for the primary guest (the cat). The car became the tender, the kitchen became the galley, and I considered buying a red polo shirt and a black skort not once, not twice, but three times. I became a Below Deck Med Head and I’m bloody proud of it.

Now, as we twiddle our thumbs and wait for the likes of Celebrity Treasure Island, Drag Race Down Under, Mystery Love Island Adjacent show and all the other reality delights we’ve been promised to arrive on our screens this year, I implore you to get onboard with Below Deck: Mediterranean. Following the exhausted, cranky crew who work on horrible super yacht charters for the filthy rich, it is the perfect rat king of reality television elements that delivers something for absolutely everyone.

Because nobody asked and I’m sick of writing this out on toilet walls, here is my thesis.

Below Deck: Mediterranean is Love Island

Romance is a Below Deck cornerstone, as each season the brand new crew members from around the world couple up, couple swap and uncouple at a rate of knots that would make Captain Sandy haul anchor. Whether it is Hannah “getting a text” on the giant communal iPad from a flirtatious guest in season two, or the love triangle of Malia, Wes and Adam on the very same charter, fans of Love Island will froth Below Deck: Mediterranean harder than the jacuzzi jets on a crew day off.

Below Deck: Mediterranean is Too Hot To Handle

In Too Hot To Handle, a sentient yet prudish air freshener punishes hotties for hooking up by taking money off them. In Below Deck, the same tension exists without any of the ridiculously contrived dystopian premise. The more that the crew pash, the more distracted they are at work, and the less money they get in their tip envelope at the end of the charter. No air freshener required.

Below Deck: Mediterranean is Masterchef

If you like kitchen nightmares and succulent seafaring meals, Below Deck: Mediterranean has that too. Every season a single chef with weird tattoos and a death wish gets thrown into the purest of hells, faced with supply issues, demanding guests who want a bowl of white gumballs in the middle of the sea, crappy kitchens, endless dietary restrictions and, in the case of Mila in season five, only a recipe for oven tray nachos in their arsenal.

Below Deck: Mediterranean is The Masked Singer

Whether it is Roy Orbison (Jr), baseball legend Johnny Damon, or Mr Skin, who I genuinely thought was made up for a gag in Knocked Up, the D-list celebrity guests that brave the Below Deck: Mediterranean gangway will have you humming “who is it, who is it, who is it underneath the mast”.

Below Deck: Mediterranean is The Apprentice

If you watch it in chronological order, Below Deck: Mediterranean follows the journey of certain crew members as they forcefully ascend through the strict boat hierarchy, gaining new positions and stripes on their epaulettes in a system that is not dissimilar to shows like The Apprentice and Undercover Boss. Every episode is packed with what is essentially employment drama – who will Hannah appoint as second stew? Which deckhand will Captain Sandy let drive the boat out of the port? And who will hear “you’re fired” over a weed pen in a handbag? I’ll never tell.

Below Deck: Mediterranean is Piha Rescue

What’s cool about being rich as hell in international waters is that, even if you are ratarse drunk, the only thing standing between you and your jet ski dreams is a wee man named Colin in a red polo shirt. The amount of treacherous rescues on Below Deck: Mediterranean rivals the most dramatic moments in Piha Rescue, whether it is drunk deckhands slipping off the lazarette or guests having heart murmurs on an inflatable banana. BYO life jacket.

Below Deck is The Real Housewives of Everywhere

The dinner service on Below Deck: Mediterranean is a show within a show, as the audience takes the side of the bemused, exhausted interior crew watching rich idiots slur nonsense at each other from behind crappy Look Sharp Venetian masks. And when they really get into it (it being the wine), the drama rivals any good Real Housewives food fight.

Below Deck is Man vs Wild

And while all of this drama is happening onboard, it is easy to forget that they are all in the middle of the fucking Mediterranean sea, which any seafarer will tell you is some of the most tumultuous water in all of the… sea. In a matter of minutes, the weather can change from sun-soaked bliss to black clouds and lightening bolts. It is rare that a charter goes by without nearby boats sinking, jellyfish stinging up a storm or anchors getting tangled overnight like necklaces in the bottom of a jewellery box. Outdoors with Geoff could never.

Below Deck Mediterranean is available to watch here on Netflix