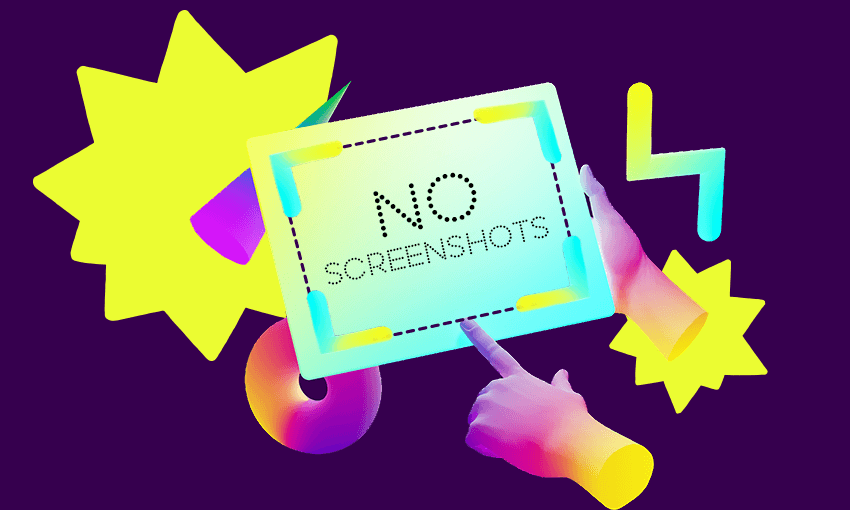 Wanna screenshot? Not a chance, not any more. (Image: Archi Banal)

Let me screenshot your shows, cowards

Wanna screenshot? Not a chance, not any more. (Image: Archi Banal)
Opinion

Both ThreeNow and TVNZ on Demand no longer let users screenshot images from their programmes. Sam Brooks, for one, is raging.

A few weeks ago I was watching Dancing with the Stars, as I am obligated to do, and I saw a dear friend appear on the screen. As one does whenever you see something unusual while watching video on your laptop or phone, I screenshotted it multiple times so I could send them to her, in order to inform her that she was on TV, as if her being on the set of a television show hadn’t already made her aware of this possibility.

When I went to look at the screenshots later on – when I tell you that I was shocked, I was appalled, I was enraged, I’m not even scraping the tip of the iceberg. Rather than various unflattering images of a dear friend, what I saw were black screens. ThreeNow had disabled the ability to take screenshots.

It’s not the first platform to do this, of course. Netflix has disabled screenshots on phones and other apps for some time now. Even TVNZ on Demand doesn’t allow them, a shocking development for those strange people who want to screenshot Shortland Street or the 6pm news (some colleagues have found this to be browser-dependent, so your mileage may vary).

I am not exaggerating when I say this is a catastrophic hit to my ability to communicate with my loved ones. More crucially for these services, it’s also a dumb business decision.

I am a big screenshotter. As of this writing, I have 2419 screenshots on my laptop, which I’ve had for just under two years. It’s a core part of my communication style. Screenshots are a quick way to send information, be it a joke, a “did you see this tweet” or even something remotely useful.

Screenshots are a language in their own right now. I can send a screenshot of say, Nicole Kidman’s Virginia Woolf walking into the river at the start of The Hours to any of my friends and they understand immediately what I’m feeling in that moment: just a little aggrieved. They’re a core part of the growing memefication of culture – which is not necessarily a bad thing.

At their best, memes are a language unto themselves. A picture of a drag queen sitting alone in a bar, a startled Pikachu or a crow holding a knife means something specific to a certain community, and absolutely nothing to another. At their worst, memes flatten out art (see how fast Marriage Story became a collection of memes) or allows dangerous ideas to be communicated quickly, with little resistance (see: parliament grounds, February 2022).

I understand why streaming services want to restrict users from screenshotting their content. They have intellectual property rights to deal with, and personally I can’t say I would unequivocally love it if content I’d poured my heart and soul into was sent across the internet, context-free, existing in perpetuity outside of my control or my ability to make an income from that content.

But I still don’t understand the business reason for it.

Memes are a way for a product or a piece of art to live on, to have another life. I don’t exaggerate when I say that by stopping screenshots, you’re stopping culture. Do you think Chris Warner’s iconic penis-line would have travelled so far had one savvy viewer not clipped it? Hell, if you trawl back to this very site’s early TV coverage, you’ll find more screenshots than official, sanctioned, photos. And look how far we’ve come!

the nancy / robin moment i've been waiting for on STRANGER THINGS pic.twitter.com/YP07kp0E97

There’s a very good reason why Netflix’s social content is essentially screenshotting and reproducing its own content. Or look at its hit web series I Like To Watch, in which drag queens Trixie Mattel and Katya watch Netflix content and riff on it. Aside from being hilarious in its own right, I Like To Watch is essentially  corporate-endorsed memefication.

But corporate memes can only go so far. Culture tends to move at its own pace, though increasingly assisted by social media algorithms with a mind of their own. Screenshots are the simplest, cheapest and most user-friendly way to accelerate that process. With a few button presses, a moment from a show can go viral, getting more eyes on it than it would have otherwise.

Sure, it might open that show up for more ridicule, but a click is a watch. Streaming services don’t know if you’re watching something ironically. Just that you’re watching at all.

So be brave, [insert name of streaming service here]. Let us screenshot. It’s for your own good (and also mine, personally, please and thank you).