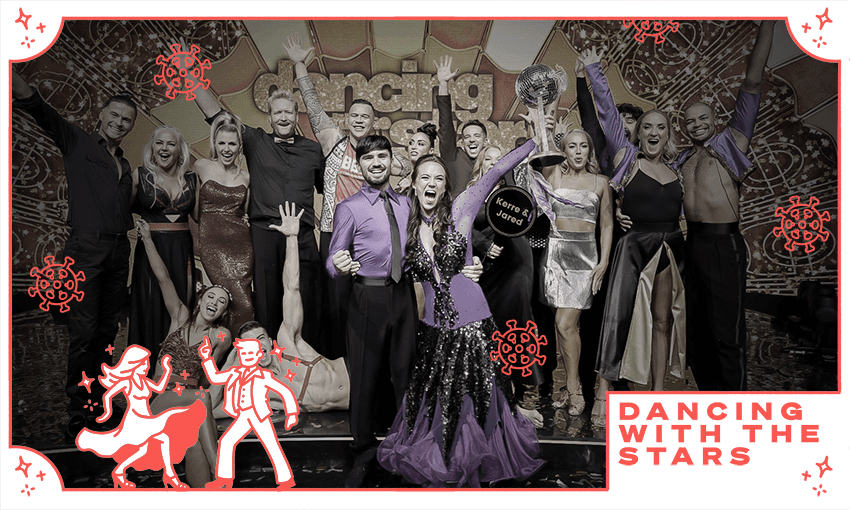 Should Dancing with the Stars have happened at all?

After six weeks and more than a few tussles with Covid-19, the show limped to the finish line last night. Sam Brooks wonders if it was worth it.

The finale of this season of Dancing with the Stars opened with a triumphant group number to Nicki Minaj’s legendarily hectic ‘Starships’. For roughly 90 seconds, we were wowed by the smiling faces and bedazzled bodies of the stars and professionals we’d been watching for the past six weeks. For those 90 seconds, you could pretend to forget all the bumps in the road that got us here.

There was the shock elimination of Sonia Gray, followed by the even more shocking elimination of Eli Matthewson. Oh, and then Eric Murray and Rhys Mathewson were forced to withdraw from the competition due to Covid-19 at the semi-final stage. Two dancers, Kerre Woodham and Alex Vaz, valiantly returned to the competition despite a lack of rehearsal time. Hell, only a few hours prior to the finale, it was announced that head judge Camilla Sacre-Dallerup wouldn’t even be there, because she too had contracted Covid-19.

Despite it ending with a very worthy winner in Jazz Thornton, this was an indisputably rough season of Dancing with the Stars. The show is meant to be a pleasant escape, with generally likeable celebrities triumphing against adversity (or choreography) to earn money for charity. There’s little drama and no fighting, and while there might be some tears, they’re mostly shed in happiness. It’s a feel-good vibe that the audience can’t help but pick up on.

At least, most of the time.

For me, this season of Dancing with the Stars was a reminder that we are still very much in a pandemic. Since the season started, there have been 260,869 cases of Covid-19 in New Zealand; the show’s on-screen talent represented only five of them. There have been 466 deaths from Covid-19, with our total death toll reaching 1000 during the season’s run.

You can’t talk about this season of Dancing with the Stars without talking about Covid-19. The fact that this season existed, in the truncated way that it did, is likely because it had already been cancelled twice due to the pandemic. Not just that, but Covid-19 fundamentally changed the shape of the finale, from the contestants to the judges. Even attending the show required an oddly Children of Men-esque trip through testing tents.

Which raises the question: why on earth would a network choose to do a show that might as well have been scientifically designed to be taken down by Covid?

Dancing with the Stars is potentially the reality show most susceptible to a significant Covid-19 disruption. Not only is it broadcast live, but the entire cast is made up of people who can’t be properly replaced – either because they’re a star, or they’re a professional dancer – and it works to a tight schedule. The network can’t simply push pause on the series and postpone. There are the schedules of the stars, the crew, the presenters, and hell, even the ad slots to negotiate. It’s a logistical nightmare.

In that way, the series is closer to a long-running theatre show. Except there are no understudies, no Creative NZ funding, and they can’t just wrap it up mid-season and try again in a few months if things go south. It films live, come rain or come Covid.

I’m not saying that Dancing with the Stars shouldn’t have happened. People’s livelihoods rely on this show, and I’ve no doubt the cash injection is a much-needed boon for the charities for whom the stars danced. I have no idea what went down behind the scenes to adapt the show to fit our pandemic reality, and whether the steps they took were sufficient enough (although I’d argue the resulting season proved that… they weren’t).

I come to this from a place of empathy: I work in live theatre, an industry that is slowly, surely, lifting its foot off the brake after a two year standstill. But our industry is adapting. We’re finally learning the cost value of understudies. People mask up inside theatres, and socially distance if possible. Even though the industry has widely dropped vaccine passes, there are still those that soldier on. While there are ways to mitigate the risk of Covid, we know that any kind of live event is never going to be 100% risk-free. And that sometimes you just get really, really unlucky.

Reality TV works like a funhouse mirror to the world we live in. While it can often be pure escapism, it also shows us the ugly sides of society we might not otherwise be forced to engage with, writ larger or more obvious. I’m thinking of Julia Sloane’s racial slur, Dom Harvey’s idiotic comment about Chrystal Chenery, even Scarlet Adams’ blackface incident. When you put these difficult conversations into popcorn entertainment, the audience sits up and takes notice.

Usually when Dancing with the Stars raises a mirror to society, it’s through the lens of charity, shining light on causes we might not otherwise be aware of. Unfortunately, in a bleak way that is very unlike the show in general, this season was a reminder that we, as a nation, have largely moved on from this pandemic. Sure, we still get the 1pm updates, we still see people wearing masks everywhere (hopefully), and it’s understood that our loved ones might drop off the face of the planet for seven days at a time.

But it’s all understood as a part of our normal life now. The show must go on, even though some people have to drop out due to entirely foreseen circumstances.

This season of Dancing with the Stars wasn’t really evidence that we’ve moved on. Instead, it showed how hard we’re trying to go back. But let’s be real: there is no going back to the era of a smiling Samantha Hayes being lifted in her triumphant last dance, or a teary-eyed Manu Vatuvei dancing with a rugby ball, without a single thought of masks, RATs or isolation requirements.

No, we’re in the era of people dancing to Nicki Minaj’s ‘Starships’, willing us to forget the reality of life in 2022, if only for a brief moment. I’ll leave the last word to the poet laureate herself:

“I’m on the floor, floor

I love to dance

So give me more, more

‘Til I can’t stand

Get on the floor, floor

If you want more, more

Then here I am”