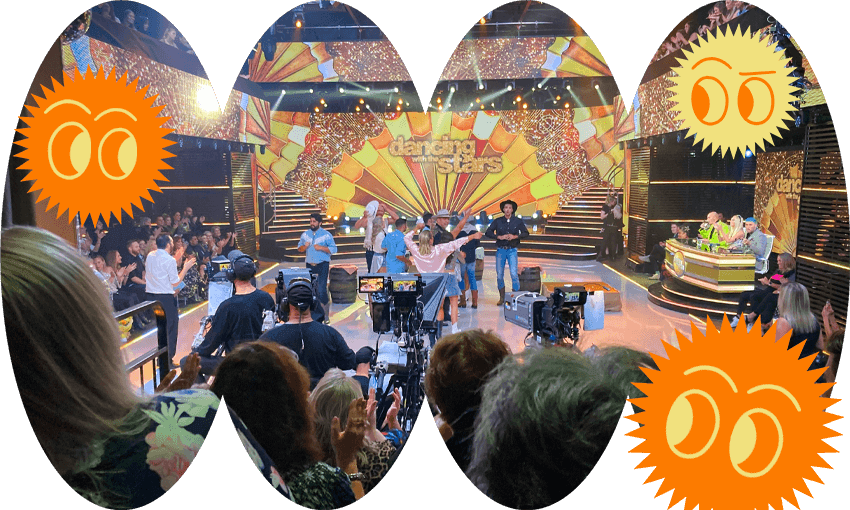 The Spinoff goes behind the scenes at New Zealand’s favourite reality show: Dancing with the Stars. (Image Design: Tina Tiller)

The Spinoff goes behind the scenes at New Zealand’s favourite reality show: Dancing with the Stars. (Image Design: Tina Tiller)

What’s it like to watch New Zealand’s favourite reality show live and in the flesh? Sam Brooks and Alex Casey share some behind-the-scenes tidbits.

Dancing With the Stars NZ is the biggest party on television at the moment. Everybody’ invited – but only a select few can attend in person. The glittering combo of family, friends and fans that gathers outside the Epsom studio more than two hours before the show begins gets to see some things they never show us on the box. Over two consecutive weeks, The Spinoff’s media moles Alex Casey and Sam Brooks snuck in (aka were cordially invited) to bring you these earth-shatteringly exclusive tidbits.

The RAT tent is a reality show in itself

Before the show, you have to sign a health waiver thing and line up for ages to get your RAT in an ominous looking tent. People in high vis give you a number, hand you a swab and watch you stuff it up your schnoz and give it the old five swirls. Then you’re transferred to a holding pen, were everyone perches on foldy chairs in their sequinned Sunday best and waits for their number to be called. It’s a thrilling mix of celebrities supporting other celebrities (Brodie Kane’s mum), partners of dancers swapping war stories, and punters wearing TEAM BRAZZ T-shirts. Don’t hear your number called out? May the odds be ever in your favour. / Alex Casey

You get to watch yourself

I’m sure I’m not revealing any secrets when I say that the dance at the very start of the show – high production values, many dancers, lots of lights – is pre-recorded about an hour before the actual show to allow the editors to quickly cut it into something a bit less hectic than it appears in real life. What I am probably revealing, however, is that the live audience gets the chance to watch the entire thing again, as they play the televised clip on the big screen before the actual show. It’s quite a surreal feeling to watch a performance you just saw in person, chopped up and edited, on a massive screen in the very same space that you watched it in real life. Lynchian? Absolutely not. Weird? Sure! / Sam Brooks

Lance Savali is the people’s prince

The first piece of evidence came before the show even started, when production filled James and Camilla’s glasses with posho sparkling San Pellegrino, and Lance’s with a humble Kiwi Blue. Then: the judges came out to rapturous applause and Lance was grinning and chewing gum. A while later, when we got close to go-time, the chewing subsided. Gum swallowed? Almost certainly. Finally, around halfway through the show, Lance pulled out an impossibly small mint green USB fan in the ad break to keep himself cool. Still waters run deep, gum swallowers need representation too, and using a tiny fan gets you big fans around here. / AC

Tans, tans, tans across the board

Nothing could prepare me for just how tanned and sparkly the stars, hosts, dancers and judges were in the flesh. When Camilla walked out, my eyes retracted into my head like a snail. Her dress was covered in diamantes, her skin was luminous and her headband twinkled like the night sky. James was in a highlighter-yellow blazer and Lance’s aqua hair and impossibly white teeth were so bright that the audience really needed those special solar eclipse glasses to look at them directly. And the spray tans! Oh, the spray tans. I have many questions about the state of the bedsheets at The Quest and the toilet seats at the DWTS studio. / AC

The best bit about a live taping is not seeing the actual show – I can do that in the comfort of my own home, wine glass in hand, scented candle lit, slippers on. It’s seeing all the parts come together, largely thanks to the black-clad production staff rushing around during commercial breaks. My personal highlight of the DWTS set was floor manager Sarah brusquely ushering that night’s warm-up guy, Brendon Green, on and off stage, cheerfully wrangling a Harley Davidson off the set, and making it seem like putting on a whole damn live TV show is the easiest thing in the world. Which for her, it probably is! She does it twice a week, at least. / SB

The dancers psych each other up before each dance

Because Dancing with the Stars has yet to figure out how to break the laws of time and space, the dancers do not simply teleport onstage. Instead, they walk on and find their first positions, and generally have up to a full minute in front of the audience waiting for their clip to end and and the the music to start. During this time, they might hug, look each other in the eye, or if you’re Brodie Kane, wave at friends and family. It’s a lovely reminder that although the performance itself is what matters most, it takes a lot of work to get there. / SB

Something you don’t notice when you’re watching from home is that the dancers are making eyes at the judges any chance they get. It tends to be the professionals more than the stars who do it, but whenever a pair sweeps past the judging panel you can be sure that they’re making some fierce, focused “10s across the board” eyes. It’s pretty electric, and would be hard to capture on camera unless there was one literally behind the judges, so this one is a live audience-only special! / SB

A bit of gossip from warm-up guy Sam Smith: above the judges table is an eagle-eye camera that peeps the scores from their paddles seconds before they show them to the wider room. This presumably gives the graphics folks time to plug in the numbers in the back room, and send them down the content chunnel straight to our eyeballs at home. The more you know! / AC

… and a secret paddle box

I don’t know what I was expecting, but there’s something delightfully mundane about seeing the judges quietly rummage behind the desks to find the paddle corresponding to whatever score they’re planning to hold up. Judges? They’re just like us, humans with black wooden paddles underneath our desks. / SB

Sharyn Casey does everything backwards and in heels

Pour out your Kiwi Blue for Sharyn and Clint but especially Sharyn, who pulls off multiple incredible feats over the course of a live broadcast, all in heels. Up the stairs, down the stairs, across the floor, back to the booth! But the Michael Hill move of the night comes at the end of the episode, when she reads out the final scores for the evening. Readers, while you hear her voice run through the leaderboard, Sharyn is walking BACKWARDS in HEELS from her booth to her spot in the middle of the dancefloor while reading from a cue card. It’s a 10 from me. / AC

Dancing with the Stars airs on Sunday and Monday nights on Three at 7:30pm and 7pm respectively.