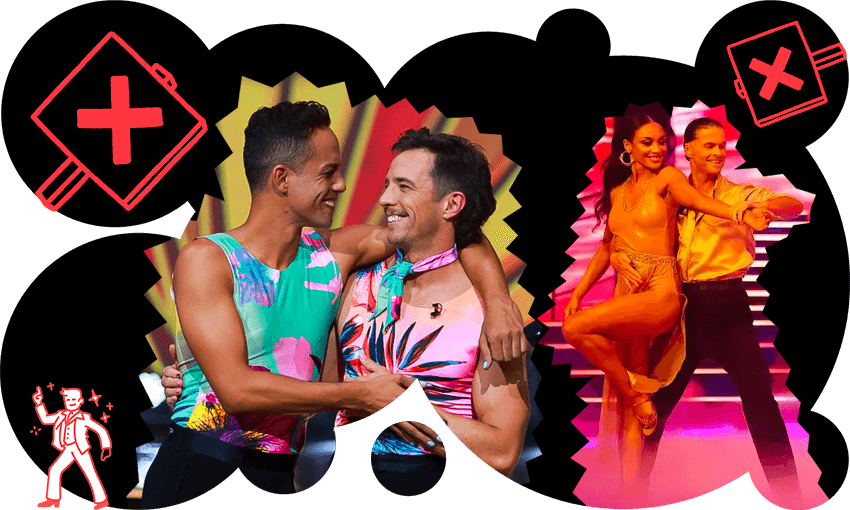 Dancing with the Stars is broken

Last night’s Dancing with the Stars elimination was a shocking one. Comedian and radio host Eli Matthewson, who had come out of the first week as a frontrunner, was sent home after a perfectly good jive that saw him at the top end of the leaderboard. Third, in fact.

It left a sour taste in the mouth. Even more sour given that it came one week after Lotto host and perpetual ray of sunshine Sonia Gray was sent home after a similar placement on the leaderboard. I had personally picked both to go straight to the top three, based on dancing ability and general likability.

Both eliminations seemed shocking not just to the audience, but to the hosts. You could feel the panic in the usually calm and collected Sharyn Casey’s eyes as she pleaded with us that if we wanted to see our favourite celebrity dancer next week, we had to vote. Because if we didn’t, then we might see two of the better dancers going home before they’d even really warmed up.

I don’t blame the public, though. I blame the show.

If you’re not aware of how the voting structure works on Dancing with the Stars, it’s pretty simple. The three judges give a score out of 10 for each dance, meaning there’s a maximum of 30 points available. The public then votes, and the final result is determined by a 50/50 split of both.

That means that a bad dancer can be saved by public vote because people really want to see them kept in the competition (see: Seymour, David). On the flip side, it can also mean that a great dancer, or a beloved celebrity, can be damned by a lack of public interest (see: above).

It’s not inherently broken. This is one of the risks of doing a reality show live rather than a pre-taped production. In the latter, a team can carefully edit around a winner so everybody’s happy in the end, but it’s not working this year. I’d argue that if Celebrity Treasure Island was put up to a public vote, it might not have had the same (joyous, correct) ending.

If two great dancers – who are beloved stars in their own right – go home in your first two weeks out of six, check your beakers because your formula’s out of whack.

There are countless factors as to why one star gets a bunch of votes and others don’t that have nothing to do with dancing. A particularly vocal or active fanbase (Jazz Thornton having 1.8m followers on TikTok, for example) can change things. A general presence in people’s lives can also help; there’s a reason why radio hosts, celebrity chefs and sports people tend to do especially well in these shows, because people have very specific, parasocial relationships with those figures.

The big difference this season is the group dance. On the second night of the week (DWTS airs on Sunday and Monday nights), the contestants split into two teams to do the opposite style of dance to the one they performed that week (ballroom or Latin) and are judged accordingly, with the score being added to whatever they got for their individual dance.

Last week, they were scored individually in the group dance. This week, the groups were scored as a whole, with one group getting 7/10 and the other getting 8/10. In theory, that makes sense – it’s a chance for someone who fluffed in their individual dance to make up for it.

In practice, it doesn’t work. Last night was the perfect example. It just added an arbitrary amount to the leaderboard, and didn’t meaningfully change anybody’s placing. Matthewson was still third, and went home. It’s a bizarre format shift, and seems there only to pad out the Monday night’s hour.

This needn’t be the case. In the 2019 season, the judges were often given the chance to save a couple. The two lowest-scoring couples (combining the judges’ and viewers’ votes) would repeat their dance from that week, with the judges voting to save one of the pairs. While many of those saving votes went to sixth-place finisher K’Lee, they also ended up saving the eventual top two – Laura Daniel and Manu Vatuvei. It’s a clever, and I’d say necessary, safeguard. It’s the competitive reality show equivalent of lightly tapping a dog on the nose: “You messed up with that one. Don’t do it again. Vote for the people you want to stay.”

This season might incorporate the save later down the road, but the damage is already done. The weaker dancers are meant to go home early on Dancing with the Stars, not the stronger ones. There’s no point in a judge’s save if the public have already sent home the contestants they would’ve saved.

It’s probably too late to change things at this stage. There are only four more weeks of competition, much shorter than previous years, and it’s not like they can just bring back Gray or Matthewson. The damage is done, and all the producers can do at this stage is fix it for next season.

Bring back the saves, bring back the dance-off, bring back anything that can safeguard against the caprices of the public. The public shouldn’t be given this much power on Dancing with the Stars. It should be saved for silly stuff, like elections.