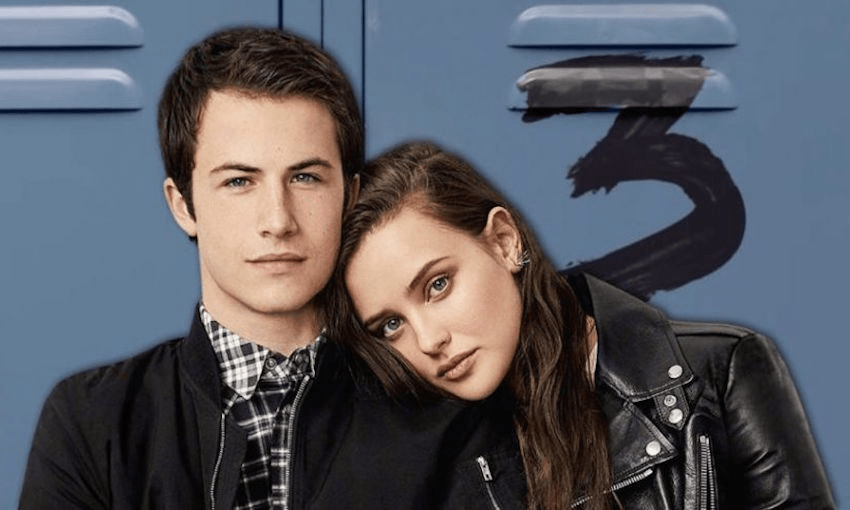 On the back of season 3 of Netflix’s hit teen drama 13 Reasons Why, Katie Meadows argues that the show’s unremitting darkness poses real risks to young viewers.

Two years after it first aired, and a month before the release of season 3, Netflix announced it was at long last cutting the painfully graphic depiction of Hannah Baker’s suicide from season one. Unfortunately, with a show as bleak as 13 Reasons Why, the cut barely registers among its seemingly unending montage of grief; the latest season is just more of the same.

Season 3 unfolds as a murder mystery: star football player and serial rapist Bryce Walker has been found dead, and it seems like every character had a motive for wanting him gone. With Hannah Baker no longer literally haunting Clay Jensen, this season is narrated by newcomer Ani Ahchola, who transfers to Liberty High after her mother takes on an in-home position caring for Bryce’s dying grandfather. Ani becomes quickly entangled in the poisonous drama of a high school dripping with scandal, and her unreliable narration builds as the secrets spill. It’s a very dramatic, beyond exhausting season of television that feels like having a metal spike of angst pushed through your skull. Between terrible writing, crass stereotyping, plot holes aplenty, extreme violence and a second half that focuses entirely on the humanising of sociopathic rapists, 13 Reasons Why is everything you don’t want the teenager in your life to see. Unfortunately, they’ve already binge-watched it twice.

At its core, 13 Reasons Why is nothing but an onslaught of misery. There are no light moments, no small talk that does not involve either existing trauma or a horrible new one, like a character’s heroin relapse or the discovery that someone else has been sexually assaulted. If 13 Reasons Why exists to “raise awareness” of these issues, it hurtles past that goal straight to “there is no escape from debilitating trauma and life is eternal suffering”. It is a show completely devoid of hope.

As a student at Liberty High, if you are in trouble there is no-one who can help you: not your friends, your parents, your school, or even mental health professionals. It doesn’t give you any solutions to your problems, it just shows everything not to do by demonstrating how horribly your decisions will turn out.

13 Reasons Why is the televisual equivalent of self harm.

13 conversations to have about 13 Reasons Why: a mental health expert on how to talk to young people about the issues covered by the show

The effects of trauma echo through every generation. Trauma is our emotional collateral for 100 years of human violence to each other, from war to human trafficking to domestic terrorism. On August 7th of this year, the sound of a motorcycle backfiring triggered a mass panic in Times Square, as gun violence in America has hit such a peak that an entire country has PTSD. Season 2 of 13 Reasons Why, released in 2018, actually ended on a school shooting cliffhanger, a decision that seems willfully harmful during the still very much on-going epidemic of mass shootings in America. Potential school shooter Tyler manages to come out of season 3 seemingly healed from years of bullying and the most upsetting sexual assault scene I have ever seen on television. But even this positive development the show refuses to treat sensitively, leaving its characters to babysit Tyler every waking moment and remove his guns themselves. It’s both baffling and offensive.

Of course it makes sense to make movies and television about trauma, and it’s important to educate people on mental health and sexual violence. But none of these shows that claim to raise awareness actually prioritise the real-life victims of trauma who are consuming their content. Not only does a graphic depiction of date rape not do jack shit to “raise awareness”, it can greatly affect viewers who have gone through these experiences. Increasingly it feels like in order to watch shows in this so-called “golden age of television” I have to sit through explicit content that I just can’t handle. And for what?

When I watched Big Little Lies, I was constantly caught off-guard by visceral scenes of domestic violence with very little warning. I couldn’t help but wonder how Big Little Lies makes its target audience of older women feel – many of them will have gone through experiences like Nicole Kidman’s character but may not have access to the tools needed to process such trauma, whether due to generational stigma or a lack of resources. Some shows, like The Handmaid’s Tale, I can’t watch at all.

And what about the new trauma created in the minds of young and impressionable viewers? Because the degree of realism in some of these scenes is definitely traumatic. New Zealand had to create a whole new rating (RP18, meaning viewers under 18 must have a guardian or parent present to watch) to deal with the content of 13 Reasons Why, but there’s no way to ensure kids aren’t watching this show alone. The New Zealand Mental Health Foundation has issued warnings before the release of every season, urging parents and caregivers to look out for young people who will be watching the show and may be negatively affected by its content. Despite all these precautions which should call into question the necessity of the show even existing, Netflix has just announced 13 Reasons Why has been renewed for a fourth and final season.

I know 13 Reasons Why is not the show for me, but I find myself drawn to watching it every fucking year. I watched the first season on the overnight bus from Auckland to Wellington, after travelling north the day before by car for the funeral of a friend who took their life. As an agoraphobic very much away from home, after 10 panic attacks in 24 hours I bought a bus ticket and left Auckland immediately. I missed the funeral and I watched this horse shit among all that.

I felt high off the self-flagellation I was putting myself through, a new peak of wallowing in my depression as I punished myself for letting my friend down. Shows like 13 Reasons Why beckon in viewers who have endured trauma with the promise of subject matter they can relate to, only to hold their heads under water and drown them alongside its ill-fated cast of troubled teens.

If you or someone in your life has been affected by the topics covered by 13 Reasons Why, I beg you not to use this show as a guide for supporting the people you care about. Life with trauma and mental illness is never going to be an easy road, but I promise you there is a great deal more hope for you beyond the optimism-barren hellscape that 13 Reasons Why has to offer.

Need To Talk – Need to Talk? Free call or text 1737 any time for support from a trained counsellor