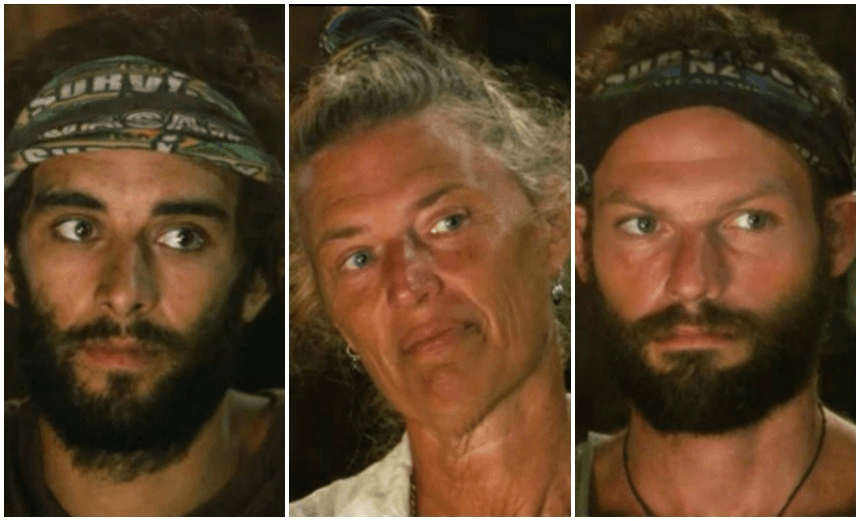 Survivor NZ Power Rankings, Week Nine – And then there were three…

Superfan Joseph Harper tackles the last week of Survivor NZ, and makes his predictions for the big finale. Click here for last week.

So we’ve got our final three. Three big episodes down and one massive (very long) finale to go. Tom, Barb, and Avi have squirmed, tricked, and made nice all the way to the top and now one of them is going to be crowned New Zealand’s first ever Sole Survivor.

The best part is that the winner is legit up in the air, which basically never happens in real Survivor and is pretty exciting. Say what you want about how budget the challenges are or how crappy the strategic gameplay has been, but they’ve served us up a nail-biter and that counts for something.

Big week of episodes that started on an absolute high with some stellar wordplay from teacher Tom via Barb Marley.

Great stuff and the first part of what was obviously a huge week for Mr. Tom. He fell in love with a beautiful stranger (pot)

Surely get you a man who looks at you the way Tom looks at that pot. I can’t believe it took us this long to get a hint of his personality. Look at those flams and paradiddles!

Also love the look on his face at the end when he remembers Keith Moon died before he ever got to see an episode of Survivor.

We were also blessed with a couple of all-timer challenges. The one where the winner got to look at a video on the phone was a stunner. So exciting and cool, shout out to Barb the legend for pulling out the win.

But more importantly, how adorable was 1) Avi’s mum, and 2) the fact that singing potentially viral acapella parody songs runs in the viral cop’s bloodline! Also it was nice that we got to meet Barb’s son and his beautiful avian wife.

That was good. But then there was the greatest reward I’ve ever seen in all my life. Ladies and gentlemen… THEY WERE PLAYING FOR ALISON’S PANTRY!

Crazy. Crazier still, the castaways went absolutely apeshit! They were gagging for it! They fully busted a nut! Did you hear Nate’s “Ooooh yeah baby!” when Chisolm unveiled the nuts? Did you hear Avi say he can’t wait for some nougat and dried figs? Has any person in the history of the world found themselves in a state of moderate starvation and wanting to eat nougat and dried figs? The answer is NO!

Look, I love nougat (I don’t know what it is), but if I’m hungry and in Nicaragua, there is 100% chance that nougat is nay on my agenda baby.

Then when Nate and Avi actually win, they had the gall to give them a small size pick n’ mix bag to fill up.

We’ve all been to the supermarket. We all know how big those baggies get. Give them the big baggies. What are you gonna do, pack up all the dried apricots and fly em back to New Zealand? They won’t clear customs. Oh my god and then they gave them a glass of water. I tell ya, I was crying. Tears were in my eyes at the very sight of Nate and Avi drinking a glass of water.

Oh mercy. Not an amazing week for Nate, who’s rugby ticket story was delivered in the style of this guy. Much worse week for Mike who got brutally roasted down to a crispy wee chippy by Barb at tribal. Here’s a delightful three-part series I call “The Roasting of the Sparrow”.

Dayum. Heartiest congratulations to Avi, who managed to keep his bromance with Tom alive from day dot to day’s end.

I mean he definitely would have won against Barb and Nate, right? What do you think? Was it a good idea for Avi to ditch two people that the jury kind of despised, just so that he could sit beside his best mate who is universally respected and beloved?

Before we break down our finalists, it’s only fair we say goodbye to the four fallen heroes from this episode.

Shay, at least you got to go out with a funny line about brownies and then absolutely 100% glam out on the jury. Needless to say, you’re my new fav Mormon (apologies to the Ball family from my high school).

Honestly, Jak constantly whinging about everything and basically telling production to eff off has easily been my favourite incarnation of him. Loved when his shoe got wet. Loved when he went batty. I reckon if there is every All Star Survivor NZ, Jak is a lock. I hope we get more ‘dark/gamer Jak’ than ‘doing a joke Jak’.

PS: have you guys seen how obscenely jacked Jak is looking in post-game press? Damn fella!

Imho Nate’s hat has been the breakout star of this season, and although I’m afraid of police officers in real life, I’ve never been afraid to take a deep stare at Nate’s prime accessory. The viral cop got pretty predictably vaccinated this week, but I think he’d be the first to say that he ‘gave it a good nudge’ or some other funny New Zealand saying.

Please raise your hand if you wish you weren’t so mean to someone you perceived as ‘an old lady’ throughout this whole season,

Yeah I agree, probably a bad move in retrospect. Still, gotta feel for Captain Sparrow aka Goliath aka Redemption Island Jesus. He sold his sanity to the game on that crappy looking island and got his ass booted the moment he got back in the hunt. Well, I guess there’s a lesson there (the lesson is that Redemption Island is a bad format).

Anyway, enough of the losers. Who do we think should win?

What do the Survivor NZ Superfans Reckon?

According to data pulled from a Facebook group, Tom is the hot fav, edging out Avi, with Barb as the rank outsider.

What do I reckon?

I reckon Lee and Jak are locks for Tom. I reckon Sala and Shay are Avi stans. I reckon Nate supports his pal Barb. I think Shannon (the savviest player) sees that Barb deserves it more than the two lads. That ties it up and puts it all on the gorgeous shoulders of Mike Sparrow.

Here’s my hope: Mike learned some humility after getting schooled at his last tribal. After being forced into deep reflection, he realises that he misjudged Barb and was blinded to her game prowess because of superficial factors. He sees the light and makes the right (and most fun) call.

Fortune favours the bold. It’s Barb time, baby. Gimme the Barb, boys, and free my soul. I wanna go with Barb on a horsey stroll.

My call: Barb is going to win Survivor NZ *places teabags on eyes and crosses fingers*.