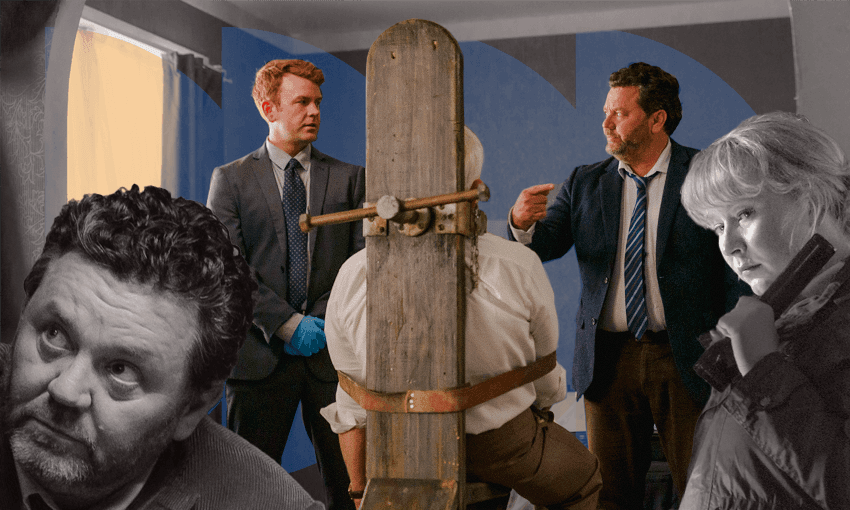 Would you rather drown in a vat of wine or be blown to pieces at a steampunk party? Alex Casey presents every death on the New Zealand murder mystery series, each one more outlandish than the last.

Warning: The following ranking contains famous New Zealand actors appearing to be very dead. The Spinoff has been assured that these deaths are entirely “fictional” (not real).

The fictional town of Brokenwood is a peaceful rural idyll where you are almost guaranteed to get murdered on arrival. For seven seasons – soon to be eight when the show returns to TVNZ1 this weekend – the sleepy spot has hosted a slew of surprising murder scenes, each grisly mystery neatly solved by the crime fighting team of detectives Mike Shepherd, Kristen Sims, Daniel Chalmers and Sam Breen (RIP) within the feature-length runtime.

As Nic Sampson, who played Breen, told The Spinoff in 2017, nobody is ever safe in the Brokenwood postcode. “You might think that joining a debate club, or kite flying will be harmless enough… but somebody will still find a way to murder you in a poetic way with your hobbies.” Given that The Brokenwood Mysteries has been running since 2014, perhaps it’s no surprise that each murder scene seems to be more outlandish and surprising than the last.

But which murderous moment on The Brokenwood Mysteries is the very wildest of them all? Ahead of the return of the series to TVNZ1, The Spinoff mooched through mud, creaked open coffins and scrambled through skeletons to bring you this ranking (with emphasis on the rank).

30) Dead guy in the river (season one, episode one)

It is a scientific fact that any bog, creek or wetland within a murder mystery show must contain at least one dead body. That body must be discovered by two local fishermen and the detective must crack a joke that this is “probably the one they wish had got away”.

29) Knife in the back (season six, episode two)

There’s a nice flourish here in that the deceased is a crime writer whose latest work is literally called “Knife in the Back” but otherwise a pretty stock standard stab-in-the-back entry.

Who hasn’t been killed in the forest at their own stag do?

Very “Sherwood” and therefore “of the moment” but also, poor Jacqueline Nairn. First dying on the floor of the Shortland Street cafe, now this? Justice for Wendy.

Look, a bike ride up the side of a mountain would probably kill most of us before we even get to the toxicology report. When it’s revealed that Lester Nyman actually died of “astronomical levels of caffeine” in his system, one can only say this: don’t @ Lester until he’s had his deathly java fix.

25) Acid burns on a golf course (season one, episode three)

Move over Sherwood once more, Brokenwood did the murderous golf course first. Funny how when one of the Brokenwood Golf Club committee members is found dead in a sand bunker it is a “mystery”, but when I black out at the sight of a noseless clown at Holey Moley it’s “annoying”.

I am here to inform you all that Ronnie Van Hout is at it again.

And that’s why you never, ever, ever bring your favourite country and western act to Brokenwood.

Another Brokenwood board member gone too soon. In this episode, the chairman of Brokenwood’s Classic Car Restoration Society is found dead next to his beloved El Dorado. But did he die siphoning petrol or did someone want him El Deado? I think we can all agree: the latter.

Who hasn’t been dead on their hen’s night? (This one is higher than stag because of feminism.)

Brings a whole new meaning to “Last Christmas” ha ha. Nah but this guy was the mayor :(

“You are the weakest link,” she sniffed. “Goodbye.”

I believe Cardi B said it best when she said: these is bloody shoes.

It’s my party and I will get shot by four men wearing dog masks robbing the Brokenwood Bank and die face down in my birthday cake if I want to.

An actual Final Destination nightmare to die like this in a sauna.

An actual Final Destination nightmare to die like this in a spa.

12) Pitchfork to the back (season seven, episode four)

Shout out to our Waverley for delivering one of the most (literally) staggering death scenes ever committed to the small screen. Stumbling out into the middle of the Brokenwood Farmers Market, Wave collapses to reveal the devils fork lodged squarely in her back. Thoughts with Nick Harrison at this time, and every time.

You just know that when a show called All Things Old and Beautiful comes to town, it’s only a matter of time before Mark Hadlow is found dead in a WWII torture device with his tongue poking right out. You just know.

I’ll just leave this one here I think.

9) Tied to rugby goalpost in the nuddy (season two, episode one)

Is it still streaking if you are not running but are instead dead and tied up to a goal post with a pair of undies in your mouth emblazoned with the initials G.G? These are the things that keep me up at night.

How most of us feel during an audience Q&A at the film festival, amirite?

I once rode this very Ghost Train ride at the Easter Show and my friend’s black skinny jeans (it was 2005) got slashed at the knee by something sharp in the darkness. I hadn’t thought of that until revisiting this episode, where A&P boss Harold Wilbury is found dead after the cursory minute-long safety check on the ghost train. Either art is imitating life, or something/someone in the humble Ghost Train has a knife.

Thou canst imaginest a more embarrassing way to shuffle off this mortal coil.

5) Explosion at a steampunk party (season six, episode one)

Actually, yes thou can.

This entry goes out to anyone who ever said Coffin Flop is not a real show. “It’s just hours and hours of footage of real people falling out of coffins at funerals,” they said. “Just body after body falling out of shit wood and hitting pavement.” In this innovative collaboration between Brokenwood Mysteries and Corncob TV, one particular coffin flop led to the most startling revelation of all: that the deceased is not poet Declan O’Grady at all, but a young woman who looks a hell of a lot like JJ Fong. And you said Coffin Flop was not a real show.

3) Drowning in a vat of wine (season one, episode two)

The only thing scarier than dying and being turned into a scarecrow is dying in one of those ACC ThinkSafe ads from the early 2000s. Actor Mike Edwards has managed… both? Is there anything that man can’t do?

1) Lord of the Ringz tour (season three, episode one)

This is truly how I hope to go out: poisoned with spider venom and wrapped up in a fake spider web and placed in a knock off “Lord of the Ringz” tour. Five stars, no notes, god defend our free land.