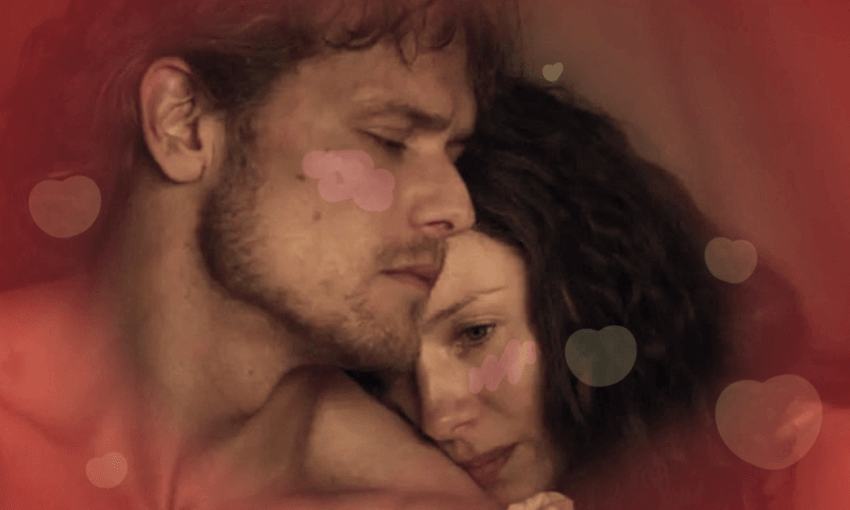 Outlander just made a bloody strong (and sexy) return

The season premiere of Outlander was, as Queen Oprah would say, a full circle moment. Mostly because Claire Fraser kept wanging on about all the circular things she could think of – her wedding rings, the hangman’s noose, those soft ginger curls she rests her sweet cheeks upon every single night. Planets, clocks, stone circles, all out to screw up our lives and send us hurtling into a disruptive vortex of time and space.

Shush now, Claire. The world is full of lovely round stuff too, like a perfect Lallybroch potato or Coco the Talking Coconut. Let’s move on, because I’m here to recap the truly important moments of Outlander. Case in point: our hero in a tricorn.

It feels like years since we last left Claire and Jamie marooned on a beach, having washed ashore after a shipwreck at the end of last season. If you thought that was an emotional shit storm to leave you drowning in a pool of your own tears, wait until old mate Hayes is hanged in the first five minutes. Jamie promised he’d smile at Hayes as the gallows dropped, because who wouldn’t want to shuffle off this mortal coil while looking at these faces?

Hayes’ death was just the beginning. While this episode lacked the emotional punch of previous season openers, there was more drama than Jamie’s had hot haggises.  There were two deaths, a robbery, a post-traumatic breakdown in a grave, a dinner party, a new dog, Highlander hanky-panky, ring-swallowing, a pregnancy, an eagle catching a fish in a river and a quick trip back to 2000BC, just for the heck of it.

All this, and not a single mention of potatoes? How very dare you, Outlander.

Season four might be set in a different country, but this was still Outlander through and through. “Nothing is lost, only changed,” Jamie told Claire, referring to both their enduring love affair and his fondness for a pointy hat. “That’s the first law of thermodynamics,” Claire whispered back romantically. Thank you Outlander, for confirming my long-held opinion that there’s nothing like a bit of dirty talk about the foundations of physics to get the party started.

But the party don’t start ‘til Stephen Bonnet walks in. Forget Black Jack Randall, because Outlander’s new villain is a charming manipulator who jammed his finger into a woman’s mouth to steal the ring she was trying to swallow. He hid next to a dead body to avoid the hangman’s noose. He persuaded Jamie to help him escape, and later stormed the Fraser river boat to threaten Claire, kill Lesley and mess up Jamie’s hair.

For the love of a thousand ginger kisses, anything but the hair. Stephen Bonnet is a piece of work, and I love to hate him already.

This episode had the tricky task of setting up the rest of the season. Marsali and Fergus announced they were pregnant, while Jamie and Claire decided to stay in North Carolina. Claire knows this is a dumb idea, because they’ve aligned themselves with a Governor who in eight years’ time will be on the losing side of the American Revolution. Jamie and Claire could risk everything they’ve worked for, lose everything they hold dear. If only there was a way they could change the future WAIT WHAT.

Let’s not panic. The future is now, and Jamie and Claire need to live somewhere warm so they can camp outside and have midnight sponge baths together.  They’ve still got the horn for each other after 24 years of marriage, and their love flowed like the Mississippi, carrying us along in their riverboat of surging emotion. Poke that stick in the riverbed and push us closer to heaven, Outlander, because this show is nothing without Claire giving Jamie her sexy time eyes and Jamie letting Claire swab his chest with a flannel.

This is the sort of alternative healing I can get behind. God bless America.

Alas, the Love Boat was sailing into dark waters, and the final minutes were tenser than the time Claire couldn’t get her 1950s gas stove to work. ‘America the Beautiful’ played as Bonnet forced his way aboard. He pummelled Jamie to a ginger pulp, slashed Lesley’s throat and forced Claire to hand over her wedding rings. She managed to swallow Frank’s, but Jamie’s ring disappeared with the rest of their worldly goods.

This was a full circle moment Claire never saw coming. One ring to rule them all and one ring to hide behind your uvula, but it’s not the ring belonging to the husband you’re currently having frontier sponge baths with. Thanks to Bonnet, Claire and Jamie’s American dream lies in pieces. Will they recover? With 12 more episodes to go, lets bloody well hope so.