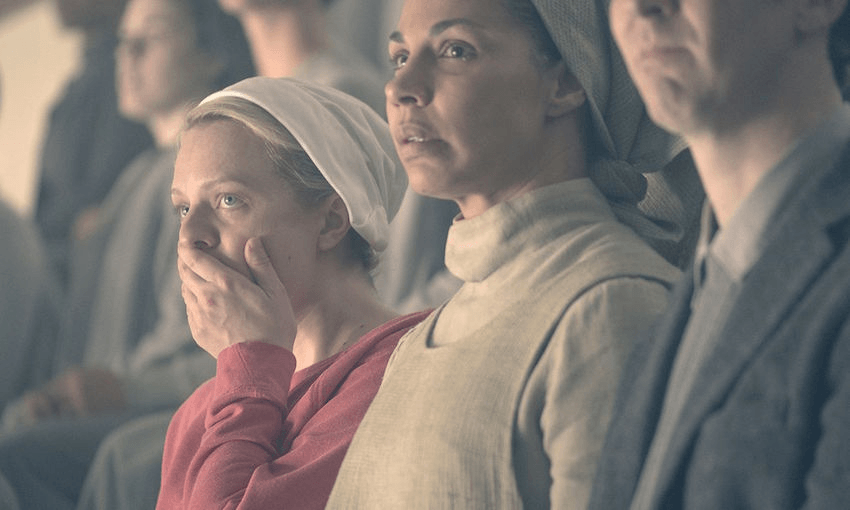 Love is patient, love is kind, love is not knowing what beautiful nightmares await us in next week’s season finale. Tara Ward recaps the penultimate episode of the second season of The Handmaid’s Tale.

Time flies while you’re having fun in the apocalypse, and several weeks have passed since we left June bleeding on the floor of an abandoned house after giving birth. June was Handmaid of the Month after delivering Holly on her own, and Aunt Lydia showered her in muffins as a reward for her astonishing powers of reproduction. Praise be, blessed be the bran.

Serena, meanwhile, was a vision of Madonna with child, resplendent in the hallowed light of motherhood. She renamed the baby Nicole, which I can only assume is an in-joke about the child’s real baby daddy. Poor Commander Waterford will be reminded of his failure to procreate every time he says his daughter’s name. It’s a masterpiece of manipulation from Serena Joy and I tip my bonnet to ye, m’lady.

June’s womb was the hottest property in all of dystopia, and a chirpy Aunt Lydia enjoyed the negotiations over who would be the next tenant. This wasn’t the case for fellow handmaid Emily, whose deadly vagina made the men of Gilead recoil in terror after her last Commander carked it during The Ceremony. There were no bran muffins for Emily, just a new posting in a haunted house with a mad woman in the attic. No big deal.

But hold the phone, stop the bus, someone send a fax to Air Force One, because Emily’s new commander is Josh from The West Wing. Commander Joseph Lawrence was one of the original architects of Gilead, and he’s a riddle wrapped in a mystery stuffed inside a sack of radioactive waste. Lawrence was dismissive of the usual Gilead greetings, knew everything about Emily’s past, and kept his wife locked away upstairs. I mean, even Aunt Lydia was shocked at the state of him, and she rips people’s eyes out for a living.

There’s some crazy Jane Eyre revisionist shit going on here, and Emily needs to get out of the Red Room before Joseph starts telling his classic yarn about the time he was the White House Deputy Chief of Staff and singlehandedly saved Earth from being hit by an asteroid.

June was also on the move, back to Casa Waterford in the hope that being nearer Holly would increase her milk production. This also put June closer to Nick, so they could discuss how beautiful their baby was and whether they should escape to Hawaii so Holly could eat sand for the rest of her life. Is it weird that Nick has met everyone in June’s family – her husband, her best friend and her daughter? No, it’s amazing. Their new life sounds incredible and this was a pure and sweet moment amid a violent sea of misery and despair.  We must bathe in its golden light while we can.

No-one is allowed to be happy for long in Gilead; ashes to ashes, dust to dust, muffins to crumbs. After June told Eden that “in this place, you grab love where ever you can find it,” Eden and Isaac ran away together and suddenly the shit hit the dystopian fan.

Their disappearance did nothing for Waterford’s abandonment issues, and don’t be surprised if the only words Fred manages to spell during his next Scrabble game are ‘hold me closer, Tony Danza’.

The young lovers were caught the next day. I’m no expert on capital punishment, but the weights they attached to Eden’s ankles made me nervous. As did those old blokes quoting scripture, and the high diving board, and that deep swimming pool.

Eden recited a bible passage about the power of love before she and Isaac were pushed into the water.  They drowned as their families watched, and it was grimmer than the artwork on Commander Lawrence’s walls. June wept, Serena sobbed, and I think I’ve started lactating again. Send help, ASAP.

Love is patient, love is kind, love is not knowing what beautiful nightmares await us in next week’s season finale. Was Eden’s death a turning point for Serena? What is Commander Lawrence hiding in his weird bag of tricks, other than his truth-speaking wife? Why does Aunt Lydia get happier the worse everything gets, and does anyone really know the Muffin Man? Sweet dreams, friends.

You can find all these wonderful things on Lightbox right here: