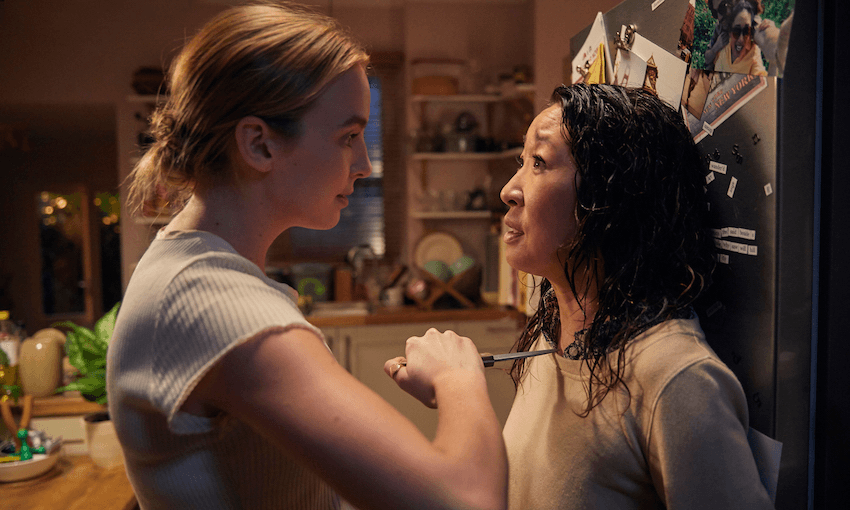 A spy thriller by the woman who wrote Fleabag starring the woman who made you cry as Cristina Yang. Why wouldn’t you want to watch that? Sam Brooks reviews.

There’s a moment about ten minutes into Killing Eve where Eve (Sandra Oh) and her boss Bill (David Haig) are legitimately, honest-to-God hungover and slogging it through work anyway. It’s a thing that we all experience – who among us hasn’t come into work on a Friday a little bit fuzzy around the edges? But how often do you actually see it portrayed on TV? And not in the comical ‘I can’t even move why does God hate me’ kind of hangover, but the kind of hangover where you know you have to get through it anyway. He takes a bit of her croissant, is a little bit grumpy, and they both know why: They were singing karaoke.

The only difference between their job and yours (probably, I don’t know your life) is that they both work at a spy agency and they’re in a meeting to try find out who killed a prominent Russian politician the previous night.

It’s these little moments that make Killing Eve, the new show from Phoebe Waller-Bridge (Fleabag), so special. When you think of spy thriller, you don’t think of humour and you definitely don’t think of the mundane reality we all live through. You think of wigs, sex scenes and highly choreographed fight scenes. Killing Eve has none of that, and it’s all the more distinct for it. It’s a spy thriller that reminds us that even if you’re a contract killer, even if you’re an intelligence analyst (who later becomes a spy), you’re still someone who craves a croissant when you have a hangover.

The spy drama is the big sell of Killing Eve, and the overarching plot follows Eve as she hunts after a contract killer named Villanelle (a chilling Jodie Comer, of Doctor Foster fame). But what the show is actually about is these two women trying to find satisfaction in their lives. Eve is a shockingly talented, observant and driven analyst who is frustrated when she has to go out of her way to do a job that nobody around her seems to be doing, while Villanelle seems to kill simply for the pure joy she gets out of it.

But the hook, the real hook, and the reason why you watch this show is to see Sandra Oh. Oh is one of the most talented television performers I’ve ever seen. Her performance on the early great seasons of Grey’s Anatomy and the later less-great seasons is one of the great television performances of our time, and it turned Cristina Yang from what could have been a stereotypical character into something layered, beautiful and achingly real. She took some old, hackneyed straw and spun it into pure gold from the moment she stepped onscreen.

With Eve, Oh is working with gold right from the start. Eve is a strange and complicated character; she’s an American living in England, she’s an intelligence expert whose conversations with her husband are about how they would murder each other and get away with it, her comfort movies are loud action films, and when she does her job it’s with the same eyerolling, clockwatching manner that many people do it. Oh leans into the normality of it, and finds beautiful moments to flatten the mundanity of Eve’s life in ways that make her feel both more comic and real, and then finds the right moments to heighten her reactions to sell it.

Oh is one of those performers who does heightened very well. It’s not the same as overacting and it’s not the same as being hammy (this isn’t a Ryan Murphy show), it’s about realising what the material needs and rising to it. She did it on Grey’s Anatomy and created some of the more memorable and wrenching moments of that show, and she does it a few times in the first episode of Killing Eve alone. It’s a kind of performing that needs such pitch-perfect calibration to make it fit within the world of the show, and it’s great to see a show that not only uses Oh’s tendency towards this kind of performance so well, but even requires it of her.

Despite the potential mad-libs nature of the initial pitch of this show (It’s a spy drama! By the woman who wrote and starred in Fleabag! With Sandra Oh!), Killing Eve is a genuine gem and a keeper. It’s doing what no other show really has done before, or even thought to try, and it manages to make a show that is at its core about two women finding out what their life actually means to them. Plus it’s a compelling spy thriller. Essential TV.

You can stream Killing Eve on TVNZ on Demand starting April 9th at 6PM.