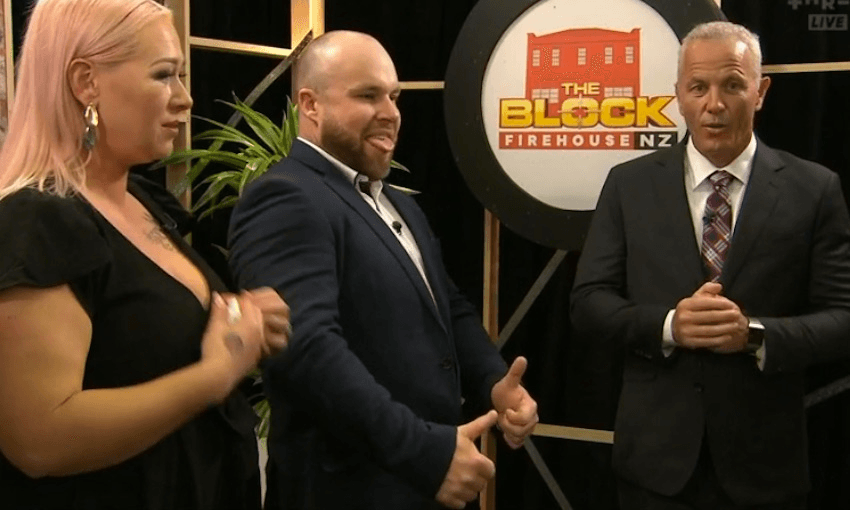 Finale recap: The Block NZ live auction is officially out the gate

It’s auction night on The Block NZ, and tonight the Firehouse burned with the smell of broken hopes and dreams. Tara Ward recaps the hijinks and heartbreak of this year’s live finale.

“IT ALL ENDS RIGHT HERE!” yelled a perky Mark Richardson, as he welcomed the nation to The Block NZ 2019 live auction. Mark was pumped, the teams were glowed up like a gold feature wall, and the Grand Millennium was filled with a bunch of millionaires frothing at the mouth in anticipation. “All our teams want now is fire in the bellies of our buyers!” Mark shouted, although maybe they also wanted a Dinner Wars zombrero filled with corn chips and undercooked chicken? Gives a similar burning in the belly, in my experience.

The Block NZ auction night is the night where anything can happen, when plans go out the gate and down the road and before you know it, the whole bloody show has shat itself. It’s the night when 12 long weeks of renovating blood, sweat and tears is reduced to a bloopers reel, some excellent Mark Richardson dad jokes, a million recaps and four nerve wracking live auctions.

The People’s Choice Award went to Sam and Ethan, two classy individuals who were too good for this show. Stacey and Adam announced the auction order, putting Lisa and Ribz up first, then The Boyz, themselves third and finally the Penthouse. Was the Penthouse placed last because they’ve been shit at finishing all season? “It is what it is,” Ribs said of the auction order, possibly outing himself as a secret Love Island fan.

Poor Lisa was crying from nerves, and I was crying from having to sit through five ad breaks in 40 minutes. Bidding on Lisa and Ribz’ apartment quickly passed the $1 million mark, even though their auctioneer described their apartment as “an antidote to perfection”. Lisa put her face in her hands while Ribz remained as solid as a partition wall, and the house finally sold for $1.34 million, giving Lisa and Ribz a cool $50,000 profit. “Boom, Ribz!” Mark said. “Boom!” Ribz replied.

Next up was Sam and Ethan’s apartment, and we crashed from a giddy out-the-gate high to a shattering low. Their apartment sold for $1.39 million, the exact reserve of the property. They’d borrowed too much from the Bank of Mark, which meant Sam and Ethan made exactly $0 profit. It was heartbreaking, and it didn’t even help that Mark said their apartment was “pretty damn skux”. Oh, Mark.

“Sweet as, that’s how it rolls,” the boys said, as Adam and Stacey went to auction. “The nerves are jangling,” Mark admitted, as Adam reckoned his apartment was the best and Stacey announced she and Lisa are planning on launching a podcast. Their auctioneer quoted the Dixie Chicks and Tina Turner and his own mother, before bidding stalled at $1.46 million and the house was passed in below reserve. No sale, no happy faces.

“It’s been a lot of fun,” the auctioneer said, as he departed the stage. He was the only one enjoying himself, because Stacy and Adam looked understandably miserable and I felt a bit sick.

Finally, it was Sophia and Mikaere’s penthouse. By now, Lisa and Ribz were the only other team in the running for the $100,000 prize, so it all came down to this auction. “Let’s release the handbrake and hold nothing back,” the auctioneer said, but the auction stalled at 1.45 million, seemingly way under the reserve. Before Jesus could take the wheel and release the handbrake, Sophia and Mikaere’s apartment also passed in for negotiation.

With Apartment Two the only house to sell for profit, Lisa and Ribz were announced the winners of The Block NZ 2019, scoring an extra $100,000 on top of their $50K profit. I’ve never seen a sadder Block finale, with nobody in the mood to celebrate after such disappointment. Mark was right, it does all end here, but that’s what sucks. Still, Lisa promised she’d take everyone to breakfast and pay their phone bills, and Mark promised us a new season of The Block NZ in 2020.

Oh my sweet zombrero, let’s hope it’s out the gate.