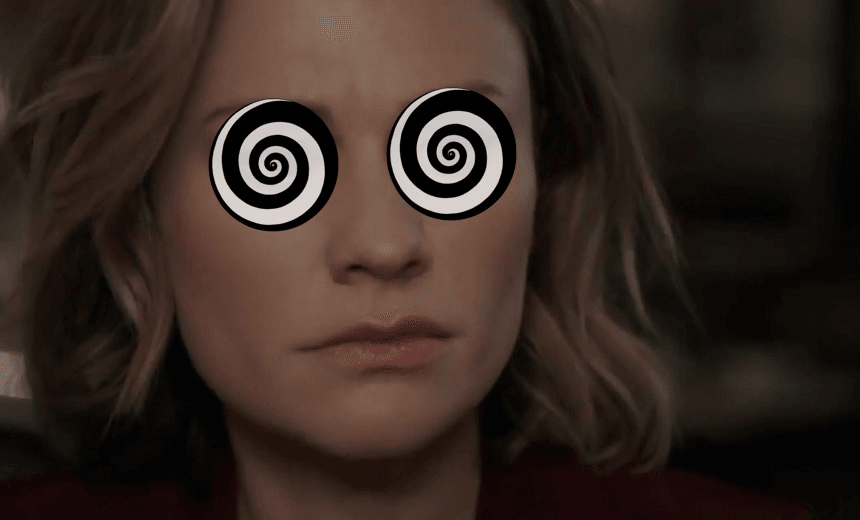 If you haven’t heard of Philip K Dick’s Electric Dreams by now, it’s basically a buzzy anthology series from the dude who dreamed up Blade Runner that burrows deep into your brain grapes. With every episode set in a different world, with different characters and themes, prepare for a Black Mirror-style pick n’ mix of the full human experience. Bhuja mix, caramels, the whole lot.

After watching the premiere episodes and picking up the pieces over email, The Spinoff’s Alex Casey and José Barbosa reconvene online to solve yet another existential riddle. This time, the riddler is one of our own: Anna Paquin.

José Barbosa: Hi there Alex, I’ve just finished watching episode five, ‘Real Life’. I feel like I need to talk to someone because my brains are dribbling out me ear holes.

Sarah, played by Anna Paquin, is a cop living in some incredible flying car future, but is haunted by a past event where a lot of her fellow police officers were killed. She’s still pretty shaken up, so her wife gifts her a virtual reality holiday to live as someone else.

In the VR world she becomes George, played by Terrence Howard (otherwise known as the guy who got fired from Iron Man), a rich technologist who’s created a VR headset which he puts on and becomes … Sarah! Future super cop lady! #mindexplodes

JB: Well, I guess that’s the whole point? Once you start asking what’s real, you find the bar is actually quite low. Pretty classic sci-fi mind-jiggery-pokery in my opinion.

And I like how Sarah’s “reality” seems pretty self-aware, like it knows it’s in a Blade Runner-esque fantasy. Complete with a very loud and sweaty sex scene which popped up from nowhere. This was fairly embarrassing because I was watching on my computer at work (with headphones) on my big monitor. I had to move very quickly to hide the window.

AC: I was in the same boat. You just gotta turn the screen brightness way down, hit that sucker on mute and pretend to be asleep. Works every time. That Blade Runner-esque element was cool eh. At first I was like, man, this is some fake looking Minority Report touch screen stuff. But, as it turns out, the point is to look purposefully fake.

I was pretty into their bill ordering system at the diner though, no awkward exchange about tips. Maybe the robot revolution will be fine after all.

That was an interesting part of it though, the meta-commentary where Sarah realised she lived in a sexy, lesbian, sci-fi paradise, therefore her reality must be a simulation. I gotta say, it’s nice to see Anne Paquin back as well. Is she low key one of the New Zealand greats?

JB: My partner and I were heavily into the first couple of seasons of True Blood, so for us at least it’s defo not low key. Why is her Oscar speech outfit from when she was 11 not in Te Papa?

Other than the theme of shifting realities and identity, there’s also a strong investigation of guilt and how memory drives it. It’s probably the most emotional episode yet and a high point in the series in my opinion. Strong performances from Paquin and Howard and I liked how quite often the camera was allowed to linger on their faces for maybe longer than we’re used to.

Assuming you don’t have a crushing guilt to suppress, where would your ultimate VR holiday be?

AC: I totally agree: this is the best episode of Electric Dreams so far in my opinion, which is the beauty of an anthology I guess. Maybe also the most Black Mirror-esque offering yet? Beyond all the philosophical hoo-ha, there’s the undeniable fact that immersive VR could literally kill the people who use it.

As for my own VR holiday, maybe I would want to get into the mind of Oprah? Argh no, too much work. I think it would be nice to be a whale for a bit. Nice and quiet, all the tasty krill you can eat, do cool flips and get your picture taken. Who or what would you be?

JB: I just want people to think long and hard about whether virtual reality is really worth it. I mean if you get really into it and end up in there a few days you are going to get real stinky in the real world.

There is gonna be fluid everywhere and the skin around your ankles is going to get that hard crust on it after you don’t wash for a while and your hair is going to be like one huge, bird’s nest dreadlock. It’s not going to be pretty. So this Christmas just think a little bit harder and really mull over that decision. I certainly will.