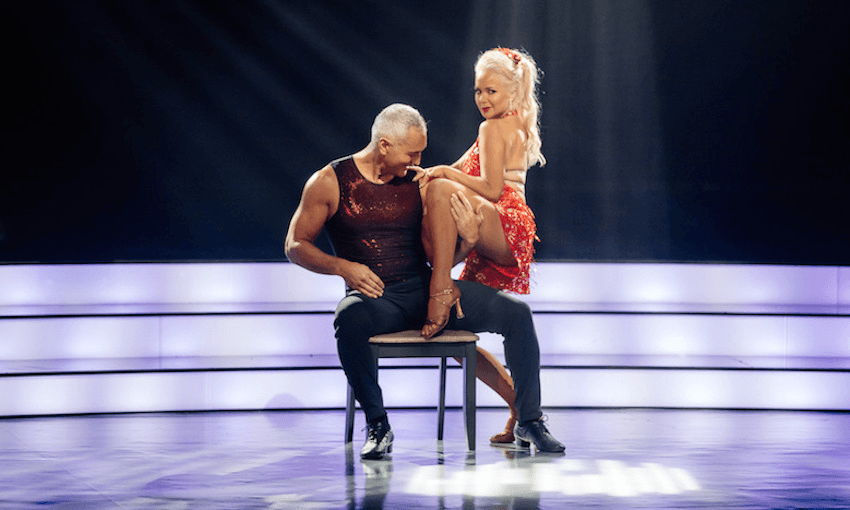 Dancing with the Stars has a women problem – and it’s not pretty.

Dancing with the Stars has a problem with women

Dancing with the Stars has a women problem – and it’s not pretty.

Three eliminations down, three women gone. But why is Dancing with the Stars so harsh to its female contestants? Miriam Moore writes.

The fourth week and third elimination of Dancing with the Stars has come and gone. Once again, the talent was off the charts, and we got to see what Aotearoa’s group of B-to-H-list celebrities can really do. The level of talent was variable as is expected in a gaggle of newcomers, and unfortunately, two stars were destined for the bottom two.

Once again, two very good women were in the bottom two. And once again, I am enraged. Stop voting women off first, New Zealand public!

The comment sections in the wonderful world of social media are awash in support of the men for “giving it a go”. After all, they are doing just that! However, in the deep corners of woke twitter (disclaimer: my preferred corner), there have been murmurs that this show might be a bit sexist.

As per usual, I am probably getting far too involved in reality television, but I have decided to give my support to the dancing wāhine toa of Aotearoa. In loving memory of Jude, Carolyn and Anna, week five needs a new outcome that respects the shit out of what these women are also going through.

Firstly, there is no doubt that every person on Dancing with the Stars is giving it their all. Everyone brings a fantastic and vibrant energy to the floor. Some of the costumes from the show (think Chris Harris’ eyeliner and skirts from last season) have challenged gender binaries in a way that I think is needed in our nation’s lad culture.

The make-up and shiny open shirts is a new look for these men, and it is great to see some of our heroes trying out something different for us to look up to. This is new for the women, too though. Please give them the same pat on the back for “giving it a go”.

It is quite likely that dancing is something we expect men not to be good at, and something we expect all these wāhine to be naturals at. Sometimes society screws up our brains like that, but the truth is, none of the people on this show know what they are doing. They are all doing a very good job of hiding that.

The judges’ comments are not helping this impression. They have more than once encouraged the “but the boys are giving it a go!” mentality. Positive comments for men are often given with a surprised tone, with the subtext of “WHERE DID THAT COME FROM?!”.

There are regular unnecessary comments on looks, both for females and males, which if they are not a direct praise about the styling, should not be part of the feedback.

When giving negative feedback to the women, it is often left at that, whereas the not-so-good men have been praised for bringing a smile and a good attitude to floor despite their faults.

In Guilty Pleasure week, Anna left the judges “speechless” due to her fun interpretation of a Paso Doble. That was not what they expected at all, and their comments were as back-handed as a manicure. This week they said she had returned back to her expected standard. The comments weren’t full of praise, but she still received a 21, a very respectable score.

Two weeks ago, Laura received very unfair critique regarding her lack of emotion in a rumba to ‘Shallow’. She got a solid 22. Please note the following week a slow-motion shot of the emotion from this dance being used by producers to describe an intense night ahead of elimination. After some negative commentary, Walter was praised for his energy and ability to light up the room while receiving a 13. Walter has been safe every week.

The show, and the judges, create a skewed situation. You’ve got a critical comment with a good score tagged onto the end of it for some of the better performers, and a kind comment with a bad score for the less strong performers. But it’s the comment that sticks in the viewer’s mind and influences their impression of the dance. The onus is on the voting public to see through the comments to the score, but we spend far more time with the comments than we ever do with the score, and that’s what we remember.

Let’s be real: many of the men in this show are athletes, which gives them a comprehensive knowledge of how their body moves. Fancy footwork is likely part of their day job. Their strong posture makes for some beautiful, gravity-defying lifts showcasing their professional dance partners, who are much more used to being lifted.

The celebrity women, on the other hand, cannot perform these mid-air lifts. Instead, they must try flashier or funnier moves which are not technically of a ballroom dance genre to achieve the same ‘wow’ factor (see Laura’s sick caterpillar).

Nadia certainly whips up some mean “scrumptious bacon, apricot and sage gluten-free stuffing balls”. But by her own admission, she never wears heels. To imply our nation’s epicurean angel is likely a natural is incorrect. But she tries her goddamn hardest and it shows.

I respect Mike is an older contestant and has a stiffer neck, but I have heard breastfeeding your babies is also quite a difficult and draining task! Oh yeah, did we mention K’Lee and Nadia are BREASTFEEDING? I can’t even keep my Sims alive let alone feed a real-life child, compete in a nationally televised dancing competition and continue to do my other very successful job.

Holy heck, even as a non-mother, my boobs have made it painful to walk upstairs at the worst of times, and seeing some of these women dance without sports bras has me shook with respect.

The demands of this show are huge. Stop expecting that either gender is naturally better and give all the contestants the pat on the back they deserve. If someone did a pretty good dance, it wasn’t nature taking its course! They worked hard for it! Vote for them! I have been lucky enough to attend some of the live performances, and if the nation can give these contestants the same amount of infectious praise and support they are giving each other behind the scenes, then the world would be a better place.

Of course, there will be shock eliminations. That’s reality television, baby! But as you cast your votes this week, remember who birthed you, and ask yourself if she’d be a natural on the floor.

As has been said before, Ginger Rogers did everything Fred Astaire did but backwards and in high heels. Nobody voted her home.