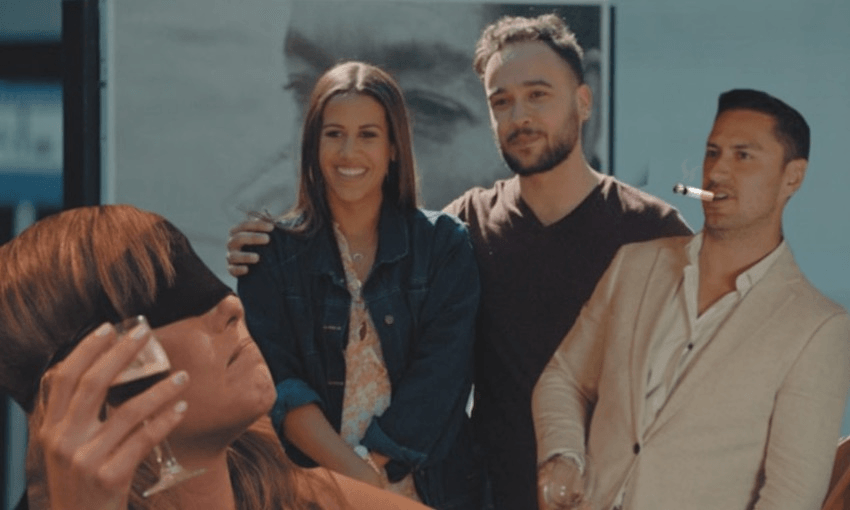 The Bachelorette NZ Power Rankings: A dart to the heart

Alex Casey delivers her fifth power rankings for The Bachelorette NZ, where the lads hit Argentina and things gets smoking hot. Click here for previous instalments.

What a dramatic start to the week it has been. Evacuations, injuries, blindfolds, dehydrated kisses and hospital trips. It was enough to give me (and Tavita) a hernia, but we will get to that later. Other highlights include the lads playing a women’s Argentinian football team to win a Messi shirt (and time with Lesina and Lily, but mostly a Messi shirt) and this cool cameo from the producers. We LOVE to see it.

Also, Lily is the best bartender I have ever seen:

The week began with the announcement that Daryl the Mole has been surreptitiously collecting data on all our contestants, which tellingly put the fear of god into a select few. Liam was shit-scared. Tavita was shit-scared. But it was Glenn who had to pack up his lemons and leave the mansion. “Glenn, I’ve had doubts about you from the beginning,” said Lesina. “You’re not here for the right reasons, and won’t be joining us in Argentina.”

Cue an excruciatingly long walk to the van, where the amateur pick up artist had to pick up the saddest thing of all – his freshly ironed Hallensteins suit.

It’s become abundantly clear that Kurt will never love anyone or anything as much as he loves the Warriors. Give it up for The Mad Baker of the mansion.

Look, we all know you pioneered putting wedges on a pizza, but surely you’ve got more moves than just wedging your arm awkwardly around Lesina???

Extreeeeeemely cursed week for Tavita. First he got the mezzanine room up a giant flight of stairs, which caused him to adopt a Momo-like persona and creep in the rafters while talking about “wees in the night”:

Then he went to hospital:

Then his guts popped out in a gross lump:

Then he SHOWED EVERYONE THE HERNIA

Then he brought home the diagnosis:

Just in time for the Oscars, a truly phenomenal Hollywood performance from Marc, who pretended to be badly injured after falling over during their soccer game.

We Need To Talk About Logan’s Dry Dry Kiss

People were outraged this week to find out Steve’s dirty smoking habit, but I’d like to offer a much more horrible and damaging habit he’s picked up: MOLE BROW ALERT. MOLE. BROW. ALERT.

Man, how weird was #smokinggate? All it took was Aaron mentioning that Steve was an occasional smoker to unleash the angriest version of Steve whomst, ironically, had smoke coming out of his ears.

Get the man a dart for crying out loud.

Despite throwing smoky ol’ Steve under the bus, Aaron stayed top of the class this week. Who can forget this iconic flirt exchange, which could basically be a new ad for Tourism NZ?

“I’d move there tomorrow if it was for you,” said the humble food tech teacher, leaning in for what felt like one of 40,000 pashes. Winner winner, his class is learning how to make chicken dinner.

As far as camera-time is concerned, this week Flynny was deep in the binny :(

Me every time George wears that jacket:
Well you’re walkin’ and a talkin’
And a movin’ and a groovin’
And a hippin’ and a hoppin’
And a pickin’ and a boppin’

He got one on one time with Lily this week, but I think Conor is going to have to inject his conversation with a whole lot more passion and intrigue if he wants to stick around much longer.

“I have zero seriousness at all time,” Liam boasted to Lesina, before confirming that he has never cheated on a girlfriend and has never been homophobic. He’s got his sights set on Lily, though, and I’ve got my sights set on his gravity-defying red beanie. A modern miracle.

You people are talking about “Harley Quinn film” when you should be asking why The Bachelorette NZ is a “Hardly Quinn film” – come back Quinn.

I’m sorry, is anyone ever going to explain what a beer spa is or am I just going to drown in this rancid bath of DB I’ve just drawn myself? Jesse got the single date with Lily this week, and was promptly thrown into a seductive world of blindfolds, tasting platters and giant tankards of beer. Look at that smile!

Lily loves Terence’s girthy white thighs, and I love his Maggi noodle hair. Tie-dye Terence opened up to Lily about how he was struggling on the days where he was away from her, but also is scared to let down his walls.

In exchange, she opened up a jar of runny chocolate spread containing a single rose.

Wait, that’s not actually Tavita’s Porta Potty is it bro?? Hopefully we find out tomorrow night.