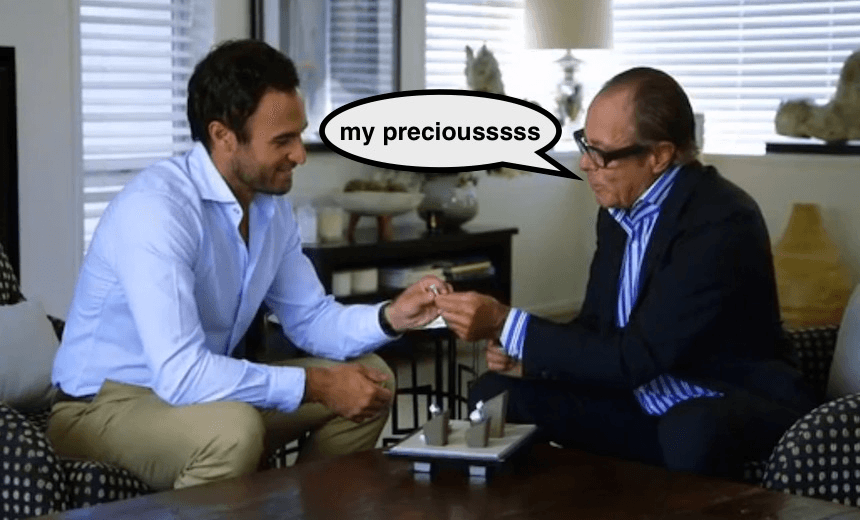 The final of The Bachelor NZ last night hardly contained the hidden gems of a Michael Hill ring, but that didn’t stop Alex Casey coming back for one last ranking.

It’s all over and I don’t really want to talk about it.

Hopped up on mini Milky Bars, sausage rolls and Lindauer, I was so ready last night to see Naz finally bring it home for the landscaping community. But things don’t always work out, and I was left making this comically tragic face in front of the television.

For our full, completely measured reactions to The Bachelor NZ, don’t hesitate to download our The Fantasy Suite podcast here on iTunes, or here on Stitcher.

Whilst I slowly repair the chambers of my heart, here are the ten greatest* moments from the grand final of season two of The Bachelor NZ.

Nothing cheers me up more on this drudgery we call life than a Nan rocking a bloody shearling jacket. Jordan’s grandma stole the show during her brief moments on screen, but ominously disappeared before Fleur came over to meet the family.

She was last seen here, eyeing up the sumptuous club sandwiches and deciding where one piece of bread ended and another began. It’s a hellish task, and no surprise she had to take the next day off to recover.

Who would have thought, through all the different Gollum impressions that season two has inexplicably produced, that the ultimate impersonator was waiting in the wings the entire time.

He’s just a man, standing in front of a man, asking him to take the one ring to rule them all. Beautiful.

Not only did Naz clearly get the superior spread of club sandwiches, croissants and pain au chocolat, she was also paid a visit by whatever the heck is going on here. Talk about a monkey on ya back mate.

Papa Mauger, putting the “ooh” into “ooh, Aragorn” since ages ago.

That moment when you realise you need to flecky the sun right into Jordan’s eyes and run away as fast as a hyena to re-join the Maasai people.

He trailed off, eyes glazing over as his head bowed for a very long sleep. A great talking head for the ages.

All of the pointers were there before the big moment, you just had to know where to look. Anyway, I’ve heard if you watch The Bachelor NZ on VHS, you get added to the hit list and struck off within seven days.

8) Jordan’s brother is a wise-cracking detective

9) Jordan’s brother is also some kind of deck gigolo

Pray for that poor boy who will be haunted by this moment for the rest of his life. No deck will ever be the same.

10) The quote that summed up the entire series

Instead of proposing, snotty crying and passionate kissing, the final pair fumbled awkwardly over which finger to put Michael Hill’s stonking big ring on. It can’t go on the ring finger obviously, that’s way too much too soon. Index? Too showy. Thumb? Too positive. Toe? Too chilled out.

Anyway, thanks for hanging out. I’ll be back if Naz ever returns for the first season of The Bachelorette NZ.

In the meantime, I’ve got a powerful ring to destroy…

Listen to The Fantasy Suite podcast below, hosted by Jane Yee and featuring Alex Casey and Duncan Greive: