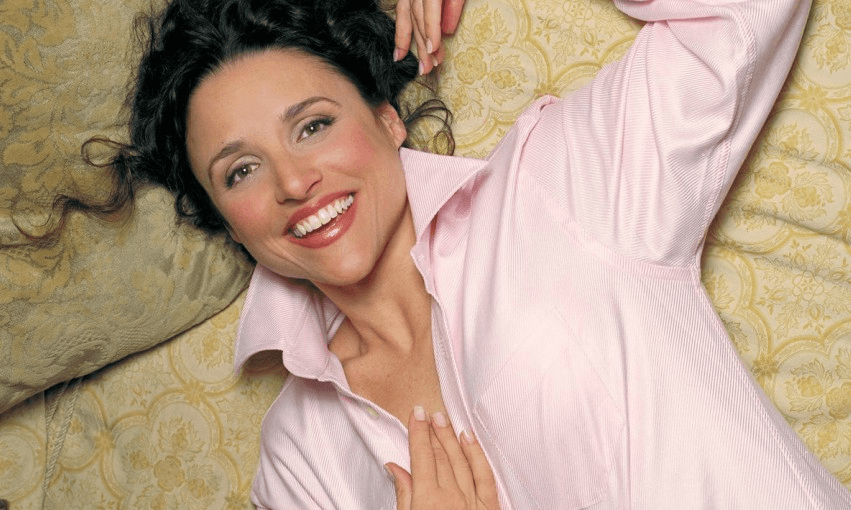 Sam Brooks uncovers Watching Ellie, a Julia Louis-Dreyfus sitcom that got buried somewhere in her illustrious career between Seinfeld and Veep.

Julia Louis-Dreyfus is an international treasure. She has three billion Emmys (fact-checked, and yes that is the correct number), she’s starred on several long-running shows and she’s managed to establish three iconic comic characters in her career – Elaine (Seinfeld), Christine (The New Adventures of Old Christine) and Selina Meyer (Veep).

And then there’s the much, much lesser-known Watching Ellie.

Watching Ellie comes from a fascinating time in both TV, and Julia Louise-Dreyfus’ career. She’d come off of the back of a show called Seinfeld, which I think nobody watched and did not win any awards. It was also the first show of any of the Seinfeld alums, so there were high expectations. (There’s an article in how Julia Louis-Dreyfus, by far the most underrated member of the Seinfeld quartet, has cleanly become the only one to really break free of those shackles, repeatedly and seemingly effortlessly, but it is not this article.)

The concept for the show is strange and fascinating, even 15 years later. Firstly, it’s told in real time, with a clock ticking down in the corner of the screen. Secondly, it’s a single-camera comedy, which is not particularly strange now, but in 2002 the closest thing to it was Monk. Remember Monk? Man, remember Tony Shalhoub? What a time 2002 was. Thirdly, it’s a show where nothing much happens – Ellie just meanders along for literally twenty-two minutes, being quite mean to people around her (which is not dissimilar from Julia Louis-Dreyfus’ other work, really).

2002 was a strange time for television. It was a time when a show could get 10 million viewers a week and not be deemed a success. Watching Ellie lasted two seasons, including a retool from single-camera (a rarity in 2002) to the more familiar three-camera sitcom. The first show from a Seinfeld alum post-Seinfeld was promptly forgotten about, along with Julia Louis-Dreyfus, until she returned with the more traditional sitcom The New Adventures of Old Christine in 2006.

There’s a lot that makes Watching Ellie a worthwhile curio – the real-time format is a fun experiment, and it’s cool to see that deployed in a comedic rather than terrorist sense (hi, 24!). It’s also a chance to see a pre-Office Steve Carrell trying out his schtick, but mostly it’s an opportunity to see Julia Louis-Dreyfus do what she does best – find the humour and the humanity in some truly monstrous people.

Dudes have been allowed to play unlikeable characters since the dawn of television – when was the last time an actor won an award for playing a character you would actually text back? – but women have seldom had that luxury. Julia Louis-Dreyfus almost exclusively seems to play these roles and she never softens the hard edges.

She dials up her characters’ destructively high self-regard and their paralyzing stubbornness to a ten, and the results are electric. There’s a reason why she wins all the awards and why people keep watching her – it’s because she makes her characters’ monstrousness so huge and so cartoonish that they feel more real as a result. We know people like that, we might even be like that ourselves.

There’s value in liking a character, but there’s even more value in knowing a character – it makes us feel seen. Julia Louis-Dreyfus, in her all work, including Watching Ellie and the very much underrated film Enough Said, doesn’t seem to care if we like a character or not. What she doesn’t care about is that we know a character, and she isn’t going to soften any of the harder, darker, human edges of it just to seem likeable. She’s too good, she’s too smart to do that.

Watching Ellie won’t be remembered as her best work, but even the minor work of a genius – and I would happily give Julia Louis-Dreyfus that title – is worth watching. It’s like seeing Picasso throw paint on a canvas mindlessly – it’s still Picasso in the end, you know?

Click below to watch the master at work in the complete seasons of Watching Ellie and Seinfeld on Lightbox: