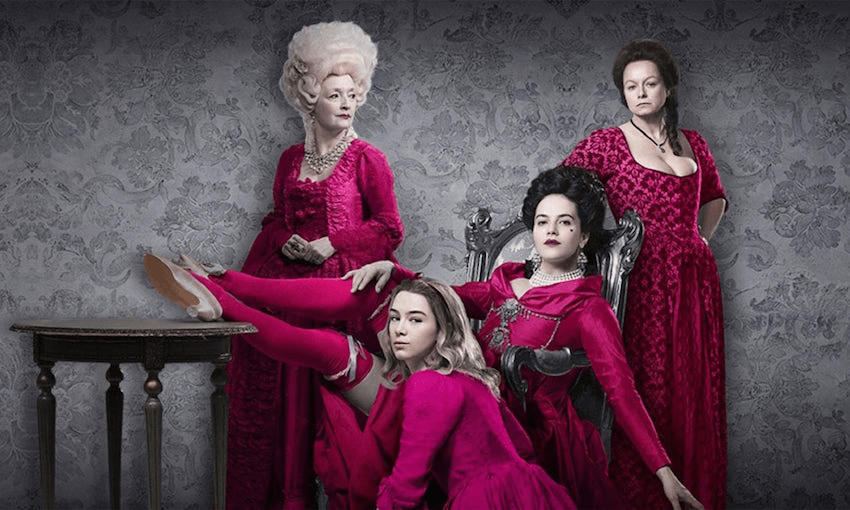 The titular Harlots, of Harlots.

Harlots: Who are these corsetted women and where do I know them from?

The titular Harlots, of Harlots.

Harlots returns to Lightbox tomorrow with a second season full of intrigue, feminism and corset-ripping good times. The show is full of famous faces, but where have you seen them before?

Who is she playing? Margaret Wells! She runs a brothel in 18th century Britain, and her brutal upbringing working in Lydia Quigley’s brothel has turned her into a ruthless madame vying for survival. She’s ambitious, she’s intelligent, and she knows how to survive. Basically, she’s your new problematic feminist idol.

Where have I seen her? If you spent the late nineties and early aughts hovering around independent cinema, and why wouldn’t you, you culturista you, then you’ll recognise her from arthouse classics Under the Skin, Jesus’ Son, Code 46 and my own personal favourite, Morvern Callar. If you’re more into the mainstream side of things, you’ll have seen her in Minority Report and as the begrudgingly sympathetic villain in Fantastic Beasts and Where To Find Them. She’s also done her dash in BBC-esque drama already, playing murderess Myra Hindley in Longford and a jewel thief in The Last Panthers.

She’s kind of a big deal, is what I’m saying.

Who is she playing? Lydia Quigley, the other brothel-runner which gives the show its title. Lydia is the more brutal one on the show, and as such she runs the more upper-class brothel.

Where have I seen her? Well, I saw her on the West End earlier this year in one of the best naturalist plays ever written, A Long Day’s Journey Into Night, playing opposite evil lion voice actor Jeremy Irons. She was funny and devastating, and I’m not a humble enough person to not bring it up at every possible opportunity.

However, you might have seen her in her Academy Award nominated performance in last year’s Phantom Thread, or in her leading sitcom role Mum (which you can watch on Lightbox), or in many Mike Leigh films, including High Hopes, Secrets & Lies, Topsy Turvy and the absolutely shattering Another Year.

Like Samantha Morton, she is also kind of a big deal.

Who is she playing? Charlotte Wells, the oldest daughter of the aforementioned Margaret. She’s not the favourite, which Margaret both implicitly and explicitly reminds her of, but she’s a rising star in the London harlot scene (which was a thing in the 18th century it seems) with her beauty, quick wit and ability to fit in with the aristocracy.

Where have I seen her? She was in a few episodes of Misfits, the truly bizarre fantasy romance film A Winter’s Tale, she’s done a few of those theatre plays nobody is talking about, but–

Oh, let’s be honest. You saw her as the young daughter who died on Downton Abbey. Let’s stop pretending and move on.

Who is she playing? One of the wackier characters on this show, Florence is a blind religious fanatic who lives in Lydia’s brothel… while preaching against Margaret’s brothel on a nightly basis. Like most people in the city of London, apparently, Lydia holds a few secrets of Florence’s, and she’s more than willing to exploit them.

Where have I seen her? Her most famous film roles have been in Mike Leigh films – turns out that guy knows how to cast good actors – including Topsy-Turvy, All or Nothing and an incredibly stunning performance in Mr. Turner. She was also in the critically acclaimed BBC drama Housewife, 49 about ten years ago, if you can remember that far back into existence.

Oh, she’s also in Call the Midwife, but nobody’s heard of that.

Who is she playing? Harriet Lennox, whose story is as tragic as Florence’s is wacky. Her common-law husband, who is also a slave-owner, dies early on in the first season, and Margaret Wells rushes in to save her from her predicament when her husband’s son tries to send her children to a plantation, because he’s a truly garbage human being.

Where have I seen her? Bennett-Warner is definitely one of the more up-and-coming members of this cast, having had guest roles on about every long-running British TV show of the last decade – including Case Histories, Miss Marple, Inspector George Gently, Doctor Who. Outside of this, she’s also a prolific and award-winning theatre actress, and she has a main role in the latest season of Silent Witness, a show which has been around since time immemorial.

Who is she playing? Lady Isabella Fitzwilliam, which is about as noble a name as you get. She has secrets, and looks like someone’s about to cash in on them.

Who is she? She’s Arwen! The elf-lady from The Lord of the Rings. She’s also the girl who you don’t wanna miss a thing for from Armageddon, and if you’re a period drama fiend, you might have already seen her in Gunpowder on Lightbox (which, fun fact, the above screenshot is from, because we’ve yet to see her in Harlots).

The second season of Harlots starts on July 12 on Lightbox, with episodes dropping every Thursday.

You can find Harlots weekly on Lightbox right here: