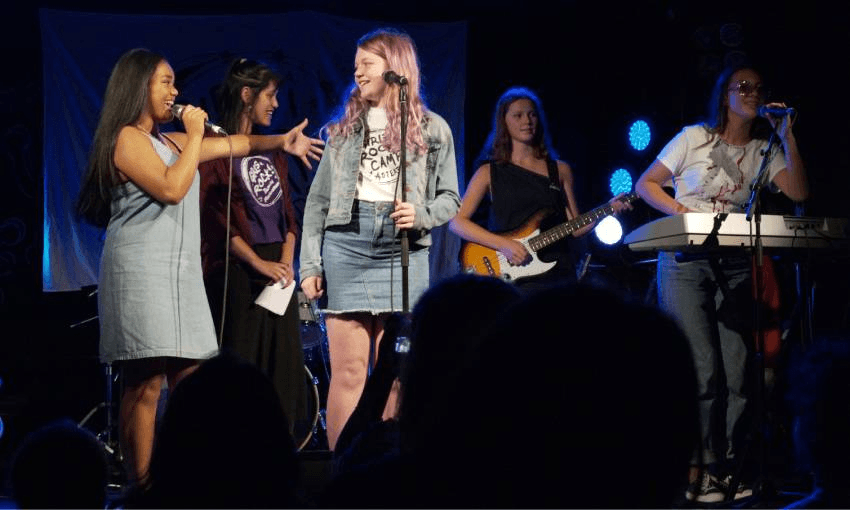 The band Melancholy at the Girls Rock! showcase. (Photo: supplied)

The band Melancholy at the Girls Rock! showcase. (Photo: supplied)

We Rock! is a Doc Edge original and made with the support of the Doc Edge Rei Foundation Film Fund.

If you have to send your kid to a camp, why not make it one that turns them into rock stars? The new documentary from Morgan Leary, We Rock!, offers an introduction to the goings-on at Girls Rock! Aotearoa.

Part of a global alliance of camps originally founded in Portland, Oregon in 2001, Girls Rock! Aotearoa is an annual rock’n’roll themed camp for girls, trans, intersex, and non-binary people between the ages of 12 and 17. The short documentary follows the campers and the camp organisers – Carb on Carb’s Nicole Gaffney and Street Chant’s Billie Rogers, plus intern and ex-camper Edie VC – as they help these talented rangatahi learn how to write songs, form a band, and perform on stage.

What soon becomes clear is that community is a vital part of building a band. Some of the campers have no experience, and others have been playing music for a while. When a bandmate messes up a chord, do you yell at them for it? No, says Gaffney. “I say, ‘you rock!'” They’re all placed into six-person bands based on which instruments they prefer, and Gaffney and Rogers try to arrange them so they make new friends instead of playing it safe with old ones.

The campers spend the week watching local bands perform, writing their first song, and practising with their new band. The documentary gives us a glimpse into the final showcase, where the range of talent and style is incredible.

“We try to make it as far away from school as possible,” says Rogers. “It’s not like school.”

Young women are often told not to make noise or take up space, and Girls Rock! is the antithesis of this. The teens jump, clap, yell and spread out over a stage. They’re making a lot of noises: soft harmonies, harsh yowls, hard drums, quiet, building bass, and – of course – a range of guitar twangs. We see the bands grow close throughout the week, and cheer each other on at the Tuning Fork.

The 13-minute documentary was directed by Leary and produced by herself and Morgan Leigh Stewart, a duo also known as “Morgan and Morgan”. The pair also worked together on the 2019 Loading Docs short film Bird’s Eye.

Doc Edge Forum Online is an industry conference of seminars, panel discussions, masterclasses and networking opportunities held between May 27-31. Find out more at docedge.nz/industry/forum-2021/