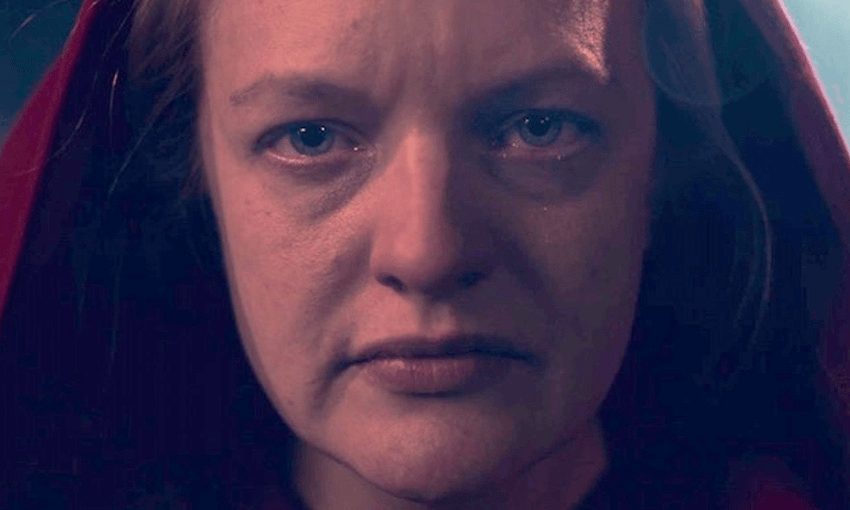 The Handmaid’s Tale recap: Bustin’ out all over

We’ve come to the end of the dystopian conservative marathon that is the second season of The Handmaid’s Tale – and oh my god what have you done, June! Tara Ward recaps.

For the love of all things red and capey, why did you not get in the truck?

It was the last few minutes of the season two finale of The Handmaid’s Tale, and things were about to explode. A secret underground network of Marthas had helped June and Holly escape from the Waterfords. June had met up with Emily and together they were seconds away from hitching a ride to freedom. This was it. All June had to do was get in the truck.

June did not get in the truck.

Instead, she gave her baby to Emily. “Call her Nicole,” June said, while I started throwing things at my screen. Call her Justin fecking Bieber for all I care, just get in the truck! The door slammed shut, the freedomobile drove away, and June ended season two as she began it: alone, and on the run. Also, with a very clenched jaw.

Clenched jaw, clenched butt cheeks, everything was clenched during this extended season finale. It was sixty nerve wracking minutes of the best nail-biting, knife in the back, finger amputating, fall down the stairs drama that we expect from this beautiful nightmare of a show.  It was equally heart lifting and heart wrenching. I am wrecked, and yet, I want more.

RIP me, RIP Aunt Lydia. She broke the golden rule: never push thy traumatised handmaid too far, or thy will suffer a steak knife in thy back.  Emily finally snapped in the face of Aunt Lydia’s sustained cruelty, and as far as dystopian stabbings and stairway kickings go, this was a good ‘un. No amount of bran muffins would help Aunt Lydia now. We left her lying in a pool of blood on Commander Lawrence’s floor, bleeding from the mouth and moaning for help.

We also bade farewell to Serena’s pinky finger, cut off as punishment for reading in public. Serena could’ve been lying on a beach in Hawaii, smoking cigarettes with all her fingers and having sextuplets with that fertile government official, but no. She had Wives to politicise, because Eden’s killing proved that her own daughter wasn’t safe in a world that praises parents who condemn their child to death.

Serena mobilised the Wives to appear before the parliament, asking for the children of Gilead to be allowed to read the Bible.  She was one severed finger away from success, but reading God’s word did sweet FA for Eden and it did nothing to help Serena. When Serena caught June escaping with baby Holly, she knew her daughter needed to grow up in a place where kids can read whatever the heck they want. Even Sweet Valley High books are probably okay in Canada. Praise be.

At least Serena didn’t lose her middle finger, so she can still pull the bird on Waterford the next time he acts like bin juice. “We’ve had a difficult day,” the Commander said, as he tried to placate Serena after the whole ‘my husband cut my finger off’ debacle. He also suggested June stay at the Waterford’s so they could bless Gilead with more fruit from his loins, and promised he’d let her see Hannah again. “Go fuck yourself, Fred,” June replied. Indeed.

Thankfully, there was another community of women in Gilead who knew how to get shit done. The Marthas were the hero of the hour, rising up to send June and Holly along their secret underground railroad to freedom.  One by one, Marthas of all ages and races called June’s name from the darkness, silently leading June and Holly past the pools and tennis courts of the Gilead rich, over fences and through gardens, before leaving them to wait beside a tunnel.

There was light at the end of that tunnel. This was the moment. This was our reward for enduring two horrific, incredible, astonishing seasons of television.

It was too good to be true.

I’ve watched this eleven times in the hope there’d be an alternate ending, but there isn’t. June made her choice. She gave Holly to Emily and turned her back on freedom for Hannah.

You can take the baby out of Gilead, but you can’t take the handmaid who really doesn’t know when to do herself a favour. It was infuriating, but it was bloody compelling television. May the Lord open a can of whoop-ass for June, because Rita is going to be fuming when she hears about this. June better burn Gilead to the ground next season, but until then: don’t let the bastards grind you down.

You can watch the entirety of The Handmaid’s Tale right here: