Looking to buy a unit or apartment? You might need to think twice or even three times, if this Prime documentary is anything to go by, writes Jacqueline Paul.

If you are hoping to buy a home built between the late 1980s and the mid-2000s, there is a significant risk that it may be a leaky building. A Living Hell: Apartment Disasters spills the tea on who is responsible for designing and building such shitty housing in Aotearoa (spoilers: it’s a lot of companies). If it achieves anything, it’ll hopefully make you think twice before putting your money down, whether for a standalone house or an apartment. As leaky apartment owner Olivia Goudie remarks ruefully at the end of the programme: “Personally, I would never buy an apartment or unit ever again.”

A Living Hell: Apartment Disasters, which aired on Prime this week and is available to watch on demand, investigates the dire state of many apartment complexes across New Zealand. This is a show that many aspiring and first home buyers would do well to watch. Though, be warned, if buying during a housing crisis already has you anxious you’ll have even more sleepless nights after watching this.

New Zealand is one of the most unaffordable housing markets in the world, and REINZ reported in March 2021 that the median house price in New Zealand reached $780,000. The Demographia International Housing Affordability 2021 survey recognised that New Zealand housing affordability has deteriorated significantly, with the cost of a median house now seven times the median income – compared to Australia at six and the United States at four. New Zealand incomes remain low, and house prices will continue to rise.

But do you actually know what you are buying? Don’t be fooled by the sky-high costs. Wait till you see the quality of builds in A Living Hell: Apartment Disasters. 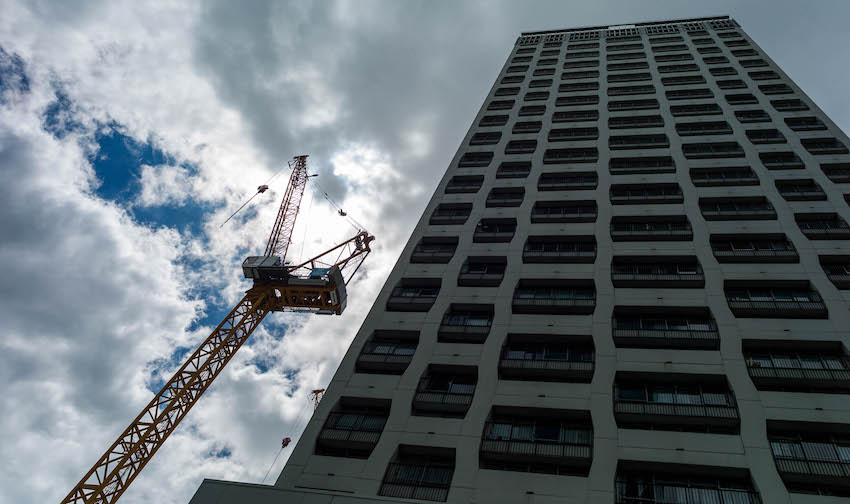 One of the buildings that is put under the microscope in Living Hell. (Photo: Sky)

One of the leaky buildings featured is the St Luke’s Garden Apartments in Auckland. The sprawling 285 unit complex was built between 2003 and 2011, making it a relatively new building to be affected by weather-tightness issues. The problems facing residents there are vast. Bevan Tse bought an apartment there in 2013; by the time he realised his mistake it was too late. He and his family have gone into debt to cover their share of the costs of remediation, estimated to be in excess of $100 million.

In Wellington, the Sirocco apartments are in a similar shape. Systemic issues and leaky problems are projected to result in a repair bill of $26 million, and many owners have sold at a considerable loss. The effects aren’t just financial, but emotionally scarring too; bodycorp chair Sudhir Motwani notes that he’s been racially abused multiple times as he tries to find a solution to the massive challenge all Sirocco apartment owners face.

The documentary has two key takeaways. The first is the severe issues with monitoring and regulatory standards of construction in New Zealand. If construction, regulatory and monitoring issues are not addressed, there will be further challenges in the housing system. Given the ongoing shift towards denser cities and the increase of people living in urban centres, this is an urgent problem to fix. We need structurally sound, good quality medium to high-density apartments in urban centres instead of sprawling cities and standalone dwellings.

The second is the legal framework and governance matters of apartment complexes. It’s likely that many people still do not know what they are buying when it comes to apartment buildings. When you buy a unit title to an apartment, you usually become a member of the body corporate, consisting of all that building’s owners. Many owners don’t understand the complex nature of governance and management of apartment complexes, nor the likelihood that the bodycorp relationship can become antagonistic and dysfunctional.

At the Sirocco apartments, the body corporate fee for a recently sold apartment is $7,950.51 per year. But where should this money go, and who is entitled to a share? As one former Sirocco owner recalls in the documentary, a dispute broke out between apartment owners with balconies and some of those whose apartments were balcony-free: those without them complained they shouldn’t have to pay for damage to balconies they did not own. The problems with the owner/bodycorp relationship go far beyond the leaky building issue, and that’s something Nicola Willis’ Unit Titles (Strengthening Body Corporate Governance and Other Matters) Amendment Bill is trying to address. Submissions are open until 29 April and I strongly encourage you to submit if you are experiencing significant issues with your body corporate.

One issue I have with A Living Hell is that it approaches the issue from a very Pākehā perspective, engaging in the typical dialogue that housing is primarily investment asset. It would have been great to include a broader range of experiences from young people and larger families of ethnic backgrounds to shine a light on other living dynamics in apartments. The rhetoric around the housing crisis continues to be dominated by economic and political concerns and it would be valuable if the documentary had explored cultural inequities such as dwelling types and health and wellbeing impacts.

You’ll come away from A Living Hell: Apartment Disasters better informed about the leaky building issue, but it may not provide you with the security you hoped for. As long as developers and builders are focused on profit more than people, you’ll need to do your research and seek further expertise before buying any home. Do your due diligence. My advice: don’t buy into the hype and make sure you know what you are buying, warts and all.

A Living Hell: Housing Disasters is available to watch on SkyGo and PrimeTV here.

Jacqueline Paul is a researcher at Ngā Wai a Te Tūi Māori and Indigenous Research Centre, and lecturer at the School of Architecture in Landscape Architecture at Unitec Institute of Technology. She is currently based in the United Kingdom to pursue a Master of Philosophy in Planning, Growth and Regeneration in the Department of Land Economy at the University of Cambridge.