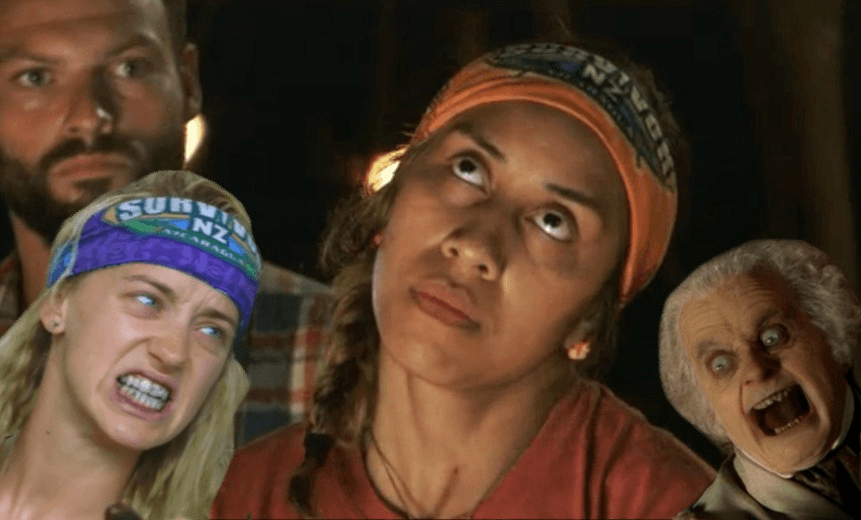 Survivor Power Rankings – One eye roll to rule them all

HIGHLIGHTS OF THE WEEK

Buzzy that after all these years, I think this is the first time I’ve seen Survivors wearing jandals!

Challenges where they have to smash ceramic tiles with rocks are ALWAYS cool. The sound when they smash one is maybe my all-time Survivor erogenous zone. More please.

Speaking of challenges, it’s crazy how much the contestants care about challenges on Survivor NZ! A refreshing change from the US version where they basically skip over most challenges because they don’t really matter as much as idol-finding and stuff.

I need to address the Survivor fanbase. We all know the way they’re folding votes is insane. But you need to stop posting things like ‘fix it next time harumph harumph!’ because they obviously filmed this stuff ages ago. We’re just going to have to put on our big girl panties and deal with it.

More importantly, the editing in episode two this week was silly and lead to the most predictable boot of our times. It was like: ‘hmm, nobody has even come close to mentioning Izzy as a potential vote-getter for 99 years. Oh wait, now there’s 15 mins left and everybody’s talking up an Izzy-storm. I wonder who is gonna go home…’ Not ideal.

Still the Tom vs Shay feud lives on, which can only be good. Onto the rankings.

The book of (this) Mormon may be have been destroyed, but Shay’s game is still looking good. Tony may be endlessly blustering about her betrayal, and Tommy may be singing songs of her sinister ways to anyone who will listen, but Shay is calling the shots and ruling the roost.

Also she done this:

I’d give anything for a cool/funny screenshot of Shannon, but alas, she just spends her screen-time owning everyone else and being a cool as hell Survivor master.

Not much to say about the above, other than it’s probably evidence that Avi hasn’t made it on to Jak’s crap-o-meter yet either.

Avi’s game is ticking along nicely. He’s got ins on both sides of his tribal alliances, and he’s managed to keep his love affair with Mr. Tom alive against all odds. My main question about Avi is, why do all of his confessionals sound like they are being delivered by Siri the iPhone robot?

How good is Sala!? Above he’s manufactured some kind of glorious McCahon landscape feat 2x nekkid MallowPuffs instead of weird old bible writing. He’s single-handedly doing more for the causal integration of te reo Māori than the current Ministry of Education.

That scene about his daughter was b-e-a-utiful. He has his whole tribe on TV singing happy birthday in Samoan! Has that ever happened on mainstream telly??

He’s a naturally gifted Survivor player in that everybody loves him. Now if only he could get past all the anti-game hoorah loyalty stuff.

Aside from being outed by Jak as the absolute poo-meister general of the season, Georgia is basically rocking out. She’s got the ear of the game’s tightest alliance and strutted her stuff in the challenge. I’m loving Georgia. Even though this:

Thomas of Arabia took his sun smart obsession to dangerous new levels this week. Everyone seems to recognise him as a major threat, even though we haven’t seen much to indicate why, yet somehow Tom lives on. You give this fella an inch and he takes a mile. Good on ya.

Apart from the fact that he’s seemingly doing a class word study on the term “stand-offish”, I don’t have too much to say about Tommy. He’s getting a nice groundswell of attention that will probably pay dividends later on. Keep your eyes peeled.

Is Nate good? Is he bad? It’s really hard to tell. He’s definitely up against it. But then again, so is a humble small-town cop looking to go viral in a world full of Fail Army contenders and skateboard trickers. And we all know how that story ends. Keep hope alive Nate.

Another dude I cannot get a handle on. He say’s he’s pretending to be dumb. If that’s true, keeping a tally of how many poos your tribe mates have done and loudly announcing the totals is a pretty good “fake dumb” move.

The only thing we know for sure about Jak is that his Survivor style is extremely Gomer Pyle.

Why are so many people crying on this season? Of all the ways in which New Zealand might have changed the Survivor game, who would have thought it would be via our powerful emotional depth? Anyway, Lou is doing fine.

Mike aka Cap’n Mike Sparrow aka Michael J. Gatsby obviously didn’t get last week’s memo that every day is Casual Friday on Survivor NZ. He’s a part of the tightest wee bunch in the game, but I wouldn’t be amazed to see this fella ditched swiftly after a Pagonging.

Still, Mike worked his ass off in the challenges and is maintaining his partnerships via bro-downs and tender flirtations. For sure, Mike beat on, back against the current, borne back ceaselessly into the backseat of a four person alliance.

Was Lee even out there this week?

With Tony, you gotta take the good with the bad. On the one hand, his head is a perfect IRL translation of an Al Nisbett caricature of a rugby player.

On the other, he may become the first ever New Zealander to murder people on telly. All I’m saying is, his Facebook profile picture is the guy in Reservoir Dogs who cuts off a fellas ear!

We get it mate. His backstabbing speech was pure hell but who cares, because Tony was also the source of pure joy this week when he busted out a fricken Dragon Slayer move!

The only explanation for this is that Tony obviously watched Survivor Tocantins/Heroes vs Villains/ South Pacific and came away thinking Coach is the Survivor G.O.A.T! Heady stuff.

Gutted. In a way, Hannah is right in her gripes that she didn’t get a fair shake. But Survivor has never claimed to be fair. It’s a badass game where badasses partake in orderly democratic ownage of each other.

Survivor NZ airs on TVNZ 2 Sundays at 7pm and Mondays at 7.30pm