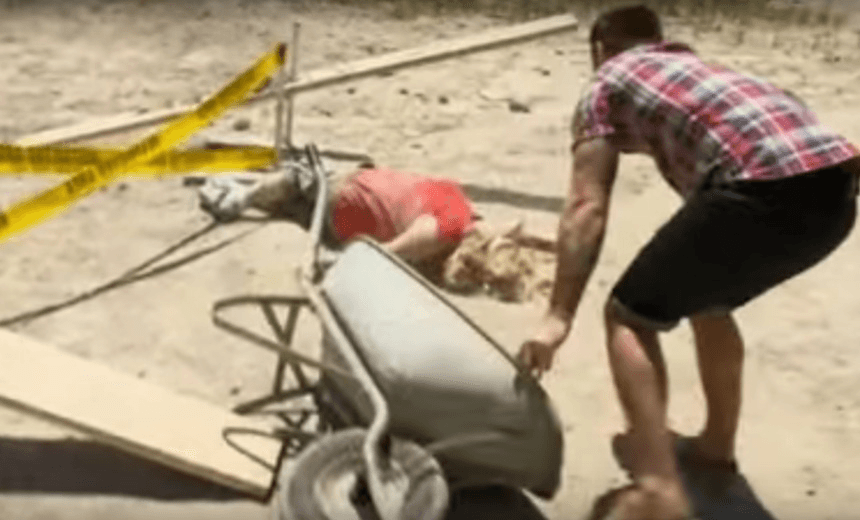 The curse of the Our First Home wheelbarrow

After witnessing two near tragedies in as many seasons of Our First Home, Madeleine Chapman has found the common cause.

Our First Home is the tamest and safest reality show on television. Or so we thought. With the show’s second season coming to an end, Our First Home has seen two near tragedies play out on our television screens. I was left with two questions: “how did this happen?” and “who is to blame?”

After many sleepless nights and countless replays of the offending incidents, I have found the culprit. Now that the auctions are currently underway and the three families are out of their work clothes, it is finally safe to expose the perpetrator of these horrific “accidents”.

In season one, the wheelbarrow made its presence felt in a big way. Contestant Robyn Schreuder was competing in a concrete dash task that involved pushing said wheelbarrow across a see-saw. How this was allowed on the show, I don’t know, but what inevitably happened was shocking and entirely the wheelbarrow’s doing.

This understandably brought about a wheelbarrow wariness and season two has shown a distinct lack of wheel-centric challenges. This didn’t stop the wheelbarrow though. While performing a routine window closure, there was a sudden crash and Theresa of team Wotton shouted “I need a towel, quickly.” Turns out the towel was needed to staunch the bleeding from her chest – which now had a giant piece of glass sticking out of it. A freak accident if ever I saw one.

Coincidence? I think not. It’s still got concrete on it from the last attack. The nerve.

If TVNZ decides to continue with Our First Home, some serious changes must be made before shooting begins on a third season. First off, no wheelbarrows. Want to move some mulch? Grab some empty paint buckets and get to work. We simply cannot allow the wheelbarrow to bring down its third victim. Also, be very careful before casting a mother with bouffy hair, because they are clearly the targets of these senseless attacks.

Are we as a nation simply going to step aside and watch as this evil, calculating tool wreaks havoc on the poor mothers of Our First Home? No. I say to hell with wheels. We didn’t come this far on our two feet to be brought down by a lone wheel. Stand up, New Zealand. Stand up and lay your barrow down.

Our First Home airs Sun-Tues at 7.30pm on TV One