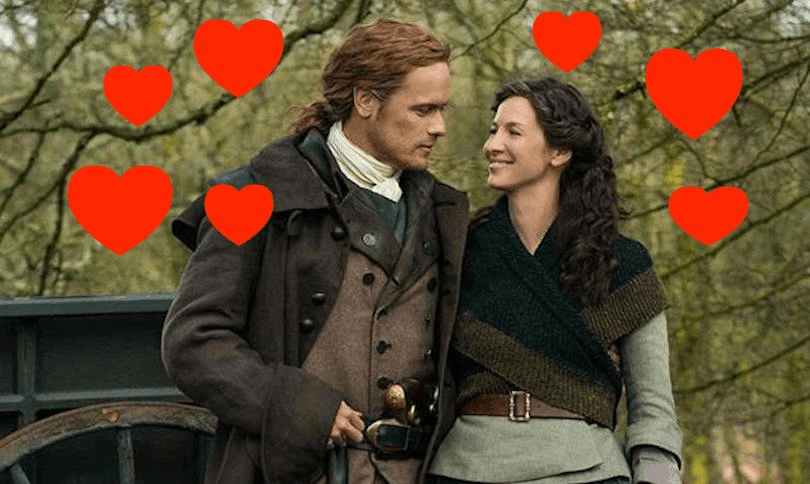 The mystery of Jamie Fraser’s wig: a special Outlander investigation

Yesterday Starz released a promo photo for Season 5 of Outlander, and the world shifted on its axis. And breaking news: Jamie Fraser’s wig is finally perfect, writes Tara Ward.

We’re crossing live to the 18th Century, where Outlander hero Jamie Fraser has been survived some terrible things. He has loved and lost. He’s been battered and broken. He’s been tortured, teased and mistreated, and so has his hair.

At best, Jamie Fraser’s hair is a flowing waterfall of butterscotch ringlets that makes your heart beat faster than the time Roger escaped the Idiot Hut. At worst, it’s a fuzzy nightmare from which we’ll never wake. Jamie’s golden locks have been twisted, plaited, curled and fringed to within an inch of their life, but at last, those tumultuous days look to be behind us.

Season 5 of Outlander has started filming, and it has delivered us at the pearly gates of hair heaven. I mean, just look at it. LOOK AT IT.

It’s as if Starz heard our prayers, and sent that wonky Fraser fringe wig through the stones forever. Jamie’s new wig has more perfect waves than the Jamaican beach Claire was shipwrecked on, and a reddish tinge softer than an autumnal sunrise over a field of wild Fraser Ridge strawberries. I want to crawl into it and sleep forever. It is delicious. It is nature at its finest.

Of course, there’s more to Jamie Fraser than just his hair. I mean, the man built a log cabin in approximately 45 minutes, he’s a freaking superhero. But after watching over 55 episodes of Outlander and having spent 55 years of my life discussing those 55 episodes with 55,000 strangers on the internet, I’m 100% convinced Jamie Fraser’s beloved ginger mop is a window into his soul.

Stay with me, Outlander lovers, for the evidence is clear. When Jamie’s been in turmoil, his hair has been a mess. When life is going well, it’s a golden oasis of soft, hairy goodness. Every triumph, every tragedy – from the time his donkey went missing to the moment his daughter appeared from the future – has physically manifested itself through Jamie Fraser’s hair.

Every hairstyle tells a story, and Jamie Fraser has enough to write a novel.

Wait, that already happened, it’s called Outlander. Let’s get up close and personal to Jamie Fraser’s legendary locks, so we can relive the highs and lows of his emotional Outlander journey through the many, many stages of the finest set of follicles Scotland ever lay its eyes on.

This simple, no frills hairstyle belongs to a more carefree Jamie, with a ‘wash and go’ style that’s super handy for that last minute cattle rustle. Jamie’s hair was as low maintenance as he was, because he hadn’t yet hooked up with the mysterious woman from the future who probably used her powers of sorcery to make his hair grow like a weed.

Marry me, Jamie Fraser wedding hair, because this was a bloody good hair day. I don’t know how you score an 18thcentury blow-wave in the middle of the Scottish Highlands, but Jamie pulled it off, and when he said “it was like the sun came out,” he was obviously referring to his magnificent mop. That hair was full of body and bounce and so was the honeymoon, and I am here/hair for every minute of it.

Very continental. It’s a style that reeks of Jamie’s inner turmoil, as those curls shout “I’m trying to  be someone I’m not by secretly spying on the King of France”, but also, “I’m just a regular bloke, trying to grow my hair out”. No wonder Season 2 was so intense.

Business at the front, party at the back. A conflicted hairstyle for a conflicted man, who on one hand wants wants to change the future, but also wants to visit French brothels and tell everyone about the time Bonnie Prince Charlie was bitten by a monkey. Also, if you say ‘mullet’ with a French accent, it sounds way cooler.

This was a dark time, mostly because Jamie lived in a cave. Cave life was dank and possibly quite oily, and things were so grim that Jamie couldn’t even be arsed tying his hair in a cheeky man-bun or a messy French plait. Shit, let’s not mention France again.

It’s flat, it’s lifeless, it’s all a bit wonky, much like Jamie’s life without Claire.

It’s no accident that Jamie’s hair perked up when Claire returned to the 18th century. Jamie’s happiest when he’s at Lallybroch with Claire, and it shows in his incredible hair. Home of a thousand potatoes, home of a thousand perfect curls. Coincidence? I think not.

Even Jamie’s hair was panicking when Claire discovered he’d secretly married another woman.

It’s 1768 and Jamie Fraser has it all. He’s older and wiser, with a confidence and dignity that exudes from every single follicle. This hair says, I found my wife, I found my family, I found my donkey. I eat mashed potatoes all day and I hunt bees in my spare time. This is what hairy happiness looks like, and the sooner we get our beady little eyes on Season 5, the better.