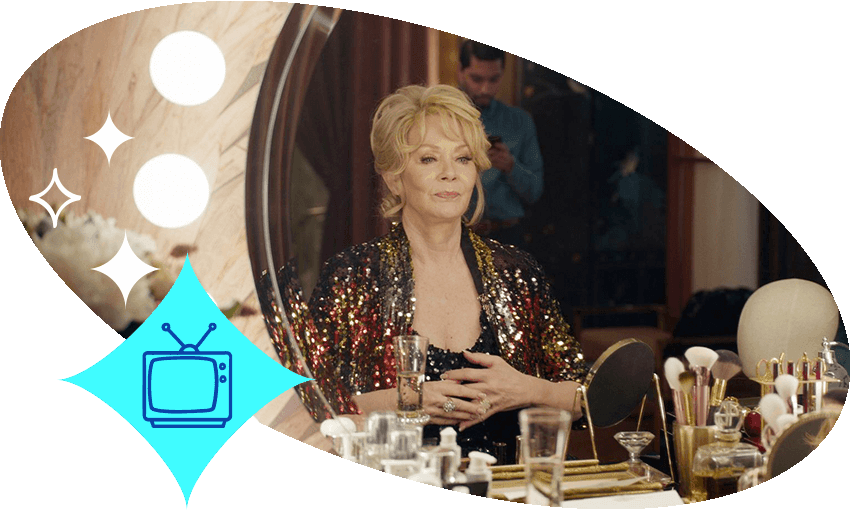 Jean Smart stars as a fiery comic paired with a much younger assistant in Hacks. Image: Archi Banal

A plea to local streaming services: where the hell is Hacks?

Jean Smart stars as a fiery comic paired with a much younger assistant in Hacks. Image: Archi Banal

New Zealand viewers are still missing out on some of last year’s most acclaimed TV shows, including the must-see series Hacks. Why?

In its end-of-year wrap of the best TV shows of 2021, the Los Angeles Times chose a “deeply hilarious and poignant” series to top its list. Hacks, an HBO Max show, stars Jean Smart as an ageing stand-up comic and Hannah Einbinder as her new, much younger, writing partner. For 10 episodes, they clash viciously, and hilariously.

Hacks was released way back in May of 2021, and my eyes lit up as soon as I heard about it. Smart, 70, is undergoing a third-wave career renaissance after her star turn as Kate Winslet’s craggy, Fruit Ninja-crushing mother in Mare of Easttown. She’s on a roll, and Hacks sounds like it will become her defining moment.

I mean, just look at this trailer. I must have watched it at least five times now. You should too. Hacks was made for Smart to thrive.

Reviews make it sound like the real deal. Praise has been near universal. Esquire calls it “sheer brilliance” and Decider describes it as  TV that is “as good as it gets”. It is, according to the Pittsburgh Tribune-Review, “easily the funniest new TV-streaming comedy of the year”.

Sounds great, right? Yet, seven months on from Hacks’ debut, New Zealand audiences haven’t been able to see it. Sky TV, the biggest local streamer of HBO shows, told The Spinoff it has “no plans to pick up Hacks”. Other services haven’t shown any sign of streaming it either. Meanwhile, a second series has been commissioned, and is in production now.

I’ve been waiting seven months, and I’m likely to be waiting a lot longer.

That’s not the only massively acclaimed show of 2021 New Zealand viewers are missing out on. In The North Water, Colin Farrell packs on the pounds to play psychotic whaler Henry Drax on a doomed 1859 shipping expedition that explores all forms of male aggression, brutality and destruction.

Filmed in the chilly Arctic waters, The North Water has also been highly praised, with one reviewer calling it “visceral, barbaric and unrelenting” which is enough for me to sign on, always. When The Guardian asked how filming went, Farrell replied: “I’ll never forget the relief I felt that nobody died.”

Sounds good! Looks intense! You should watch this trailer! Make sure the kids are in another room!

Again, I’m sorry to report, you can’t watch it. No one is streaming it, legally, in New Zealand. When writers at the BBC called The North Water “the best TV series you missed in 2021” they don’t know how right they are.

It’s the same story for How to With John Wilson. Praised among the most original shows to emerge over the past two years, Wilson uses footage shot on the streets around his home in New York to capture bizarre moments and incredible characters to spin universal yarns about life, love and beyond.

In one episode, he explores the joy of scaffolding — and it’s delightful. In another, Wilson meets a man who has designed his own foreskin restoration machine, and is only too happy to show him how to use it. That one is not so delightful, but it’s still a hell of a lot of fun.

How To … is for fans of Nathan For You and if you don’t know what I’m talking about, you’re really missing out on the best TV ever made.

Either way, watch this trailer and prepare to fall in love.

Now you’re in love, prepare to fall out of love. Cue the tiny violins: you can’t watch either of How to With John Wilson’s two seasons in New Zealand.

In an age where you can easily blow $100 a month on streaming services, from Netflix to Neon, Apple TV+  to Amazon Prime Video, and Spark Sport to Disney+, it seems faintly ridiculous that we’re still missing out on some of the year’s biggest, most-praised shows. Am I a spoilt brat complaining about all this? Probably. But I’m going to anyway.

Others feel the same way. On a recent morning, one of the first back in the office following the Christmas holidays, I asked my Spinoff colleagues if they knew of any other TV shows that weren’t available on streaming services that probably should be.

The answers landed like a deluge. Star Trek Discovery was removed from Netflix ahead of the overseas launch of the Paramount+ streaming service, which didn’t arrive in New Zealand in August as planned. The Other Two, a two-season comedy about the siblings of a Justin Bieber-type superstar, isn’t available. The fifth and final season of Search Party hasn’t landed. The Bureau, a five-season French spy drama that everyone overseas seemed to be bingeing during various lockdowns last year, isn’t here.

Someone else wants to watch the latest season of Survivor, and that person is me. I love Jeff Probst. I love social manipulation and gossip. I love seeing starving people participating in elaborate physical challenges all for a bite of pizza. Survivor is the shit.

That’s not all: an entire generation of British TV also isn’t available: Stath Lets Flats, This Country, People Just Do Nothing, Ghosts, Inside No. 9, The Great British Bake Off and Toast of London are all AWOL. Landscapers, an acclaimed muder-mystery starring Olivia Coleman, is screening on Sky Go and SoHo, but is not available for streaming. The list goes on and on.

So, to all local streaming services, consider this your warning, a cut-out-and-keep TV shopping list for 2022. We’re all patiently waiting, wondering what the hell you’re up to. Start with Hacks first, then hopefully the others will soon follow. Don’t make me set Colin Farrell’s Henry Drax on you. Who knows what he’ll do, but it won’t be pretty.