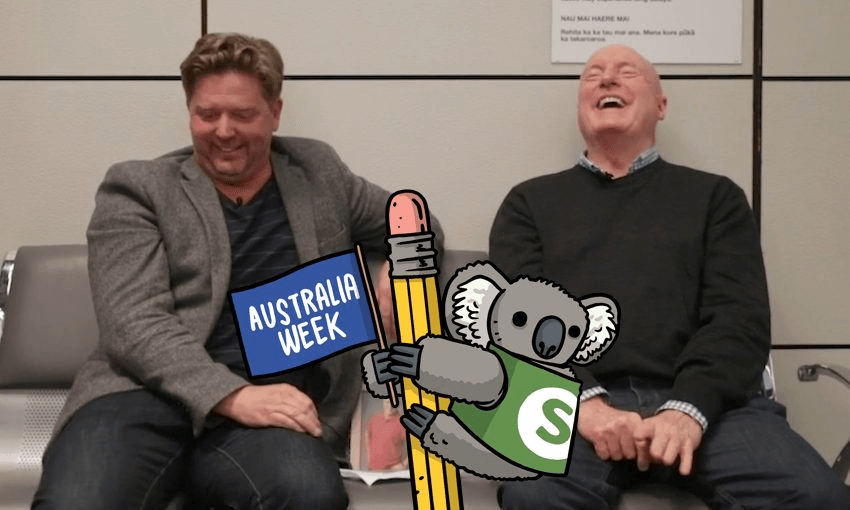 Australia Week: What happens when you get two trans-Tasman soap immortals together in the same room? We found out in 2016.

Inside is a labyrinth of offices navigable by cast photos of every show that’s ever been produced at the studio. Turn left at Outrageous Fortune, hang a right at New Zealand Idol season one, then go down the stairs when you see the original cast of Go Girls. That’s where Alf met Chris.

Meagher began a detailed history of the Home and Away dressing room situation, 1988-2016. “I’ve got one,” Galvin bragged. “Well, I share it with two other guys. How much annual leave do you get?”

“Whatever happened to just flipping on the fluoros and saying ‘action’?” Meagher wondered out loud as a couple of harried technicians fiddled with the lights. Galvin held up the list of questions we provided as a guide for the interview. “I don’t want it to look like these are my questions,” he said.

For exactly 15 minutes a former hospital CEO and a former caravan park owner compared their weird double lives. They reminisced about the old days and long-forgotten characters who went to the dairy and never came back, and speculated about how their own characters will one day die (“This is a terrible question,” Galvin warned before asking, “you don’t have to answer it”).

They may come from different worlds, but Chris Warner and Alf Stewart get on like a house on fire. In all but one of the photos on my phone, Chris Warner is in the middle of some wild gesticulation, his mouth open and his hands all blurred. In the one where he’s not, Alf Stewart’s eyes are closed, and his head is tilted back in laughter.