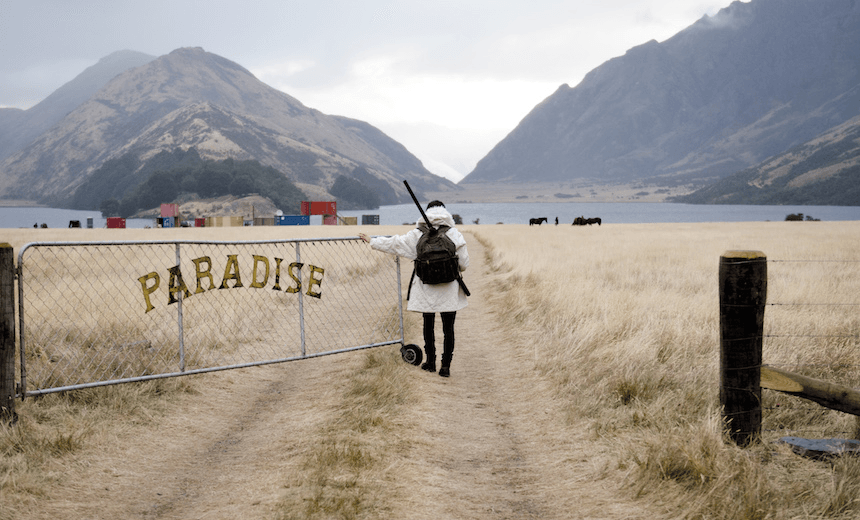 Alex Casey explains why you should make Top of the Lake your gloomy weekend binge-watch.

Here’s the truth: we should all be screaming about Jane Campion’s masterpiece Top of the Lake all day everyday, because it’s some of the best television to come out of New Zealand ever (apart from this and maybe also this).

Filmed entirely in Queenstown and Glenorchy, the series follows the disappearance of Tui Mitcham, a 12 year old who goes missing from a sleepy, chilly town – and she’s five months pregnant. Detective Robin Griffin (Mad Men‘s Elisabeth Moss) jumps on the case, searching for answers in a murky community run entirely by men.

If you like Broadchurch, Twin Peaks, The Kettering Incident, True Detective (hmm, season one and NOT two) or anything Scandi-Noir – you have to dip your toes into into the icy waters of Top of the Lake. Here are some more reasons why it should be your gloomy weekend binge:

AS MICHAEL MURPHY WOULD SAY, IT’S SO DAMN BEAUTIFUL

Not only behind the scenes – with New Zealand’s Jane Campion directing and Philippa Campbell producing – but Top of the Lake also pushes women and their experiences out of the shadows onscreen. Whether it’s the horrific trauma of sexual assault and abuse, or the subtleties of dealing with almost imperceptibly casual sexism, or life on an all-women commune, there’s no mistake whose stories Top of the Lake wants to tell.

IT’S PURE TELLY OF THE UNEASE…

Word of warning: Top of the Lake isn’t an easy watch. There is death and badness lurking under every mossy stone and inside every misty valley. Over the six incredible episodes, you will feel like you are being sucked down into a tar pit of dread. Even Sam Neill will tell you that slow-burning anxiety is what we’ve always done best, so just try to embrace the abyss.

…BUT IT’S OKAY BECAUSE THERE’S ALSO A SMALL DOG

Seriously, embrace the cuteness while it lasts, for dogs do nay always have a great time in Top of the Lake.

YOU CAN PLAY A WHOLESOME GAME OF ANTIPODEAN ACTOR BINGO

Madeleine Sami from Super City is there! Lucy Lawless from Xena is there! Jay Ryan from Neighbours is there! Robyn Malcolm from everything is there – and she’s playing a woman in a trucker hat who may or may not be in love with a chimp! David Wenham from Lion is there! Darren Gilshenan from No Activity, Australia’s funniest show is there! More local celebs than Ponsonby Countdown on a Saturday morning imo.

Yes, I’m still reeling that she is a Scientologist. Yes, I can’t stop looking at old photos of her and Fred Armisen on the red carpet. Yes, as I said many moons ago, she still holds the title of greatest ‘Kiwi who has spent some time in Australia accent’ ever committed to the screen.

I haven’t had a haircut in well over a year and I have Holly Hunter’s hairspiration to thank. The enigmatic leader of the container-ship commune plonked in the middle of Paradise, GJ glides around in various states of consciousness. There’s one thing that GJ never sleeps on though, and that’s fashion. Get ye some earthy-toned shirts and tailored high-waisted pants ASAP.

AND JUST LOOK AT THESE OPENING CREDITS FFS

Click below to watch Top of the Lake on Lightbox: