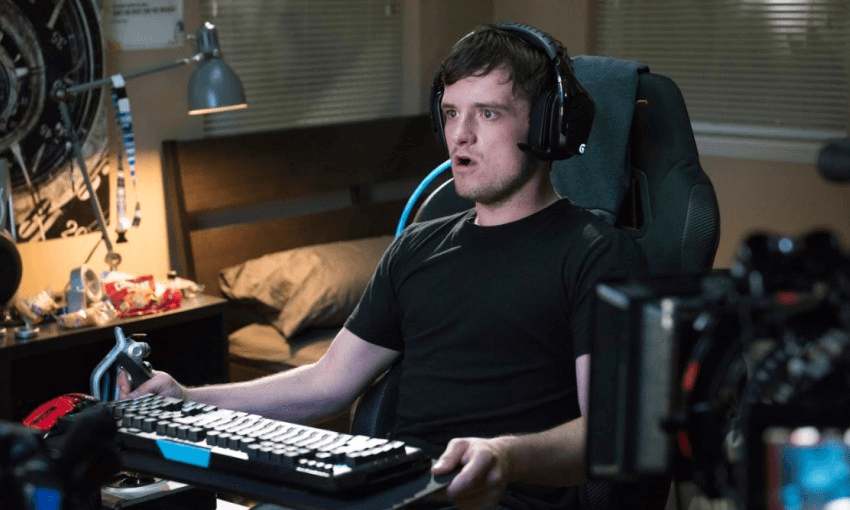 If you look at pop culture (and the real world) at the moment, there are a lot of people trying to flee their grim reality for something a little more adventurous. Take the new trailer for Steven Spielberg’s Ready Player One, where a kid becomes a part of a game, or Jumanji, where some kids also become a part of game. Then there is Future Man, a sci-fi comedy series that follows a lowly janitor (Josh Hutcherson, The Hunger Games) who is enlisted by his favourite video game characters to help save the human race from a real-world threat.

From the creators of supermarket sexfest Sausage Party, and with Seth Rogen and Evan Goldberg (Superbad, This Is the End) in the executive producer chairs, Future Man combines all the best elements from this particular comedy oeuvre. It’s packed with gross-out humour (what do you expect from a show based in a herpes lab), nicely balanced with clever storylines (time travel means you are never in one place/era/genre for long) and laden with pop culture references from the best of the 80s and 90s geekdom.

Another big part of the Future Man world is the synthy soundscape composed by Halli Cauthery, that evokes some of sci-fi’s greatest films and thrusts us into a world where the line between real and virtual is forever blurred. I talked to Cauthery last week about scoring the future, the genius of The Terminator, and making sweet TV music with some of Hollywood’s biggest names.

Okay, this may surprise you but I am not a television composer, nor will I ever be. How does the process work for scoring something like Future Man begin?

It sort of depends on the project at hand. For Future Man, I started off having meetings with Seth Rogen and Evan Goldberg to talk about what they were looking for. It’s sort of an evolving process, all about having that dialogue with them and pitching in with ideas. Because the main character is obsessed with this fictional first-person shooter video game Biotic Wars and plays it for hours, Future Man sits in this Terminator-esque future. The machines have taken over, civilisation has collapsed and it’s completely lawless, so we needed something futuristic, a bit electronic and quite synth-driven.

Is working on a TV series more daunting than a film?

What’s daunting is the sheer amount of music in a TV show compared to a film. With a film, you are looking at probably anywhere between 70 and 90 minutes. When we were done on Future Man we added up that I had churned out about three feature films worth of music. That’s terrifying, so you try not to think of that too much when you get started.

The deadlines for TV are quicker and there are more of them. For Future Man we had 13 episodes and about a week to do each, but by the end of the week, you have to be revising and looking towards the next one. I have colleagues who, when they are in the thick of a project, will get up at 4 am to get that uninterrupted stretch where the phone doesn’t ring till 9 am. I don’t do that myself, the prospect of getting up that early is a little too terrifying for my tastes.

I read you took a lot of inspiration from the sci-fi scores of the 80s, were there particular touchstones that stand out?

The whole show is such an affectionate tribute to 80s sci-fi, so films like The Terminator and Back to the Future play a huge part. Going back and rewatching all those movies was a fun bit of homework that I set myself before I started. For example, Alan Silvestri’s score for Back to the Future is just marvellous and something I’ve loved for years, Predator being another one I’m extremely fond of. Seeing as the show itself has all these nods to the 80s, the score should as well.

In The Terminator there’s a recurring motif whenever you see the Terminator in action and it’s this percussive sound that conveys the relentlessness of the character, the machine-like remorselessness. I was inspired by that idea for the Future Man score. In one episode set in the near future inside the director James Cameron’s house, we used a lot of music inspired by Cameron movies. There are one or two pieces directly inspired by Alien.

Is there any ‘My Heart Will Go On’?

Funny you should say that… there just might be.

What’s it like working with Seth and Evan? They are quite big Hollywood names, did you get up to any hijinks or tomfoolery?

It’s actually nowhere near as glamorous as it looks, the workload is very heavy and the deadlines come thick and fast. Most of the time, you just have to get your head down and get writing. There was one quite fun wrap party when the series finished filming, but of course when they finish filming that’s when my job really starts as a composer. All the actors and crew who had been filming had finished their job and were celebrating, and we were still in thick of it. So I couldn’t get too drunk and sloshy.

That makes me feel less jealous. I’m assuming you’ve watched Future Man a lot of times now, what’s your review of it?

I still think it’s a terrific show. It’s really funny and full of high and low humour. There are lots of gross-out jokes and slapstick mixed in with clever references. All the performers are obviously fantastic, but the one I really like is Wolf, who is one of the freedom fights from the future. He is played by an actor called Derek Wilson, I didn’t know him before the show at all but I just think he is so funny. People are already saying he is the breakout star of Future Man, and it’s pretty hard to disagree with that.

Click below to watch season one of Future Man, exclusively on Lightbox