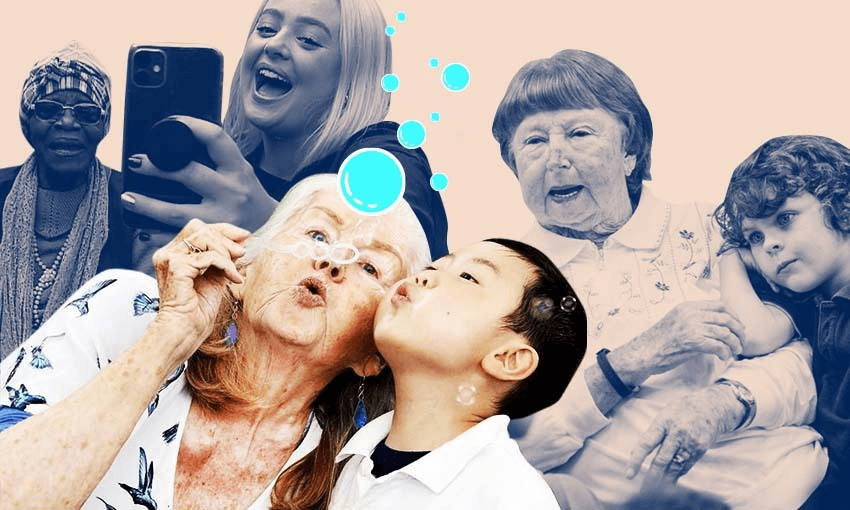 Love reality TV about intergenerational friendships? Start one yourself

A recent international reality TV trend sees people from different generations thrown into situations together with mixed results. But what can be learned from them here in Aotearoa?

Zoomer Liam is dripping with sweat as he scrubs at the soap scum lining the bath belonging to pensioner Flo, who is 86 years old and lives alone in a five bedroom house in Brighton. His mum still does all his housework, and he is shocked at the effort involved in cleaning a bathroom. “I’m young and fit and I’m bloody sweating doing this, let alone someone who is 86,” he wheezes, before proudly presenting his hard work to Flo. She is not impressed. “It’s not that it’s difficult for me,” she scoffs at the camera, “it’s just that I’d rather sit on my arse and do nothing”.

The UK series Lodgers for Codgers, airing on Thursdays on TVNZ1, can often feel like a concept created by AI bots. Grumpy older person with big empty house + grumpy younger person with no house = something to watch with human eyes? It is hardly going to change the world, but it is going to give us hilarious and heartwarming moments such as Flo (86) on the piss asking Liam (19) whether she should sign up to Grindr, and Sophie (20) tearfully bonding with Eunice (85) over their mental heath struggles.

The Australian series Old People’s Home for Four Year-Olds, which arrived on Netflix last year, embraces a similar intergenerational concept. Lonely folks in a retirement home are paired up with preschoolers for six weeks to see if the pairing improves their quality of life. As the little-uns toddle in for daily activities such as navigating a maze, creating a mural and watching baby ducklings hatch, you see the oldies shake off their gloom, all the while psychologists and physiotherapists monitor their progress in that sincere, pseudo-scientific, reality TV way.

Kevin Lamb, CEO of Age Concern New Zealand, has watched both these reality shows, hastily noting that they “aren’t really my cup of tea”. In his work at Age Concern, a charity providing specialised services and support for people over 65 across New Zealand, he has seen a reality for thousands of older New Zealanders that is seldom reflected on television screens. “We are constantly battling the notion that if you are an older person, you’ll be OK because you’ll have family or friends to look after you – and if they don’t then the government will.”

There are currently more than 750,000 New Zealanders over the age of 65, a population that is estimated to increase to upwards of 1.2 million by 2034. Studies have found that more than 20% of the current population of over 65s in New Zealand suffer from severe loneliness and isolation. “That can lead to real detrimental issues around emotional and physical wellbeing,” says Lamb. “We know that for older people who possibly don’t have children or grandchildren, or are distant from them, it is hugely beneficial to connect with younger generations.”

An enormous positive of these reality shows that pair the young and old, Lamb says, is their ability to obliquely raise awareness of both the challenges that older people face, as well as what they can offer younger generations. “It really promotes the benefits of intergenerational friendship,” he says. “I do think it resonates with people because they reflect on their own circumstances – for example we know a number of older people across New Zealand are asset-rich and have a house, but they are very, very lonely.”

Although they may provide a window into these issues, reality television is known for limitations when it comes to nuance – perhaps not a revelation from a series with a title like Lodgers for Codgers. “Personally, I wince a little at referring to old people as ‘codgers’ because it has such negative connotations,” Lamb says. The stereotypes aren’t helped by the spectacled man waxing lyrical about how he used to work 65 hours a week for 50p, and the Instagram model millennial who spends over $1000 a month on various elements of her hair and face.

Lamb’s concern is that the short, frothy reality formats can skirt over the complexity of the societal issues that they are attempting to fix. “I think it doesn’t quite convey the true long term challenges that a lot of old people feel, and the risk is that it glosses over it and makes their situation seem not as bad as it is in real life.” The six week experiment within Old People’s Home also raises questions of responsibility once production ceases, particularly after such strong bonds are formed over time between participants.

“Rapid change is often not a positive experience for anyone, and more so for older people,” says Lamb. “The fact is that it is really important for older people to have a sense of stability.” While an epilogue shows tearful reunions and regular catch-ups, Lamb says the secret to maintaining these relationships is continuing them over the course of years, not weeks. “What that does is establish a stable relationship and friendship that is extremely meaningful and supportive and can be a very mutually beneficial relationship for both parties.”

Social schemes seen in these shows have been in place in the US for years, and the Netherlands invites university students to live rent-free in nursing homes in exchange for company and “good neighbour” behaviour. Of course, the concept of generations spending time together is nothing new for many cultures in Aotearoa. “When we are working with Māori or Pasifika families, there is definitely much more of a tradition that young people or collective whānau will look after older people,” says Lamb. “In terms of Northern European culture, there isn’t that same sort of sense of traditional responsibility and caring for older relatives.”

Even when cultural norms dictate that the older generation are expected to be taken care of, Lamb says the modern world can still stray from tradition. “One of the things we always say is that people shouldn’t confuse loneliness with being alone,” he says. “We work with a number of older people who live in busy, crowded family environments who are basically sitting in the corner with very little participation and engagement. That can be just as lonely an experience.”

If you find yourself moved or inspired by shows such as Old People’s Home for Four Year-Olds or Lodgers for Codgers, and don’t have any older people in your own life, Lamb says there are plenty of ways to make these reality shows closer to your own reality. “What I would urge anyone to do, if there’s an older person or a younger person watching these sorts of shows, is to reach out and contact one of the organisations that works in this sphere across the country.”

People looking to volunteer should be acutely aware that this kind of companionship is an ongoing commitment. “We will always explain to everyone the importance of stability – dropping into someone’s life for a month and then disappearing isn’t something we can do. It could be an hour or two a fortnight, but it has to be continual.” If you can spare the time, the relationships that you can form over time can have “huge amounts of value” to both parties, says Lamb.

As for the television shows themselves, a local iteration of the likes of Lodgers for Codgers or Old People’s Home for Four Year-Olds would be welcomed by Age Concern. “Any programme which raises the realities and challenges of older people, that raises issues around ageism, there is definitely room for on New Zealand television,” says Lamb. “But I do think what would be more valuable is programming that highlights the value of older people and the challenges these communities face, and then leaves the audience with a much deeper understanding.”

Without cameras rolling, Lamb has seen the way the interactions between young and old can enrich the lives of both generations. He says that weekend sessions where savvy folk teach older people about how to use technology often end with the younger teachers being “rapt in amazement”, with tablets and phones cast aside, as the older people yarn about their lives. “You can actually see the shift happen,” Lamb says, “that realisation is quite extraordinary to see.”

Or, to put it in the words of one Lodger musing about her allocated Codger, “they’re not really that different to us – they’re just in an older body with a house that I don’t have.”

Lodgers for Codgers screens on Thursdays at 8pm on TVNZ 1, and is streaming on TVNZ onDemand. Old People’s Home for Four Year-Olds is available on Netflix.