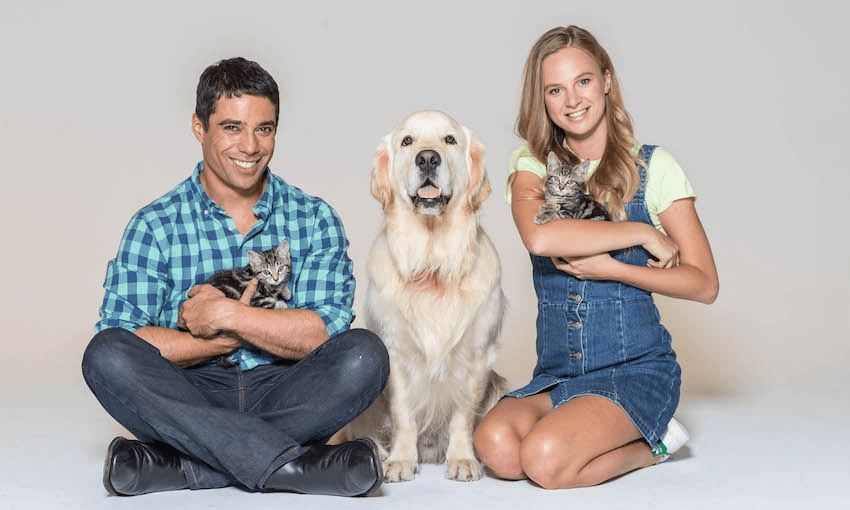 The hosts of Fanimals, the best kids show on TV, and their furry friends.

The hosts of Fanimals, the best kids show on TV, and their furry friends.

A few days ago, Fanimals announced it would not be returning for another season. Emily Writes, and her kids, are heartbroken.

On my list of things I might write about one day it simply said ‘Fanimals’ sandwiched between ‘How old is BeckBroJack?’ and ‘Is Peter Krause the most dad-like dad on television?’

I wanted to write about how much I adored Fanimals, about how it’s really the only television I actually like my kids watching, and how it’s one of the only true family shows on television. And then, I got an email from a frantic mum telling me that Fanimals is being cancelled.

They confirmed it on an episode a few days ago. It’s all true. At the end of this week it’s over. Children and parents were given no time to protest this grave injustice. TVNZ2 has just viciously snatched away our unproblematic fave and it’ll probably be replaced by Norman Fucking Price.

Fanimals must be saved. Fanimals is by far the best New Zealand TV show for everyone. Not just children but adults too. Oh how many times I have curled around my kids eating popcorn as the soothing enthusiasm of sexy vet Stacey Tremain (following in the footsteps of many other sexy vets like Bondi Vet and that Instagram vet) teach us about mice. The kids excitedly yell out quiz answers at host Jess Quilter, who is generally delightful, ever patient in the face of animals pooping and jumping all over her.

For two years Jess has managed to get great answers from kids because she was so obviously interested in what they had to say. She spoke directly to children in such a kind way. Sometimes you can just see when someone loves what they do, and it saddens me that we won’t see her each day from next week.

Every day at 4pm Fanimals was appointment viewing. How could it not be? I am a fan of animals. What kind of monster isn’t a fan of animals? Whomst among us is not a fanimal?

Along with the wonderful website and app, my children would just fizz with excitement to see if their questions (“What is the softest dog?” and “Do dogs get diabetes?”) were answered or if their photos of their pets would be shared.

It was a show that fully absorbed my children. They would beg me to jump on the app and email Stacey. They would yell “MOLSON!” at least twice every episode he was on. They loved the te reo Māori throughout the show – all of the other kids’ TV on TVNZ2 basically has none. Or it’s token and piss weak.

Fanimals was lovely. And I wasn’t alone in thinking so. Kate Stalker’s six-year-old children Greta and Tom loved Fanimals and so did she.

“It’s a Kiwi show for our little Kiwis. It’s educational and relatable. It has wonderful, conversational te reo what more could you want? And amazing conservation information too,” she says. “I am constantly impressed with how genuine and knowledgeable and caring Jess is. What a total gem.”

Helen Gilby’s daughter Chloe, 6, is a huge fan too – she even got to be on the show herself.

“I liked that I got to go on Fanimals with my favourite dog Poppy and talk about what she does and I was on TV,” Chloe says. “I like all the people sharing their animals and seeing all the pets and how they look after them.”

Helen was a fan too. “It was such a great opportunity for New Zealand kids to see each other on television. It’s a total favourite in our house.”

There truly is nothing to dislike about Fanimals, which seems like some kind of deal with the devil considering it’s children’s TV. So of course something so wholesome and focused on families, something genuinely engaging that we want to watch as a whānau, would be cancelled in favour of some hot garbage imported from the US.

On what other show would children from New Zealand have the chance to chat with conservation icon Jane Goodall? Te Kura Kaupapa Māori o te whānau tahi pupil Ti Amo Taputu-Crombie had the opportunity to ask her: “What do you love most about chimps?”

My kids are among the Fanimals fans who’ve been inspired in their conservation efforts by the show, which has always taught kids they can make a difference.

Fanimals gives kids wonderful messages of empathy and love for animals and the planet. The show treats children as intelligent viewers – just today they showed a surgery on a working dog’s tear duct. My kids were fascinated.

I know I’m gushing about this show but it really was so great for our kids to be able to see other kids like them – and more importantly, other kids who are nothing like them; they got to learn about how kids live all over the country. This kind of television that centres children and holds them in such high esteem is just so rare. When most television for kids is a hideous sensory overload, devoid of any kind of positive messaging and full of the most horrific American (or Welsh for fucks sake) accents, Fanimals was a rare bright spot.

It’s such a shame that children’s television no longer seems to be something New Zealand wants to invest in. Mister Rogers, my hero and parenting inspiration, talked so much about the importance of good television for kids. He said his show was never just a show – it was a way to reach out to all children everywhere and ensure they are seen. In the 1960s when it screened, it was an immensely turbulent time for children in America. Mister Rogers was a calming light for children.

He was able to reach children because he didn’t see television as something kids just blob out of in front of. He wanted to inspire them, energise them. Most of all, he wanted to teach them what it means to be human.

“The whole idea is to look at the television camera and present as much love as you possibly could to a person who might feel that he or she needs it,” he said.

What a shame that we’re losing another television show that sought to do the same. To the staff and crew of Fanimals from parents all over New Zealand: Thank you so much for delivering such wonderful television. We absolutely loved it.

You can watch Fanimals on TVNZ2 and Heihei.