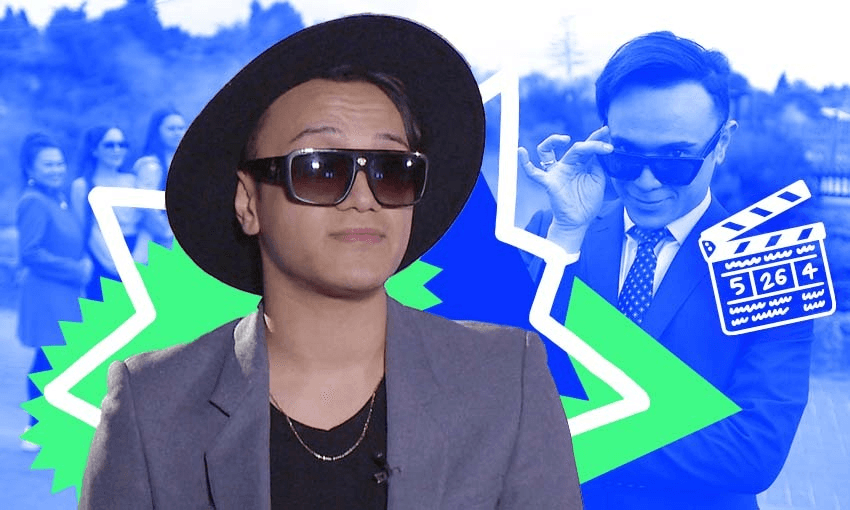 If there’s unbridled energy to be found in the new series about the Miss Rotorua pageant, Gowns and Geysers, it’s not to be found spurting forth from the ground. Instead, it’s in the small, suited frame of Kharl WiRepa.

WiRepa, whose wild life story includes being the first Māori designer to be featured in British Vogue – and also benefit fraud, stabbing and addiction – has the kind of presence that TV makers build reality shows around. While Gowns and Geysers is ostensibly about last year’s Miss Rotorua, a pageant he revived back in 2018, it’s really, truly about Kharl WiRepa.

The force behind the pageant, in a role that seems to arbitrarily shift between judge, jury and executioner, WiRepa is the kind of character that reality show dreams are made of. He is proudly addicted to Fizzsticks, a Raro-type product from Arbonne, the MLM that every woman you forgot to delete on Facebook seems to shill. He is a “strong advocate” for deer products. In one episode he gets Botox on camera over the end credits, context free.

He is also, somewhat improbably given his camp affect, a Mormon who drops Lucifer and Satan into conversation as casually as most people reference a slightly unruly neighbour. A direct quote: “We must make sure that we kill Lucifer and make sure that he is not in our house … so I’m not having any food today ladies because I’m preparing for NZ Fashion Week.”

It’s unclear whether WiRepa is playing up for the camera or really does live his life as though there is a film crew waiting to catch every gesture, every gutsy attempt at a catchphrase. That lack of clarity means he’s electric to watch – you’re never sure how, exactly, he’s going to act. Is he going to reach out a warm, supportive hand or toss out a withering put down?

The closest comparisons I could come up with are a character in a Christopher Guest film, Jennifer Coolidge in The White Lotus, or some sort of chimera-esque fusion of the entire Rose family from Schitt’s Creek. One moment he’s pure Moira Rose, dancing around the subject of a contestant’s pregnancy, flouting every rule of sentence structure (“I understand that I have heard that you may possibly be pregnant”). The next, he’s Moira’s son David, bluntly, but not unkindly, asking that same contestant if she’ll be skinny when Miss Rotorua is crowned. To be clear: these comparisons are a compliment.

Gowns and Geysers isn’t quite the series it wants to be, though. It tries to cram a lot of material into eight bite-sized episodes – each one clocks in under 15 minutes – and there’s never enough time to deal with all the issues it raises, including the often difficult pasts of the women involved in the pageant, nor with the sheer amount of contestants involved. The short shrift some contestants get is a shame, particularly since the stories of these women, what they’ve overcome and what the pageant means to them is genuinely moving. This is a lens that we don’t often see on the world of beauty pageantry, and even though time limits the size of that lens, it’s valuable nonetheless.

These issues are reflected in WiRepa as a presence in the series. He’s trying to be everything and do anything, and thus ends up being both the hero and the villain of this story. It’s this tension that makes him fascinating to watch. He genuinely wants the best for the contestants, while also being startlingly inflexible about his idea of fashion and the slightly draconian, deeply unclear, rules of the pageant. He is both playing to the camera and wanting to seem like all of this is coming to him naturally, in the moment.

Am I looking too deeply into WiRepa? Possibly! But I’m sure he’d find being put under the magnifying glass delightful. While his passion for the pageant is genuine, the timing of this series is perfect for building buzz ahead of NZ Fashion Week, and there’s a lot of him in this series.

What makes this different from a vanity project isn’t just his refreshing lack of care for rehabbing his image, but the fact that he seems unsure of what precise image he wants to project. Is he your best friend or a fashion lawmaker? Is he benefactor or dictator? Maybe he’s just a guy doing the thing he loves. Whatever image he wants, I’ll happily watch him build it if it’s this magnetic.

You can watch Gowns and Geysers on TVNZ OnDemand now.