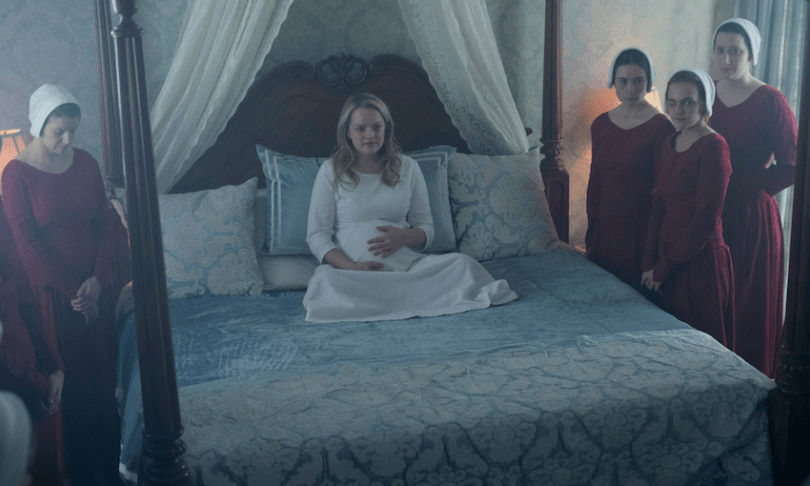 We’re rocketing towards the ending of season two of The Handmaid’s Tale, and Gilead is not letting up one bit. Tara Ward recaps episode 10.

Let myself introduce myself: this is me after I watched this week’s episode of The Handmaid’s Tale.

I am ruined. I am a bleeding carcass of emotion, stripped of everything that is good and pure. Please take me home, mount me on the wall and let my dead eyes haunt you forever, because this one hour of television destroyed me.

There were two brutal, agonising moments in ‘The Last Ceremony’: Fred and Serena’s rape of June to try to start labour ‘naturally’ (what’s wrong with eating the core of a pineapple, ffs), and June’s secret reunion with daughter Hannah. The whole episode left me so wrecked I had to eat half a packet of Toffee Pops and stare at Jacinda and Clarke’s baby announcement for twenty minutes just to compose myself.

It was too, too much, so let’s find some moments of beauty among the bleakness, like this lovely chandelier:

Or this beautiful blossom in Serena’s glasshouse of misery:

What about these charming paintings of horses? Horses! Always good for a laugh.

While the world waited for the arrival of Jacinda’s baby, all of Gilead waited for June’s. Her contractions began in the supermarket, and it was absolute scenes at the Waterford mansion as June returned to give birth.  Men gathered to indulge in some classic locker room banter, handmaids supported their fecund queen atop an Everest of pillows and the wives argued over who wore their green turtleneck best.

June’s labour was all about Serena, who bathed in the righteous glow of being pregnancy-adjacent. Surrounded by a calming sea of candles and dolphin music, a resplendent Serena reclined on the couch and rubbed her belly. Seems fine, I partake in a similar ritual when I’ve eaten too many bread rolls and need to deliver a food baby of my own. Blessed be the fruit, indeed.

It was the best of times, it was the worst of times. When June’s contractions turned out to be false labour, Aunt Lydia shut the birth party down before it had even begun. Serena was furious, because that’s the last time she’s literally letting her hair down in public for a bit of trapped gas.  It’s a mad old world, and if we’re not all having tantrums in the greenhouse over the refusal of our handmaid’s cervix to open like a flower, then what is life?

But the oxytocin flowed like Eden’s sweet custard pie, as Isaac and Eden pashed beside the rubbish bins and June and Nick shared a moment in the ambulance. Blame it on the sunshine, blame it on the boogie or just the radioactive gases from the colonies, but what the flaming suns of Gilead were they thinking?  Eden saw it, probably all of Gilead saw it. Even that dead sheep’s head in the supermarket was picking up what June and Nick were putting down.

There’s only one thing this can lead to, and it’s not some sort of delicious paleo bone marrow broth.  It’s trouble, my friends, and it looks a lot like this.

But June’s no stranger to danger and with nothing left to lose, she asked the Commander to let her see Hannah. Fred lost his temper, because this is the sort of shit you have to deal with when you “indulge and spoil” ye olde handmaids.  Chuck on a Lionel Ritchie record and tell us how you really feel, Commander. June was all “WTAF” and told the Commander he has “no idea what it’s like to have a child of your own flesh and blood, and you never will”.

Boom. That’s the sound of a “your driver is the father of your handmaid’s baby” truth bomb exploding all over the Commander.

Fred Waterford is a lot of things, but he’s no idiot. I’m sure there’s more behind his move to send Nick and June to an abandoned house in the middle of nowhere, other than just meeting Hannah. After shots were fired and Nick thrown into a black van, June was left alone in the winter wilderness, so pregnant she could barely stand and emotionally bereft after being forcibly separated from her daughter for a second time. Sweet baby cheeses, someone get me more bread rolls, stat.

I hope there’s a car in the garage with a full tank of petrol and a map that will lead June to a sympathetic neighbour who also happens to be a midwife who lends June a suitable baby car-seat and points her in the direction of Canada. But this is The Handmaid’s Tale, and that scenario is as likely as a Fred Waterford song and dance number to the Lionel Ritchie classic ‘Dancing on the Ceiling’. Please excuse me while I go and stare at the new Ardern-Gayford family for the rest of my life, and may the force be with us all.