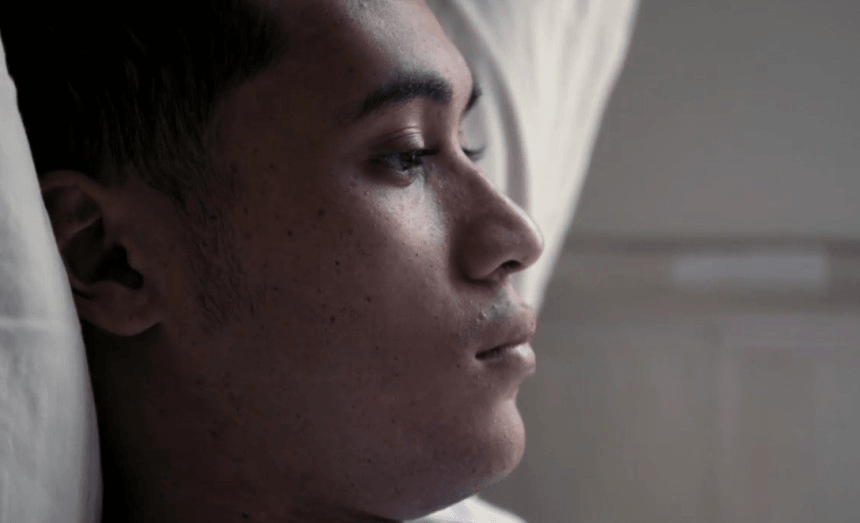 When James Rolleston was a little boy, he used to peer at the TV from his front lounge in Ōpotiki and say “I want to be in there.” Several years later, his wish came true in a big, big way. Moonwalking his way to fame as the grinning kid wonder in Taika Waititi’s coming-of-age comedy Boy, Rolleston went on to be in almost every major New Zealand film of the last few years including The Dead Lands, Dark Horse and The Rehearsal. By the age of 19, he had Hollywood in his grasp.

Then he nearly died in a car crash.

Losing control after speeding around a corner in Ōpotiki late one night in 2016, James and his pal Kaleb’s lives were changed forever. With his legs trapped, potentially needing amputation, and three severe head injuries, his life hung in the balance. It’s this violent, life-shattering event – and the journey back to health – that is explored tonight in Wait For Me Hollywood, the final instalment of TVNZ1’s Sunday Specials.

Joining Rolleston a month after the accident, the documentary provides unfettered access to his recovery from having zero brain function to eventually getting back in front of the camera. His whānau, friends and industry mentors share their experience of the process, from his lovely Nan to Cliff Curtis. James is “the ultimate New Zealand success story,” reckons Cliff, who comes across as a father figure throughout. He’s not wrong, and there’s no irony lost that James Rolleston now possesses a miracle narrative that Hollywood producers only dream of.

Rolleston narrates the journey himself as he takes literal baby steps to regain his physical strength and work on his speech and memory – the loss of which is particularly ruinous for an actor. It’s also made clear that restoring his mental health is a journey just as challenging. “I just feel damaged as,” James says, as the long days alone and confined begin to take their toll. He breaks down on camera, and we are invited to see that same generous vulnerability that put him on big screens across the world.

But the people involved from a traumatic accident aren’t the only ones who have to suffer. Wait For Me Hollywood also explores the relationships that need rehabilitating, from counselling with Kaleb and his family to the strain on James’ relationship with his nearest and dearest. How does one go from being the girlfriend of a movie star to a taxi driver and full-time nurse? It’s this minutiae in the aftermath of trauma that we very seldom get to see. With the media breathing down his neck and court appearances to fulfil, there’s a lot of spinning plates.

Wait For Me Hollywood warmly encapsulates that same small town spirit that seeps into Taika Waititi’s universes, with classic Māori folk song ‘Tūtira mai ngā iwi’ laying over languid shots of Ōpotiki rush hour (one guy on a ride-on mower). The sense of place is pulled into sharp focus when we travel to Auckland with James for the premiere of Pork Pie, his first public appearance since the accident. The noise and chaos is relentless. He returns home, shattered, and returns to the quiet hobby of eeling. “Put your bloody phone away,” scorns his Uncle, “you’re not going to catch any eels with your phone.”

So Wait For Me Hollywood does many things exceptionally well, always sensitive and respectful to a very fragile story. It’s also the most resonant safe driving campaign since that ghoulish man with the spinning wheel at a roundabout. As we remain firmly on track for our highest road toll in years, seeing the impact of one reckless manoeuvre on a young man’s life – and the lives of everyone around him – speaks volumes. As James says himself, he used to watch the news and swear that something so horrible would never happen to someone like him. Just like the rest of us.

Wait For Me Hollywood airs tonight on TVNZ1 at 7.30pm

This content is brought to you thanks to the excellent folk at Lightbox. Do us and yourself a favour by clicking here to start a FREE 30 day trial of this truly wonderful service.