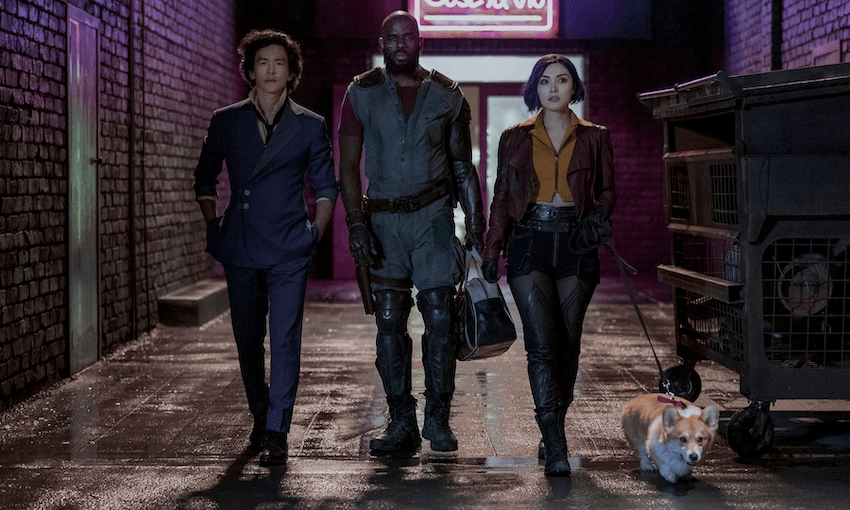 Are these bounty hunters from Cowboy Bebop strolling through Auckland? Probably! (Photo: Netflix)

The Auckland locations that turn up in Cowboy Bebop

Are these bounty hunters from Cowboy Bebop strolling through Auckland? Probably! (Photo: Netflix)

Just over two years ago, New Zealand got the news that the live-action adaptation of groundbreaking anime Cowboy Bebop would be shooting in our very own Tāmaki Makaurau. At the time, it sounded like an odd choice. How could Auckland possibly double for the full expanse of the solar system circa 2071?

Now that the series is out, it turns out the country’s largest city does the job pretty damn well. It seems the lack of planning that went into Auckland’s 20th century built landscape makes it the perfect stand-in for the messy sprawl of Cowboy Bebop after Earth goes to shit.

As someone who’s lived in the city for most of their life, I had my eagle eyes open to spot which bits of Tāmaki Makaurau turned up in the series. You can fool the world, Netflix, but you can’t pull the wool over my eyes (especially because I’ve been staring out my living room window at one of these locations for most of lockdown). Here are the places I spotted – I’m sure other residents will recognise even more.

The first episode ends in a shootout between bounty hunters Jett and Spike and their prey, a seemingly pregnant woman on the run from her family and her drug- and rage-addled boyfriend. If you watch this scene and wonder why there’s a lot of old planes there, that’s because it was shot at Ardmore Airport, about 10 minutes outside of Papakura.

Episode two opens with Jett and Spike, still on the hunt for their target, crashing a wedding.

Where is that wedding taking place? It’s St Matthew’s Church, one of the most picturesque places of worship in Auckland. As a lapsed Catholic it pains me to hand that label to a Protestant church.

Episode three revolves around two story lines: Jett (Mustafa Shakir) searching for a very specific doll to give to his estranged daughter, and Spike hunting down a bounty who is wanted for stealing animals, but who keeps changing his face. This is your reminder that Cowboy Bebop is based on an anime.

The bulk of the episode is set in and around a sex club/brothel hybrid located on a street that looks a lot like Cross Street, with its distinctive corridors over the street. That’s because it was filmed on Cross Street.

Look, if you want an interior location that looks like what an 80s architect thought of as futuristic, you should probably shoot at the Skyworld complex on Queen St. But if you need exterior shots you could do a whole lot worse than Spark Arena, which pops up for a few seconds when hostage Faye Valentine (Danielle Pineda) escapes from eco-terrorists in episode four.

The final confrontation of episode four takes place at the most picturesque place in Auckland I’ve never heard of: Waitawa Regional Park. The location of my next socially distanced drink? Maybe!

During a scene in episode seven the three leaders of the Syndicate (including Mao, who is played by Rachel House) meet to plot and scheme, as you’d expect from characters who belong to a group calling themselves “the Syndicate”.

The location of this meeting? Why, it’s Pah Homestead, the glamorous Hillsborough art gallery. The spaceship, presumably, is CGI.

In the market for a location that has a lot of old grain silos to make it look industrial? Why, we have just the place for you. Silo Park on the Auckland waterfront pops up in episode six, when the gang is helping Faye find her identikit so she can figure out who she is. This is another reminder that Cowboy Bebop is based on an anime.

For one brief moment in episode nine, a flashback episode that shows us what went down between Spike and series villain Vicious, we see a bunch of people lined up outside a familiar stone building in the Auckland CBD. Specifically one on Durham Lane.

It’s the place that used to be known as the Bluestone Room, which my colleagues tell me did a “mean quiz” and was a “very cold, cave-like tavern”.

In the same flashback episode, Spike and Vicious go to a nightclub where they both first set eyes on Julia. But what Auckland location is the backdrop as the two former friends walk past the Syndicate’s intimidating thugs? Why, it’s the Kingsland train station (Taiko Kingsland, an excellent Japanese restaurant, gets a cameo too).

I don’t know exactly where this is, but I’m just pleased that Atlas Concrete has survived not just the 20th century, but the collapse of Planet Earth. Take that, Amazon!