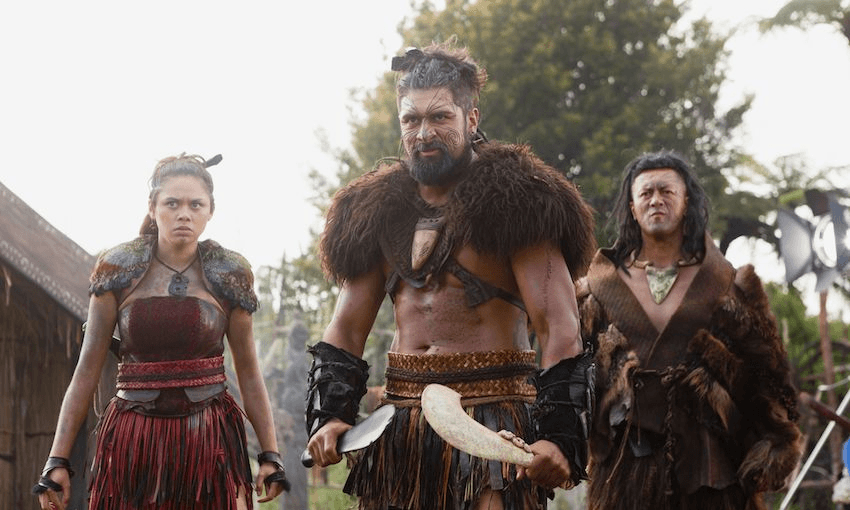 How The Dead Lands hopes to change New Zealand television

The first two episodes of TVNZ’s new action series The Dead Lands were released to a worldwide audience of millions last night. Alice Webb-Liddall spoke to some of the cast and crew about the epic genre-bending show, and what it means for New Zealand television.

When The Dead Lands was released in 2014, some called it the first Māori karate movie. Toa Fraser’s gory action flick followed a Māori chief’s son avenging his father’s death, and won awards both here and overseas. Now a spinoff show has arrived on TV screens with the same name, but a new premise: a Māori take on the zombie action genre.

In The Dead Lands, the TV series, newcomer Darneen Christian stars as Mehe, a Māori girl seeking to avenge her father’s death and save the world from a horde of monsters with the help of Waka Nuku Rau (Te Kohe Tuhaka), a revered ghost-warrior.

This is Christian’s first major screen role since graduating from Toi Whakaari, the New Zealand drama school, in 2016, and she says nothing could have fully prepared her for the reality of life on a big-budget set.

“All the training I did at Toi, that was helpful, but I wasn’t used to working off the bat and under such high stakes, learning lines that day and having to adjust to the schedule because it was changing all the time.

“It was freezing,” she admits. “They had blankets which they turned into ponchos for us, but when you’re out in the cold so much of the time it doesn’t really do anything. Mine and TK’s feet turned to leather at the end of it.”

“I was pretty intimidated by the guy but the more I got to work with him it was awesome. For my first job it was good to have someone like TK to work with and show me the ways a bit. Working with people I’ve watched since I was a kid, I was working with veterans. I’m just this rookie who just stepped on and said ‘hey I’m doing this mahi with you guys’, and it’s scary.”

For his part, Tuhaka took his senior role on set seriously. “I did feel the weight of responsibility, not so much in telling the stories, but in looking after a whole lot of whanau, friends, family. We would never have been able to make it to the end had there not been that feeling of knowing that someone constantly had my back, my front and my sides, be it from the lighting department or the sound department.

“People would come up to me and go ‘what are we actually doing?’ [and I’d say] ‘I don’t know, but when I know I’ll let you know and then you let everyone else know, but for now we’ll just stand here and keep nodding like we know what we’re doing.'”

While inspiration for the series comes from the 2014 film, the two productions are drastically different. One of the key changes is in language. The film was shot entirely te reo Māori with English subtitles; the show is mostly in English, albeit with significant amounts of te reo.

That change is hardly surprising. A funding and distribution agreement between TVNZ and AMC, the American network responsible for The Walking Dead and Breaking Bad, meant creators needed to ensure the show appealed to as wide an international audience as possible. Executive producer Matthew Metcalfe says he was nervous about the partnership, but the end result was a unique story that is filled with te reo and tikanga Māori.

“I was so worried about AMC coming down really hard and that I would be fighting with them about the reo content, but not once did they do anything but say ‘make it genuine, make it sincere, lean into it and own it.'”

Producer Tainui Stephens says he’s proud that te reo Māori and tikanga Māori will be broadcast to the world when the series is released on AMC streaming services in the USA, UK, Ireland and Canada.

“I loved the film because it really uplifted te reo. With the show, I think of it as a product and taking a Māori product out into the world. There’s a lot of things we can say about it, it was a lot of fun to make, we had a great time and it was just a big whanau buzz.”

Despite being part of a 100% Māori and Pacific cast, Darneen Christian says she personally feels the weight of responsibly showcasing Māori culture to the world. But the real test will be in how Kiwi audiences react, she says. “I want to make sure I’m doing the job right, not just for myself and my whanau but for my culture, too. It’s more important to me that New Zealand is impressed with it, because they know Māori people. I’m just hoping that they love it.

“There are so many wahine toa in New Zealand who could take this role through the roof. I don’t speak te reo and I wasn’t brought up in a Māori way so I feel like it was a privilege that [the casting team] was like ‘this is our Mehe’.”

The partnership with AMC is a breakthrough for New Zealand television, and it could have huge ramifications in creating opportunities for Kiwi talent overseas. Metcalfe wants The Dead Lands to be the first of many New Zealand series making it to major international markets, and showing our talent to the world.

“It’s going to allow our young people in this country to see themselves as superheroes and to know that people in the largest television markets in the world are seeing it as well. Millions of people are seeing these young actors in their culture telling their stories.

“We have never done this in New Zealand before. Whatever comes next, we’ve broken down the door and other shows can now go there.”

The first two episodes of The Dead Lands are streaming now on TVNZ OnDemand.