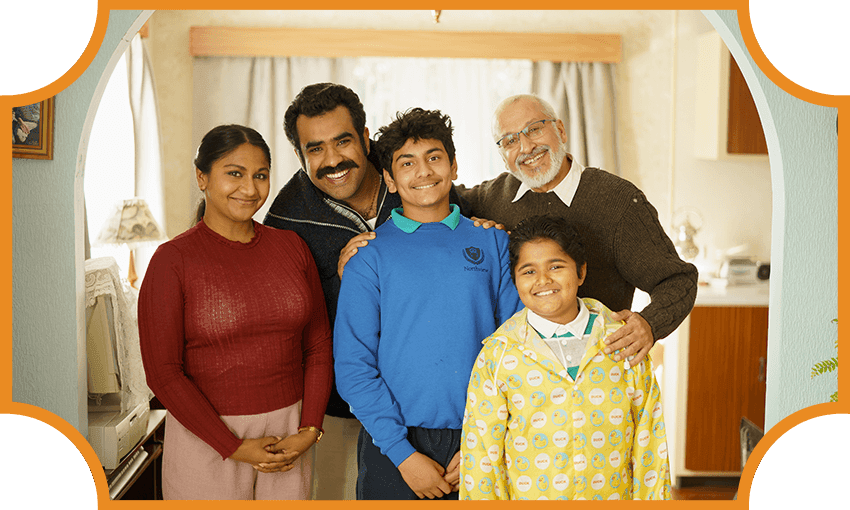 The Assadi family in Raised by Refugees (Photo: Sky TV/Supplied)

The Assadi family in Raised by Refugees (Photo: Sky TV/Supplied)

For Afghan-New Zealander Abbas Nazari, the new Pax Assadi comedy stirs memories of his own family life in the early 2000s.

I’m often asked what it’s like to be a refugee and to be honest, I’ve never had a clear answer. I tried to answer that exact question in my book, After The Tampa: from Afghanistan to New Zealand.

You may know Assadi as a standup comedian; he’s a familiar face from his regular appearances on 7 Days and The Project. Now, Assadi, who was born in New Zealand to Iranian parents who arrived as refugees to New Zealand in the 1980s, has his own show. Raised By Refugees is clearly a labour of love, with Assadi telling one interviewer he’s “never put so much heart and soul and blood, sweat and tears into something before.”

Set in Auckland’s North Shore at the start of the new millennium, Raised by Refugees revolves around the Assadi family – Iranian dad Afnan (Assadi), mum Safia (Kalyani Nagarajan) who is Pakistani, and their sons Pax (Kenus Binu) and Mahan (Adam Lobo) who were born in New Zealand. Episode one sees Afnan starting work as a vacuum salesman, young Pax nervously arriving for his first day at intermediate school, and Safia fretting over cooking Persian food for her Iranian in-laws. If that wasn’t enough of a challenge, the 9/11 attacks bring an added layer of complexity to their lives.

Though his perspective is unusual in New Zealand, Assadi’s storytelling in Raised by Refugees will resonate with people of every background. It’s an authentic and humorous take on the refugee and immigrant experience, a hectic blend of personal stories and insightful observations that will have you laughing along every step of the way. Watching the show, I saw myself and my own refugee family in many of the scenes. The series’ attention to detail is meticulous, from the dates and naan bread on the breakfast table, to the traditional music that plays in the background, to the often-tense dynamics of an interracial marriage.

But this show is not just for refugees – there is something for everyone here. Assadi artfully tells the story of a Kiwi kid growing up in the North Shore, encountering puberty, the challenges of making friends at a new school, trying to impress his crush, and all the while navigating his mixed identity and heritage.

In Raised by Refugees, I saw myself in many of the scenes. Like the young Pax, I grew up as a happy go lucky Afghan-Kiwi, running around without a care in the world amongst the other boys at Riccarton Primary School in Christchurch. We had arrived to New Zealand in the weeks after 9/11, having been rescued by the Norwegian container ship the MV Tampa. Just like the young Pax moving to Auckland, we navigated our new world in Christchurch, often living in the space between the old and the new.

Perhaps the strongest parallel with Pax’s story is that I distinctly recall my brother Ali claiming to be Tongan, just like both the real Pax and his fictional alter ego. In Ali’s case, this wasn’t because of the terrorist jibes, but mostly because the Tongan kids, especially one named Richie Mo’unga, were the coolest kids at school.

My favourite character in the series is Pax’s father, Afnan, played by Pax Assadi himself. Afnan reminds me so much of my own father. Learning the nuances of the English language and shuttling his kids from school while working two jobs, and all the while ensuring his family retain their cultural identity – all this was so familiar to me from my own childhood in Christchurch.

New Zealand is rapidly becoming more diverse, and it is refreshing to watch a quintessentially Kiwi story that reflects this new Kiwi experience. Like all great comics, Assadi is able to infuse laughter into the most serious scenes. An example: when the breaking news alert shows the 9/11 attacks, the silence and shock of the tragedy is punctured by younger brother Mahan (Adam Lobo) insisting on switching the channel because his favourite game show has just started.

Growing up, two of my favourite shows were Bro’Town and Everybody Hates Chris, which ran for 32 and 88 episodes respectively. I probably watched every single one. There are only six episodes of Raised by Refugees so far, but I’m hoping it will  run and run. There are plenty of laughs to be had yet.

Abbas Nazari is the author of the bestselling After The Tampa: From Afghanistan to New Zealand (Allen and Unwin, 2021), available at all good bookstores.

Raised by Refugees starts tonight, Thursday, February 24 at 8.45pm on Prime, before becoming available to stream on Neon and Sky Go