I am an athlete in my prime, and sleep is for losers. The Tokyo Olympics 2020 launched yesterday, and although the opening ceremony began deep into the New Zealand night, I was ready. I’d had an extra year to prepare. I snuck in a power nap, I did my stretches and even unscrewed a tube of Deep Heat, just for the smell. Best of all, TVNZ1’s Olympic team were with me, three presenters primed to hit their peak at 10.15pm, ready to take our weary hands and lead us all to victory. “Welcome to something huge,” presenter Toni Street said, as ‘The Final Countdown’ rang out through the studio. Like us athletes say, no amount of training can prepare you for this moment, especially when you realise Toni and fellow hosts Scotty Stevenson and Sarah Cowley Ross have coordinated their clothes to match the colours of the Olympic rings. They’d barely said a word, but already this trio deserved gold. Stand down Lisa Carrington, there’s some new Olympic legends in town and they’re not even wearing lycra.

See also:
All the Summer Olympics opening ceremonies, ranked
A tragic’s guide to watching the Olympics

Toni, Sarah and Scotty sat at a smart white desk, but behind them lay a portal to another world. It was Tokyo on a screen, a city filled with neon lights and flexible athletes and many exciting things. It looked like what I dreamed every Friday night would be when I grew up, because there was no way I’d become an adult who spent her evenings sitting in bed eating Cheese & Bacon Shapes from the box and wondering whose idea it was to put the Olympics on so late. No, I was born to live inside that TVNZ1 studio, where the lights never dim and the talking never stops. Toni, Scotty and Sarah sat inside their own stadium of dreams and discussed New Zealand’s best medal contenders, while pink lights whizzed across the screen and skyscrapers twinkled in the distance and newsy graphics popped up from nowhere. Some call this “technology”, but I call it a feast for the eyes, the best migraine aura I’ve ever had.

There were 45 minutes to fill before the opening ceremony began, so while Scotty Stevenson interviewed Olympians Eliza McCartney and Mahe Drysdale, I stared at all the magical things happening in the background. What would I buy in that convenience store behind Scotty’s right shoulder?  How high could I climb that tree behind Mahe Drysdale? Will we discover Wally was hiding in the Olympic Village all along? My training had not prepared me for this. “We don’t want you to miss a moment that matters,” Scotty said, but it was too late. I’d already moved into the big green skyscraper next to the flashing pink needle building, across the road from both Mt Fuji and a giant digital clock with “TOKYO TIME” written across it. If this was the Olympic spirit, then I was absolutely full of it.

Toni, Scotty and Sarah chatted like old mates, but I felt like I’d never seen electricity before. The lights grew brighter as the opening ceremony neared, and the team crossed live to Tokyo, where sunburnt 1News reporter Guy Heveldt talked about Covid-19’s effect on the Games. There were lights behind Guy, but they were real, so not as cool. A yellow globe against a plain night sky? Please. The last thing we want in a news-related programme is reality, and the sooner TVNZ realises this, the better. 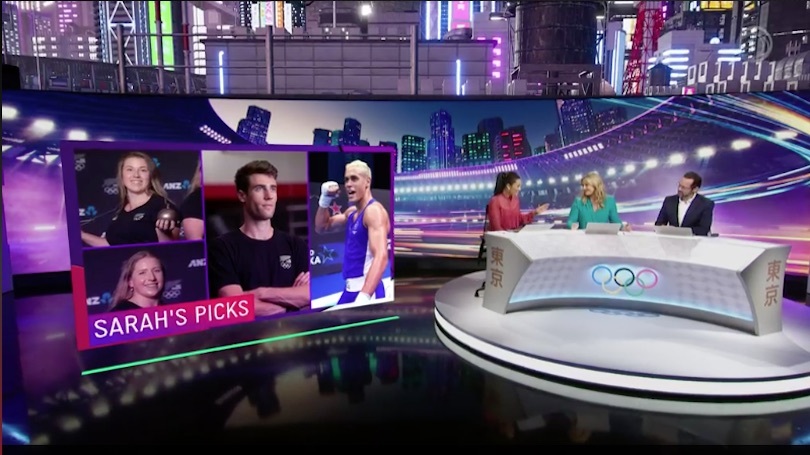 It was officially the snazziest Olympics yet, and it hadn’t even started. TVNZ1 were leaving everything out on the field, but I worried they’d peaked too soon. After an emotional interview with Valerie Adams, Toni and Scotty discussed their game faces. Toni said she didn’t have one, and I stared at my empty box of Shapes and wondered if my game face was made entirely of cheese and bacon. It was time for the opening ceremony. The Olympics were about to begin. “There’s much to look forward to, team,” Scotty told us, but I think I’ve seen it all already.

TVNZ’s Olympic coverage starts every weekday at 12.30pm and weekends at 12pm on TVNZ1 and TVNZ OnDemand.