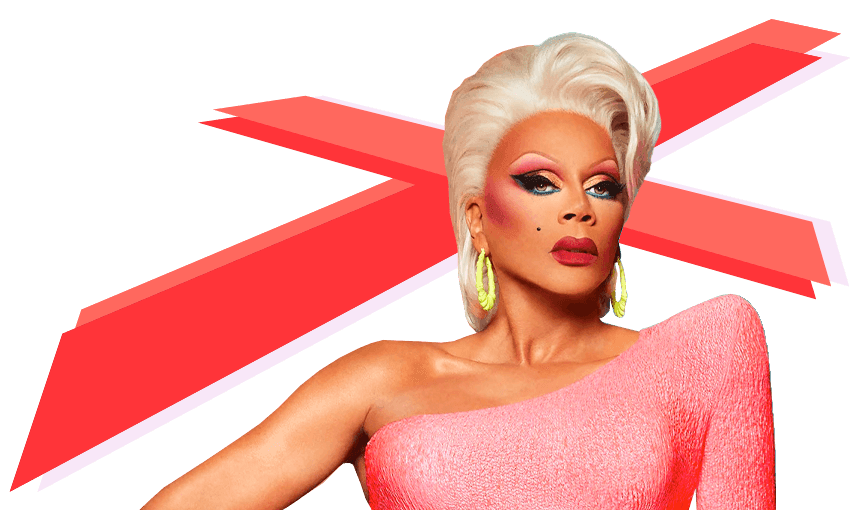 Mama Ru, where are you? (Image Design: Tina Tiller)

Why you can’t watch Drag Race in New Zealand

Mama Ru, where are you? (Image Design: Tina Tiller)

Season 14 of RuPaul’s Drag Race has been running for a few weeks now, but you can’t watch it here … or can you?

A few weeks ago, Drag Race fans across the nation screamed at their various screens on Saturday night, waiting for the new season of their favourite show to drop on Netflix, as it reliably has for nearly five years now. The queens kept screaming, Clarice, because the new season never did arrive.

Sadly, the antics of the stellar cast of season 14 remained unavailable to superfans. They couldn’t watch Willow Pill’s quarantine comedy routine where she performs toaster-in-the-bathtub selfcare to Enya’s ‘Only Time’ – it makes even less sense in context. They couldn’t watch Maddy Morphosis, the first cis straight man to ever participate in the franchise. And they couldn’t watch RuPaul, more engaged with the cast than he’s been in years.

Actually that’s not entirely true. It turns out that you can watch the new season of Drag Race in New Zealand. It’s just not on a service that you’ve heard of, and definitely not one you subscribe to.

That’s because it’s on WOW Presents Plus. The service, launched in 2018, is owned by World of Wonder, the production company responsible for making Drag Race and more or less every piece of Drag Race-related content – that’s a LOT, by the way.

Possibly the only way you’ve heard of the service is if you’re aware of the prize for winning Drag Race UK this year: an original series on WOW Presents Plus, a prize arrived at due to the BBC’s rules banning cash prizes.

The decision to move the flagship series to WOW Presents Plus internationally – in its home country of the US, it remains on VH1 – is probably a branding one. In an era when there are more streaming services than you know what to do with, it makes sense to draw viewers of your biggest show to your own niche platform, rather than simply selling your biggest asset to Netflix.

The good news is that WOW Presents Plus is actually available in New Zealand. The bad news is that you have to pay for it – to the tune of $9.76 a month or $80.25 a year. That’s less than pretty much any streaming service subscription, but it’s also more than nothing, and for Drag Race fans, represents yet another service to pay for.

Is it worth it? It depends on how much Drag Race content you want or need in your life. There’s a truly exhaustive amount of Drag Race spinoffs on WOW Presents Plus – UK, Thailand, Espana Holland, Canada, Italy, All Stars, Secret Celebrity Drag Race, Drag U, and RuPaul’s Drag Race Holi-slay Spectacular – but also some other fun content.

I would say that Trixie and Katya’s show UNHhhh is worth the price of admission, but… it’s available for free on YouTube. I haven’t watched a lot of the other series but if names like Milk’s LegenDAIRY Looks, Cool Mom with Jinkx Monsoon, What’s y Game with Priyanka, Alyssa’ Secret, Bobbin’ Around with Bob The Drag Queen and God Shaves The Queen entice you, then maybe WOW Presents Plus is the streaming service for you.

And of course it’s the streaming service you’ll need if you want to keep up with the current and future seasons of Drag Race, including the upcoming Superstars season. Don’t worry if you’re holding out for Drag Race UK vs The World, that’s coming to TVNZ on Demand on February 4; the second season of Down Under will also be on TVNZ at some point later this year. (Queen of the Universe, the singing spinoff of Drag Race, remains unavailable to watch here as it is a Paramount+ series, but you can watch a lot of it on YouTube.)

There you go! You actually can watch Drag Race season 14, and a whole lot of other content. Whether you want to pay for the pleasure is another question entirely.