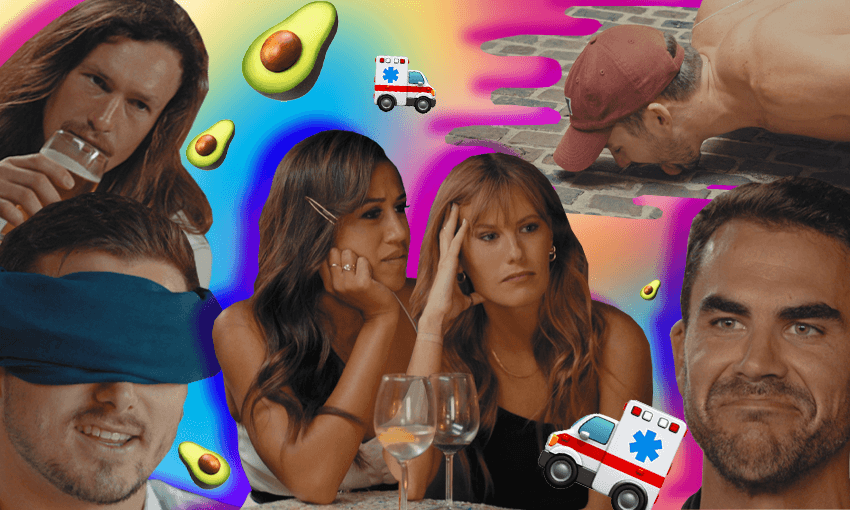 Alex Casey delivers her eighth power rankings for The Bachelorette NZ, where a humble avocado changed everything forever. Click here for previous instalments.

Glass me with the talking bottle, slice my hand off with a fax machine and send me straight to the Centre De Emergencies, because this was the most aggro week of The Bachelorette NZ to date. Hernias erupting! Avocado anaphylaxis! Three stitches for beautiful Quinn! Steve ate toilet paper, Jesse ate dirt and Elliot went for a nudie run, which isn’t strictly a medical emergency but did cause me to briefly die of fright at the UNHOLY sight of BUM CHEEKS on TELEVISION. Not before marriage!

It wasn’t just the chiseled bodies of our Bachelors that took a hammering this week – the so-called “culture” of the house received so many savage blows that all that was left was the distant memory of Liam’s thunderous fart. The cracks that began to show at the cocktail party became cavernous by the time it got to 3am burritos. Honestly, give New Zealander of the Year to this silently growing pile of tinfoil set to the soundtrack of drunk men yelling at each other. That’s Kiwi values.

There’s no denying it folks: Mac was truly, madly, deeply, iconic. On his final night he did a humpy worm dance on the floor, shared his intrepid travel plans to visit… Australia… and pulled off a hat-at-night look better than AMOG could have dreamed. Dab gently into that good night, good sir.

Well, diagnose me with a terminal cause of the awkie lalas, because losing Tavita is going to be a huge blow for both banter levels and hernia representation on screen. We should have known his hernia was going to push him over the edge when he said this paranoid cornflakes yarn about Aaron:

He seemed like he had bloody lost his marbles, which was later explained when he said that his brain was cluttered with “hernia thoughts” and he needed to go home and take care of himself. Pour one out for the MVP (Mindset Very Professional).

Very concerned that Richie is going to phunk with some hearts here, very disappointed we didn’t get to see his opening red carpet move of “whipping up a sweatshirt” for our Bachelorettes. Lily even asked him to tell her MORE about a comic series he made as a child, a show of interest so generous that it might as well have been a marriage proposal. He opened up about having seizures, she opened up about her hearing difficulties, it was all looking pretty Team Lily.

But then: a plot twist. A curve ball. A jar of spilt milk on a dropped crotch. Richie was plucked out AGAIN the next day for a single date with LESINA to climb one of the tallest buildings in South America. Beginning in the bowels of hell and ascending to heaven, the tour guide quizzed them on their favourite sins. Cue Richie talking about his lust for lust (and maybe Lesina?) all the way up the building, all the way home and all the way until breakfast the next day.

This week it was made abundantly clear that Liam’s devotion isn’t to Lily or Lesina, but to maintaining “a precedence of a culture” in the prison. In 100 years from now, alien academics are going to find this season of The Bachelorette NZ on blu-ray and write a thesis called Shrek Charades and Talking Bottles: An Anthropological Study of the Intersection Between Animosity and Culture in the 2020 New Zealand Male. 100% would read.

Pour one out for Michael taking a big “grasp” of fresh air and daring to wade into the burrito brouhaha.

Notably absent this week, last seen in the cellar of the mansion making an Lesina-shaped effigy out of Goosey’s furballs.

Very intrigued by Soccer Steve’s choice to eat a sheet of toilet paper instead of answer Liam’s MENSA-level lateral thinking problem. Would you rather have visible farts or burps that smelt like poop? Tbh I feel like he’s going to have both after noshing down so hard on that one ply.

Nothing epitomises the beauty bubble more than the fact that Mike can just glide around having a face and not really saying much, and Lesina simply can’t stop pelting him with roses. On their single date he hovered behind Lesina like a bodyguard and struggled to answer her probing questions about children, relationships and whether he would describe himself as a “nice” guy.

“Mike’s a good dude,” said Aaron. “He’s a good looking dude but, shit, if he thinks he can walk in here with his tanned skin and his good jawline… he’s got another thing coming.” Hold onto your hat AMOG, because that jawline ain’t going nowhere.

Look, I get that Aaron is public enemy #1 at the moment, but I don’t think that changes the fact that he and Lesina were following each other around like “puppies in a puppy factory” on their romantic bicycle date. He’s not here to make friends, he’s here to make smooches, and I think he will continue to do so as long as he keeps recycling that “have you seen you” line.

Rumour has it that if you say “grow up Peter Pan” three times into a mirror, the ghost of Elliott will turn up behind you choking down an ice cold bowl of guac. What an absolute treat to see Elliott’s rump not once, but twice this week. The first was when he came back from his single date with Lily, where he graciously revealed NOT TELLING written across the forbidden cheeks.

In the words of Tavita, that is “absolute showmanship in my eyes”. The next day, Elliot took another nudie run during a risque game of truth or dare, and the boys celebrated in the courtyard that their sacred bum-based culture had finally been brought back from the grave. Asses to asses, butts to butts etc.

George is hands-down the coolest, calmest and most collected person in the house at the moment, which also means he is def going to get the boot soon. During the burrito brouhaha he was all of us, a rare totem of sanity in a confusing, tinfoil-filled world:

Respect to Terence for pushing back on Jesse’s non-apology after he blew up during the burrito brouhaha. “It was a horrible apology,” he said, “as hollow as his skull.”

It must have been survey week for our radio man Jesse, because mine eyes haven’t seen this much drama and stuntin’ since Polly and Grant announced their divorce live on air. He went from being an aggro burrito boy, to a blindfolded Birdbox kissing boy, to the Boy With the Lily Foot Tattoo. Then Tavita left, and he was a very sad boy.

Can’t imagine a more ringing endorsement of his kiss with Lily than the fact that he went straight home and licked the ground afterwards, though. The morning madhouse just got it’s latest inmate imo.

After a quiet few weeks for Kiwi “mint as” Quinn, it’s looking like our man with the upwardly-mobile hair is opening up his heart, wearing that heart on his sleeve, and slicing open his hand to try and show Lily his lovely lovely heart-blood. Their rage room single date ended with a romantic spot of bloodletting, as Quinn quickly realised he had a deep cut in the side of his hand from an overly-aggressive fax machine encounter.

After three stitches at the Centre De Emergencies, who at this point have their own Bachelorette NZ ward cordoned off, Quinn was back having beers with Lily. Taking a leaf out of Inspector Lesina’s book, she asked him “what do you think I like about you” and, despite losing 40 litres of blood, Quinn was able to answer. “Going on this show was the best decision of my life, because it meant I got to meet you.” Swoony lalas, see you next week.