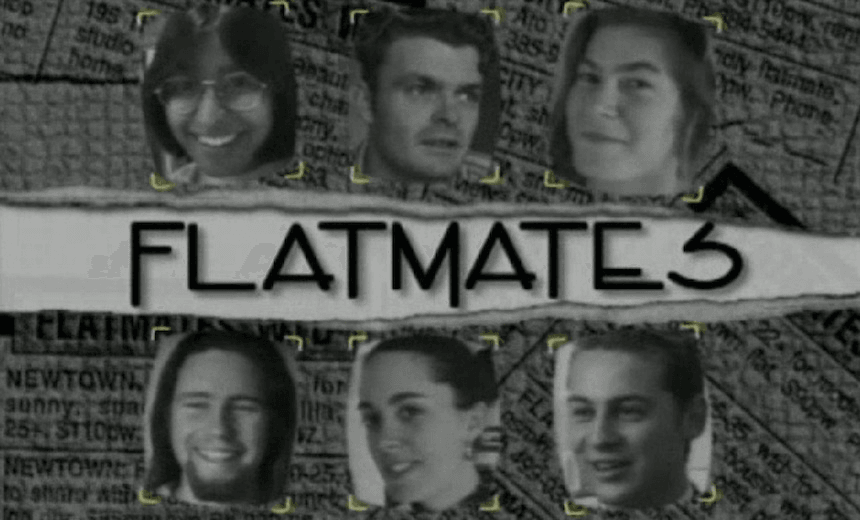 Before the Housewives, before the Bachelorettes, there were the Flatmates. Calum Henderson revisits one of New Zealand’s first gritty, no-frills attempts at reality television.

Like everything else on this dying earth, reality television is subject to a slow and irreversible erosion. Over the years, the genre’s rough edges have been gradually worn down, leaving a pile of smooth pebbles which networks can now pick up and skim effortlessly across multiple nights of primetime scheduling.

It didn’t always used to be this way. Twenty years ago reality shows were raw, confronting and ugly. They were shocking and hilarious, but also excruciatingly boring. In 1997, buoyed by the arrival of youth-oriented channel TV4, New Zealand entered the reality television game with a show that was all of these things. Flatmates, a low-budget “docu-soap” heavily inspired by MTV’s The Real World, was some of the realest reality television ever seen on Kiwi screens.

The show put six young Aucklanders in a sprawling, pre-housing crisis flat for three months, where their lives were to be documented by flatmate Craig, a filmmaker doggedly determined to capture the “nitty gritty.” In the first episode he said, “it’ll be interesting to see what relationships form in the flat.” As prematurely as the second episode, he had professed his love for flatmate Vanessa.

Vanessa was the breakout star of Flatmates – she went on to land a job co-hosting a youth magazine show on TV4 called The Drum. She was self-assured and opinionated and funny – “I don’t like anyone with manufactured dreads,” she declared while appraising Geoffrey’s CD collection. Later the pair thumbed through a pile of old magazines – Pavement and that – and tore out artful Calvin Klein ads to decorate the fridge.

Geoffrey was 19, gay, from “Papatoe”. At the end of the first episode, after a truly diabolical and dangerous flatwarming party, he politely slurred to Craig, behind the camera, “You would be an absolutely lovely person if you would go over tonight’s film and erase every little bit.” Vanessa interjected: “No way! That is real life.”

It was summer when they moved in – everybody was wearing t-shirts – but the flat always looked cold. Cameraman Craig stalked the halls day and night and managed to coax unusually earnest and reflective interviews out of his new flatmates. Ceilla worried about disappointing her parents. Christian bragged about his knowledge of alternative music and “the bar scene”. Natasha, preparing to compete in the Miss Howick pageant, bought a new bed.

Some of the flatmates went to the supermarket together. Craig hung Vanessa’s washing up wrong. Everyone got together to sit inside the wooden frame of a half-built bed and plan their party. The flat-warming started with a loud rock band playing in the garage, and peaked with a violent altercation – “Fuck OFF!” “Get out of my FACE!” – between Vanessa and a mob of gatecrashers. It ended with an overflowing toilet and the threat of a visit from the landlord.

The full first series of Flatmates, and the second series, More Flatmates, screened on Choice TV in the dead of night a few years ago. Episode one was by far the most exciting, but the whole thing stands as an incredible document of life in ’90s New Zealand. One of the flatmates got in a long-distance relationship with an American they met on the internet, and there were long, fiery arguments over the dial-up modem.

New flatmates came and went, but in the end everyone more-or-less hated each other’s guts. They started begging Craig to stop shoving the bloody camera in their faces all the time. Every week seemed to bleaker and more miserable than the last – it all got a little too real.

This Throwback Thursday is brought to you by NZ On Screen, click here to watch their entire reality TV collection.